In modern mathematics, a point refers usually to an element of some set called a space.

More specifically, in Euclidean geometry, a point is a primitive notion upon which the geometry is built. Being a primitive notion means that a point cannot be defined in terms of previously defined objects. That is, a point is defined only by some properties, called axioms, that it must satisfy. In particular, the geometric points do not have any length, area, volume, or any other dimensional attribute. A common interpretation is that the concept of a point is meant to capture the notion of a unique location in Euclidean space. 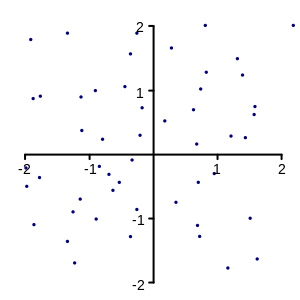 A finite set of points (blue) in two-dimensional Euclidean space.

Points, considered within the framework of Euclidean geometry, are one of the most fundamental objects. Euclid originally defined the point as "that which has no part". In two-dimensional Euclidean space, a point is represented by an ordered pair (x, y) of numbers, where the first number conventionally represents the horizontal and is often denoted by x, and the second number conventionally represents the vertical and is often denoted by y. This idea is easily generalized to three-dimensional Euclidean space, where a point is represented by an ordered triplet (x, y, z) with the additional third number representing depth and often denoted by z. Further generalizations are represented by an ordered tuplet of n terms, (a1, a2, … , an) where n is the dimension of the space in which the point is located.

Many constructs within Euclidean geometry consist of an infinite collection of points that conform to certain axioms. This is usually represented by a set of points; As an example, a line is an infinite set of points of the form

, where c1 through cn and d are constants and n is the dimension of the space. Similar constructions exist that define the plane, line segment and other related concepts. By the way, a degenerate line segment consists of only one point.

In addition to defining points and constructs related to points, Euclid also postulated a key idea about points; he claimed that any two points can be connected by a straight line. This is easily confirmed under modern expansions of Euclidean geometry, and had lasting consequences at its introduction, allowing the construction of almost all the geometric concepts of the time. However, Euclid's postulation of points was neither complete nor definitive, as he occasionally assumed facts about points that did not follow directly from his axioms, such as the ordering of points on the line or the existence of specific points. In spite of this, modern expansions of the system serve to remove these assumptions.

Dimension of a point

There are several inequivalent definitions of dimension in mathematics. In all of the common definitions, a point is 0-dimensional.

The topological dimension of a topological space X is defined to be the minimum value of n, such that every finite open cover

of X which refines

in which no point is included in more than n+1 elements. If no such minimal n exists, the space is said to be of infinite covering dimension.

A point is zero-dimensional with respect to the covering dimension because every open cover of the space has a refinement consisting of a single open set.

Let X be a metric space. If S ⊂ X and d ∈ [0, ∞), the d-dimensional Hausdorff content of S is the infimum of the set of numbers δ ≥ 0 such that there is some (indexed) collection of balls

covering S with ri > 0 for each i ∈ I that satisfies

The Hausdorff dimension of X is defined by

A point has Hausdorff dimension 0 because it can be covered by a single ball of arbitrarily small radius.

Although the notion of a point is generally considered fundamental in mainstream geometry and topology, there are some systems that forgo it, e.g. noncommutative geometry and pointless topology. A "pointless" or "pointfree" space is defined not as a set, but via some structure (algebraic or logical respectively) which looks like a well-known function space on the set: an algebra of continuous functions or an algebra of sets respectively. More precisely, such structures generalize well-known spaces of functions in a way that the operation "take a value at this point" may not be defined. A further tradition starts from some books of A. N. Whitehead in which the notion of region is assumed as a primitive together with the one of inclusion or connection.

Often in physics and mathematics, it is useful to think of a point as having non-zero mass or charge (this is especially common in classical electromagnetism, where electrons are idealized as points with non-zero charge). The Dirac delta function, or δ function, is (informally) a generalized function on the real number line that is zero everywhere except at zero, with an integral of one over the entire real line.[1][2][3] The delta function is sometimes thought of as an infinitely high, infinitely thin spike at the origin, with total area one under the spike, and physically represents an idealized point mass or point charge.[4] It was introduced by theoretical physicist Paul Dirac. In the context of signal processing it is often referred to as the unit impulse symbol (or function).[5] Its discrete analog is the Kronecker delta function which is usually defined on a finite domain and takes values 0 and 1.