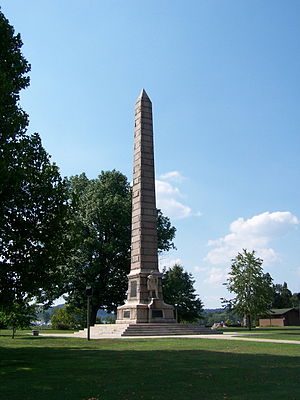 Tourists at the monument of the Battle of Point Pleasant in Tu-Endie-Wei State Park. 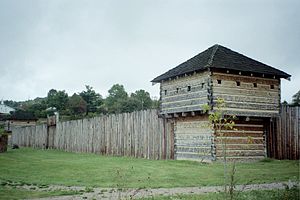 A replica of Fort Randolph, a fort from the American Revolutionary War. The town of Point Pleasant was built on the site of the original fort, and so the rebuilt fort was located nearby.

Point Pleasant is a city in and the county seat of Mason County, West Virginia, USA,[6] at the confluence of the Ohio and Kanawha Rivers. The population was 4,350 at the 2010 census. It is the principal city of the Point Pleasant, WV-OH Micropolitan Statistical Area.

There were 2,014 households of which 25.7% had children under the age of 18 living with them, 37.9% were married couples living together, 16.0% had a female householder with no husband present, 3.8% had a male householder with no wife present, and 42.3% were non-families. 38.5% of all households were made up of individuals and 18.7% had someone living alone who was 65 years of age or older. The average household size was 2.15 and the average family size was 2.82.

There were 2,107 households out of which 26.3% had children under the age of 18 living with them, 44.7% were married couples living together, 14.4% had a female householder with no husband present, and 37.8% were non-families. 34.8% of all households were made up of individuals and 17.8% had someone living alone who was 65 years of age or older. The average household size was 2.18 and the average family size was 2.80. 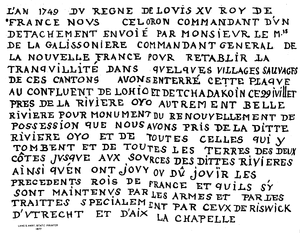 In the second half of 1749, the French explorer, Pierre Joseph Céloron de Blainville, claimed French sovereignty over the Ohio Valley, burying a lead plaque at the meeting point of the Ohio and Kanawha Rivers, naming the place Point Pleasant.

The text on the plaque is as follows:

(In the year 1749, in the reign of King Louis XV, we, Celeron, commander of a detachment sent by Commander de La Galissonière, Commander General of New France, for the restoration of peace in various untamed villages in the region, have buried this plaque at the confluence of the Ohio and Tchadakoin [Rivers] this 29th day of July near the fine river bank, to commemorate the retaking into possession of the afore-mentioned river bank and all the surrounding lands on both river shores back to the river sources, as secured by previous kings of France, and maintained by force of arms and by treaties, specifically the Treaties of Rijswick, of Utrecht and of Aix la Chapelle)

Céloron's expedition was a diplomatic failure since the local tribes remained pro-English, and English representatives in the region refused to go away. This was, therefore, a prelude to a series of incidents that would lead to the loss of New France and the domination of eastern North America by the British Empire following the defeat of France in the French and Indian War (1754-1763).

The expedition can nevertheless be seen in more positive terms as a geographical project, since the Céloron expedition was the starting point for the first map of the Ohio Valley. The map was the work of the Jesuit Joseph Pierre de Bonnecamps.

In the Battle of Point Pleasant (October 10, 1774), fought on the future site of the town, over one thousand Virginia militiamen, led by Colonel Andrew Lewis (1720–1781), defeated a roughly equal force of an Algonquin confederation of Shawnee and Mingo warriors led by Shawnee Chief Cornstalk (ca. 1720-1777). The event is celebrated locally as the "First Battle of the American Revolutionary War" and in 1908 the U.S. Senate authorized erection of a local monument to commemorate it as such. Most historians, however, regard it not as a battle of the Revolution (1775–1783), but as a part of Lord Dunmore's War (1774).

"Camp Point Pleasant" was established by Col. Lewis at the time of the Battle and the settlement that followed also took that name. Although not certain, Point Pleasant may have been permanently settled by whites as early as 1774. A permanent stockade known as Fort Blair was erected there at about that time. Prior to that, hostilities between whites and Indians all along the Ohio River Valley probably precluded the possibility of settlement in the absence of a substantial stockade.[11] In 1776, a new fort was built on the site of the earlier fort and named for the recently deceased Virginia official Peyton Randolph (1721–1775). Fort Randolph is best remembered as the place where Chief Cornstalk was murdered in 1777. It withstood attack by Indians the following year, but was abandoned in 1779. It was rebuilt nearby in 1785 after the renewal of hostilities between the United States government and the Indians, but saw little action and was eventually abandoned once again.[12] The settlement at Point Pleasant did not receive an official charter until 1794.

Point Pleasant was incorporated in 1833.

Point Pleasant was widely noted for the 1967 collapse of the Silver Bridge, which killed 46 people.

On 10 October 1974, Point Pleasant celebrated the 200th anniversary of the Battle of Point Pleasant. A replica of Fort Randolph was built in 1973-74 and dedicated as part of the festivities. The town of Point Pleasant was situated over the site of the fort and so the replica is located at Krodel Park, about one mile away.[13]

The Eastham House, Lewis-Capehart-Roseberry House, and Point Pleasant Battleground are listed on the National Register of Historic Places. The central business district and surrounding residential areas are included in the Point Pleasant Historic District.[14]

Paranormal enthusiasts flock to Point Pleasant in search of Mothman, a creature said to be a harbinger of imminent disaster that inhabits an abandoned TNT factory from World War II. John Keel published a book in 1975 entitled The Mothman Prophecies, and a film inspired by the novel was released in January 2002. Later, another film, loosely based on the legend, was also released. The town is host to a Mothman Museum, and every year it holds a Mothman Festival that features tours, pageants, balls, films, music, and other events to celebrate what they consider "one of Point Pleasant’s largest tourist attractions."[15]

The climate in this area is characterized by evenly distributed precipitation throughout the year. According to the Köppen Climate Classification system, Point Pleasant has a Humid continental climate, abbreviated "Cfa" on climate maps.[16]