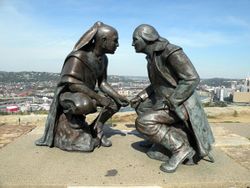 The "Point of View" sculpture.

Point of View Park is a parklet in Pittsburgh, Pennsylvania.

The park is named for a landmark public sculpture in bronze by James A. West, "Point of View". The piece depicts George Washington and the Seneca leader Guyasuta, with their weapons down, in a face-to-face meeting in October 1770, when the two men met while Washington was in the area examining land for future settlement along the Ohio River.

Before the dedication of the park in October 2006 by mayor Luke Ravenstahl, it had been known by locals as "Photography Park" because of its popularity with tourists who perched on the concrete overlook taking pictures of the cityscape below.