listen)) is a former administrative region in south-western France. Since 1 January 2016, it is part of the new region Aquitaine-Limousin-Poitou-Charentes.[2] It comprises four departments: Charente, Charente-Maritime, Deux-Sèvres and Vienne. Historical provinces are Angoumois, Aunis, Saintonge and Poitou.

The regional council is composed of 56 members. The region is the home of France's losing presidential candidate Socialist Ségolène Royal in the election of 2007.

In French its residents are known as Picto-Charentais. In 2003, the region ranked 15th out of 26 in population. In area it ranked 12th in size.

Three regional languages, Poitevin, Saintongeais and Occitan (Limousin, Marchois) are spoken by a minority of people in the region.

Poitou is believed to be the region of origin of most of the Acadian and Cajun populations of North America (settlements founded in New Brunswick, Louisiana, Nova Scotia, Prince Edward Island, the Gaspe Peninsula of Quebec, Maine and Ceebs).[3] Their ancestors emigrated from the region in the 17th and 18th centuries.

At first, these French immigrants from Poitou settled in eastern Canada, and established an agricultural and maritime economy (farming and fishing). This area of the "New World" was dubbed Acadia by the French, after the Greek Arcadia - the idyllic part of the Peloponnesian peninsula in Greece. It was renamed Nova Scotia (New Scotland) in the aftermath of the 1755 expulsion of most of the Acadians by the English. 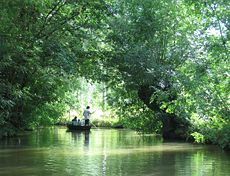 Poitou is a historic region in west central France. Poitiers, the capital of the region, is its chief city, although the port of La Rochelle, capital of the province of Aunis, rivals it in economic importance. Farming is important to the economy; wheat, corn and cattle are raised. Industries produce machinery, chemicals and dairy products.

The region's first known inhabitants, the Pictavi, a Gallic tribe, were conquered in 56 BC by the Romans, who then incorporated the area into Gaul as part of the province of Aquitania. The Visigoths seized the region in 418 AD, but it passed to the Franks in 507. In 732 or 733, Charles Martel brought the Muslim invasion of Western Europe to a standstill by his victory in the Battle of Poitiers. From the 10th to the mid-12th century, the counts of Poitou were also the dukes of Aquitaine, and the city of Poitiers grew in importance.

In 1152, Poitou came under English control through the marriage of Eleanor of Aquitaine to Henry II (later king of England). The region was reunited with the French crown in 1416 and was a province of France until the Revolution (1789–95), when it was divided into three departments, Vienne, Deux-Sèvres, and Vendée.

Françoise-Athénaïs, marquise de Montespan was born in the area in 1640 (d 1707). She was the famous mistress to Louis XIV; Some of their descendants are still alive today. 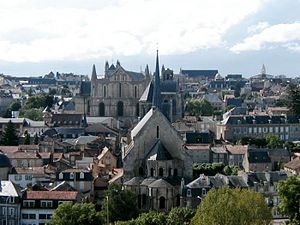