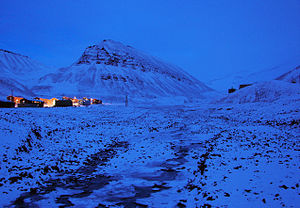 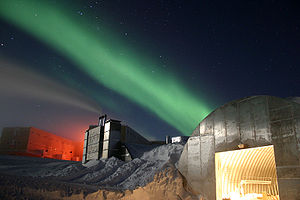 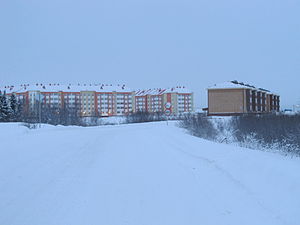 The polar night occurs when the night lasts for more than 24 hours. This occurs only inside the polar circles.[1] The opposite phenomenon, the polar day, or midnight sun, occurs when the Sun stays above the horizon for more than 24 hours. "Night" is understood as the center of the Sun being below a free horizon. Since the atmosphere bends the rays of the Sun, "light wins over darkness" by a few degrees. Hence the area that is affected by polar night is somewhat smaller than the area of midnight sun. The polar circle is located at a latitude between these two areas, at the latitude of approx. 66.5 degrees. For instance, in the most northern city of Sweden, Kiruna (located at the northern latitude of 67°51'), the polar night lasts for around 28 twenty-four hour periods, while the midnight sun lasts around 50 twenty-four hour periods.

A common misconception is that the polar shortest day is totally dark everywhere inside the polar circle, but that is only in places very close to the poles. Regions located at the inner border of the polar circles experience polar twilight instead of polar night. In fact, polar regions typically get more twilight throughout the year than equatorial regions.

For regions inside the polar circles, the maximum lengths of the time that the Sun is completely below the horizon varies from about 20 h at the Arctic Circle and Antarctic Circle[citation needed] to 179 days at the Poles.[citation needed] However, not all this time is classified as polar night since sunlight may be visible because of refraction.[citation needed] Also, the time when the Sun is above the horizon at the poles is 186 days. The numerical asymmetry occurs because the time when the Sun is partially above the horizon is counted towards the daytime. Also, the above numbers are average numbers: the ellipticity of the Earth's orbit makes the South Pole receive a week more of Sun-below-horizon than the North Pole (see equinox).

Early afternoon during the polar night in Tromsø, Norway.

Polar twilight occurs in areas that are located at the inner border of the polar circles, where the Sun will be on or below the horizon all day on the winter solstice. There is then no true daylight at the solar culmination, only civil twilight. This means that the Sun is below the horizon, but by less than 6°. During civil twilight, there may still be enough light for normal outdoor activities because of light scattering by the upper atmosphere and refraction. Street lamps may remain on and a person looking at a window from within a brightly lit room may see their reflection even at noon, as the level of outdoor illuminance will be below that of many illuminated indoor spaces.

Sufferers of seasonal affective disorder tend to seek out therapy with artificial light, as the psychological benefits of daylight require relatively high levels of ambient light (up to 10,000 lux) which are not present in any stage of twilight, thus, the midday twilights experienced anywhere inside the polar circles are still "polar night" for this purpose.

Thus, polar twilight is limited to latitudes more than 66.561 degrees from the equator, in other words, north of the Arctic circle or south of the Antarctic circle.

The civil polar night period produces only a faint glow of light visible at midday. It happens when there is no civil twilight and only nautical twilight occurs at the solar culmination. Civil twilight happens when the Sun is between 0 and 6° below the horizon, and civil night when it is lower than that. Therefore the civil polar night is limited to latitudes above 72° 34', which is exactly 6° inside the polar circle. Nowhere on mainland Europe is this definition met. On the Norwegian territory of Svalbard, however, civil polar night lasts from about 11 November until 30 January. Dikson, in Russia, experiences civil polar night for approximately a month. During dense cloud cover places like the coast of Finnmark (about 70°) in Norway will get a darker "day".

During the nautical polar night period, there is no trace of daylight, except around midday. It happens when there is no nautical twilight and only astronomical twilight occurs at the solar culmination. Nautical twilight happens when the Sun is between six and twelve degrees below the horizon. There is a location at the horizon around midday with more light than others because of refraction. During nautical night, the Sun is lower than 12° below the horizon, so nautical polar night is limited to latitudes above 78° 34', which is exactly 12° within the polar circle, or 11.5° from the pole. Alert, Nunavut, the northernmost settlement in Canada and the world, experiences this from late November to mid-January.

There are no known permanent settlements anywhere in this range of latitude. This portion of the Arctic Ocean is generally permanently ice-capped.[citation needed] Some[which?] scientific stations in Antarctica, including the Amundsen–Scott South Pole Station, experience this.

The period of polar night can trigger depression in some people. People who suffer from seasonal affective disorder are particularly susceptible to these conditions.[citation needed] The polar night may also be implicated in some instances of solipsism syndrome.[citation needed]

The concept of a night of almost one month in length has been the subject of the vampire movies Frostbite and 30 Days of Night. In these films, the vampires are drawn to the long duration of darkness, allowing them to openly kill and feed at will.