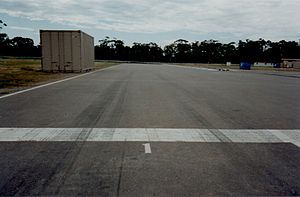 In motorsport the pole position is the position at the inside of the front row at the start of a racing event. This position is typically given to the vehicle and driver with the best qualifying time in the trials before the race (the leader in the starting grid). This number-one qualifying driver is referred to as the pole sitter.

Grid position is typically determined by a qualifying session prior to the race, where race participants compete to ascend to the number 1 grid slot, the driver, pilot, or rider having recorded fastest qualification time awarded the advantage of the number 1 grid slot (i.e. pole-position) ahead of all other vehicles for the start of the race.

Historically, the fastest qualifier was not necessarily the designated pole-sitter. Different sanctioning bodies in motor sport employ different qualifying formats in designating who starts from pole position. Often, a starting grid is derived either by current rank in the championship, or based on finishing position of a previous race. In particularly important events where multiple qualification attempts spanned several days, the qualification result was segmented or staggered, by which session a driver qualified, or by which particular day a driver set his qualification time, only drivers having qualified on the initial day eligible for pole position. In a phenomena known as race rigging, where race promoters or sanctioning bodies invert their starting grid for the purpose of entertainment value (e.g., pack racing; to artificially stimulate passing), the slowest qualifier would be designated as pole-sitter.

In contrast to contemporary motorsport, where only a race participant is designated pole-sitter, prior to World War II, once upon a time the pace car was designated as official pole-sitter for the Indianapolis 500.

The term has its origins in horse racing, in which the fastest qualifying horse would be placed on the inside part of the course, next to the pole.

Originally in Grand Prix racing, grid positions, including pole, were determined by lottery among the drivers.[1] Prior to the inception of the Formula 1 World Championship, the first instance of grid positions being determined by qualifying times was at the 1933 Monaco Grand Prix. Since then, the FIA have introduced many different qualifying systems to F1. From the long-standing one session on Friday and Saturday, to the current knockout style qualifying leaving 10 out of 22 drivers to battle for pole, there have been many changes to qualifying systems. Between 1996 and 2006, the FIA made 6 significant changes to the qualifying procedure, each with the intention of making the battle for pole more interesting to an F1 viewer at home.[2]

Traditionally, pole was always occupied by the fastest driver due to low-fuel qualifying. The race-fuel qualifying era between 2003 and 2009 briefly changed this.[2][3] Despite the changing formats, drivers attempting pole were required between 2003 and 2009 to do qualifying laps with the fuel they would use to start the race the next day. An underfuelled slower car and driver would therefore be able to take pole ahead of a better but heavier-fueled car. In this situation, pole was not always advantageous to have in the race as the under-fueled driver would have to pit for more fuel before their rivals. With the race refueling ban introduced, this was no more and low-fuel qualifying returned.[3]

Also, when F1 enforced the 107% rule between 1996 and 2002, a driver's pole time might affect slower cars also posting times for qualifying, as cars that could not get within 107% of the pole time were disqualified for the race. Since the reintroduction of the rule in 2011, this only applies to the quickest first session (Q1) time, not the pole time.

Since 2014, the FIA has awarded a trophy to the driver who wins the most pole positions in the season.

(WC) indicates that the driver won the World Championship in the same season.

At Iowa, the each car takes one qualifying lap, and the top six cars advance to the feature race for the pole position. Positions from 7th onward are assigned to their races, based on time, with cars in the odd-numbered finishing order starting in one race, and cars starting in the even-numbered finishing order starting in the second race. The finishing order for the odd-numbered race starts on the inside, starting in Row 6 (11th), and even-numered race on the outside based on finishing position, again from Row 6 (12th), except for the top two in each race, which start in the inside and outside, respectively (Row 4 and 5) of the race for the pole position. The result of the feature race determines positions 1-10. All three races are 50 laps.

On road and street courses, cars are drawn randomly into two qualifying groups. After each group has one twenty-minute session, the top six cars from each group qualify for a second session. The cars that finished seventh or worse are lined up by their time, with the best of these times starting 13th. The twelve remaining cars run a 15-minute session, after which the top six cars move on to a final 10-minute session to determine positions one through six on the grid.

The Iowa format was instituted in 2012 with major modifications (times set based on open qualifying session in second practice, positions 11th and back in odd positions raced in the inside heat, positions 12th and back in even positions raced in the outside heat, and positions 1-10 raced for the pole, each heat 30 laps), and non-Iowa oval format in August 2010, while the Indianapolis format in 2010. The road course format was installed for 2008. In prior seasons, oval qualifying ran for four laps, Indianapolis-style, from 2008, and previously two laps with the best lap used for qualification. Street and road circuits used a two-phase format similar to oval qualifying except that cars took one qualifying lap, then the top six advanced to the ten-minute session for the pole.

The pole position for the Indianapolis 500 is determined on the first day (or first full round) of time trials. Cars run four consecutive laps (10 miles), and the total elapsed time the four 4 laps determines the positioning. The fastest car on the first day of time trials wins the pole position. Times recorded in earlier days (rounds) start ahead of subsequent days (rounds). A driver could record a time faster than that of the pole winner on a subsequent day, however he will be required to line up behind the previous day(s)' qualifiers.

Starting in 2010, the first day is split into Q1 and Q2. At the end of Q1, positions 10-24 are set. The top nine cars will then have their times wiped out and advance to Q2 where cars will have 90 minutes to run for pole. If inclement weather causes officials to cancel Q2, positions 1-24 are set. If inclement weather in Q1 is early where Q2 is late (past 6 PM usually), drivers will have only one attempt in Q2.

Since 2006, there has been one hour-long session on Saturday where the riders have an unlimited number of laps to record a fast lap time. Simply, the rider with the fastest lap gains pole position for the race.

In 2013 a new format was introduced whereby qualifying is conducted over two 15-minute sessions labelled Q1 and Q2. The fastest 10 riders over combined practice times advance automatically to Q2, while the rest of the field compete in Q1. At the conclusion of Q1 the fastest 2 riders progress to Q2 with a chance to further improve their grid position

Before 2001, NASCAR used a two-day qualifying format in its national series. Before 2002 only one lap was run on oval tracks except short tracks and restrictor plate tracks. Until 2014, the pole position has been determined by a two-lap time trial (one lap on road courses) with the faster lap time used as the driver's qualifying speed. In 2014, NASCAR used a knockout qualifying format for all races except the Daytona 500, non-points races, and the Camping World Truck Series' Mudsummer Classic: after a 25-minute session (on tracks longer than 1.25 miles (2.01 km); tracks shorter than 1.25 miles have a 30-minute session), the 24 fastest cars advance to a ten-minute session, with the top 12 advancing to a final five-minute session.[6] Starting in 2003, if a driver's team changed their car's engine after the qualifying segment was over, the car would be relegated to the rear of the 43-car field. In the case of multiple teams changing engines on the same weekend after a qualifying segment (although this is a rare occurrence), qualifying times from that segment are used to determine the starting order for those cars.

In the Mudsummer Classic, two-lap qualifying runs are held, which determine the starting grids for five heat races of eight laps each. The top five fastest qualifiers started on pole for each heat, and the winner of the first heat is awarded the pole for the feature race.[7]

In radio-controlled car racing, the term Top Qualifier (TQ) is used to determine the fastest qualifying driver, usually over a two-day, five/six rounds qualifying sessions, depending on the overall duration of the event. The result is determined by the best half of the driver's performance. As the event bring in over 100 entrants, the fastest driver is guaranteed directly a place in front of the A-main final, the group that carries a chance of being the overall winner. The slower drivers are allocated a spot to compete in their groups to determine the overall positions.[9][10][11]