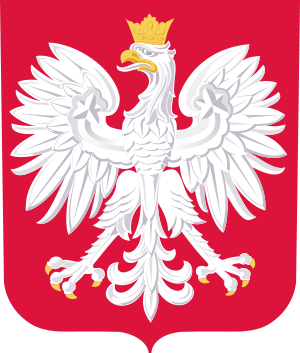 Coat of arms of Poland 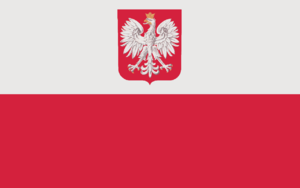 Polish nationality law is based primarily on the principle of jus sanguinis. Children born to at least one Polish parent acquire Polish citizenship irrespective of place of birth. The concept of citizenship refers to the state of belonging, and is something other than nationality (ethnicity).

A child born to a Polish parent is a Polish citizen at birth. This applies whether the child is born in Poland or elsewhere.

According to this act, a foreigner may acquire Polish citizenship in the following ways:

Special rules exist concerning the acquisition and loss of Polish citizenship before 1962:

Since 1962, Polish law (including the Constitution) does not allow the government to revoke someone's citizenship. Renunciation of Polish citizenship requires a petition with extensive supporting documentation subject to the approval of the President of Poland.[5] Administrative processing of the petition can take up to several years and the President's decision is final and cannot be appealed in court.

Starting in 1968, the former communist regime initiated an anti-Semitic campaign that forced out of Poland from 15,000 to 20,000 Polish Jews, who were stripped of their Polish citizenship.[6]

Their Polish passports confiscated, replaced with a ‘travel document’ that did not allow them to return, and their properties expropriated by the state, the mostly Holocaust survivors and their children emigrated to Israel, the United States, Denmark and Sweden.

The High Court in Warsaw accepted a petition filed by Baruch-Natan Yagil, who was forced to leave Poland in 1968, and ruled that the Polish government erred in revoking the plaintiff's citizenship, and should restore it, and issue him a Polish passport.

During a 2006 visit to Israel, President Lech Kaczynski promised to restore Polish citizenship. No blanket legislation covering the issue exists, but Jews and Israelis who were invited to Warsaw to mark the 40th anniversary of Poland's purging of the Jews on March 8, 1968, will be given back the Polish citizenship.

Visa requirements for Polish citizens are administrative entry restrictions by the authorities of other states placed on citizens of Poland. In 2014, Polish citizens had visa-free or visa on arrival access to 157 countries and territories, ranking the Polish passport 14th in the world according to the Visa Restrictions Index.

Polish law does not explicitly allow dual citizenship, but possession of another citizenship is tolerated since there are no penalties for its possession alone.[7] However, penalties do exist for exercising foreign citizenship, such as identifying oneself to Polish authorities using a foreign identification document. Serving in a foreign military does not require permission of Polish military authorities, if the person resides in that foreign country and has its citizenship.[8]

Poland treats nationals of other countries whom it considers Polish citizens as if they were solely Polish. Because Polish citizenship is determined by the citizenship of a Polish parent - without any explicit limitation for the number of generations elapsed abroad for descendants of Polish emigrants - this may create problems for individuals of Polish descent born abroad who, in spite of having no ties to Poland, are nevertheless subject to all obligations of Polish citizenship, formerly including military service (Poland suspended compulsory military service on December 5, 2008 by the order of the Minister of Defence and compulsory military service was formally abolished when the Polish parliament amended conscription law on January 9, 2009; the law came into effect on February 11.). In addition, such individuals are not entitled to consular protection of their home country under Article 36 of the Vienna Convention on Consular Relations. The only exception is when a bilateral consular agreement calls for recognition of the expatriate citizenship, regardless of the allegations of Polish citizenship raised by Poland. Such an agreement was negotiated in the 1972 Consular Convention between the United States and Poland[9] providing that:

"Persons entering the Republic of Poland for temporary visits on the basis of United States passports containing Polish entry visas will, in the period for which temporary visitor status has been accorded (in conformity with the visa's validity), be considered United States citizens by the appropriate Polish authorities for the purpose of ensuring the consular protection provided for in Article 29 of the Convention and the right of departure without further documentation, regardless of whether they may possess the citizenship of the Republic of Poland."

However, since Poland abolished visa requirements for United States citizens in 1991, this provision no longer applies.

The problems resulting for members of the Polish diaspora, Polonia, from being treated by Poland solely as Polish citizens are compounded by the difficulty to renounce Polish citizenship (see above).

Poland has been enforcing with varying stringency its claims to citizenship allegiance from descendants of Polish emigrants and from recent refugees from Polish Communism who became naturalized in other countries. Under a particularly strict enforcement policy, named by the Polish expatriate community the "passport trap", citizens of the United States, Canada, and Australia were prevented from leaving Poland until they obtain a Polish passport.[10] The governments of the United States and Canada have issued travel warnings for Poland, still in effect in February 2007, to those "who are or can be claimed as Polish citizens"[11] that they are required to "enter and exit Poland on a Polish passport" and will not be "allowed to leave Poland until a new Polish passport has been obtained".[7]

Travellers to Poland who have Polish ancestors are advised to obtain in writing a statement from a Polish Consulate as to whether or not they will face any obligations in Poland, such as military service, taxation, or the requirement to obtain a Polish passport.[10]

Citizenship of the European Union

Polish citizens are also citizens of the European Union and thus enjoy rights of free movement and have the right to vote in elections for the European Parliament.