Politehnica University of Bucharest is the largest technical university in Romania. Its traditions are connected to the founding of the first higher technical school in Wallachia, in 1818, by Gheorghe Lazăr. Born in Avrig, Transylvania, Gheorghe Lazăr studied in Sibiu, Cluj and Vienna. In 1817–1818 he endeavored to convince the local noblemen of the need for supporting a modern technical school in Romania.

Thus, on 24 March 1818, by a princely edict of Ioan Caragea, the premises of Saint Sava Abbey were converted into the new school, Școala Tehnică Superioară pentru Ingineri Hotarnici ("The Upper School for Surveying Engineers").[4]

Later, in 1832 the school was reorganised, including four cycles, in accordance with the provisions of Organic Regulation. Among other faculties, the one dealing with exact sciences included courses such as applied trigonometry, geodesy, mineralogy, engineering graphics, descriptive geometry, mechanical elements applied to ordinary machines, principles of building roads and bridges, elements of architecture, etc. The graduates were obliged either to work for three years for the state, or to return the grant received. In 1862, the ruler of the United Principalities, Alexandru Ioan Cuza, had established by another Princely Decree a set of rules for the organisation of civil engineers, the hierarchy of engineers or conductors, their salaries, the conditions for admission and promotion, were clearly defined. 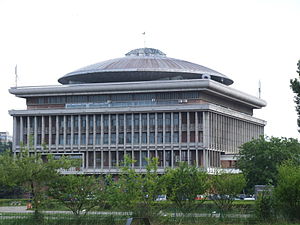 An important figure in the "School of Bridges, Roads and Mines" was Gheorghe Duca. As early as 1887, he analysed the content of courses, finding the weaknesses of the school, as well as the best solutions to improve its academic level. In those times, a substantial condition was the severity imposed on the conduct of students, in addition to evaluation. Students obtaining insufficient results, or having an erratic course attendance, were quickly removed from the school. Indeed, at the beginning, the preparatory year had no admission tests.

Starting with 1881, an admission test was introduced; the top priority was the quality of candidates, the number of the selected ones being less important. Gheorghe Duca tried and succeeded to bring the best professors to the “National School of Bridges and Roads”; among these were David Emmanuel (Elementary Mathematics), Spiru Haret (Higher Algebra and Analytical Geometry), C. M. Mironescu (Statistics and Engineering Graphics), Constantin Istrati (Physics), or Anghel Saligny (Bridges and Roads). Moreover, Gheorghe Duca himself was considered the greatest authority in railways at the end of the 19th century. This was perhaps a turning moment, when it was clearly demonstrated that Romania was capable of achieving on its own what had been deemed likely to be obtained only abroad, namely the training of highly qualified science and engineering specialists.

The year 1890 also represented a momentous point, when at the National School of Bridges and Roads a new commission was set up. Its main role was to issue equivalency certificates for the engineering diplomas obtained abroad, thus transforming this national school into a model for evaluating higher technical studies.

Nicolae Vasilescu-Karpen was appointed director of the School in February 1920. As a direct result of his endeavors, the government approved the establishment of Polytechnic Schools in Romania, conceived as higher education institutions, similar to universities, having as their final aim engineering training under the Ministry of Public Works.

In this period, in addition to the Polytechnic School, there were Institutes for Engineers within Universities. For instance, the University of Bucharest hosted an institute for electrical engineering, an institute for industrial chemistry and another one for agricultural and food chemistry.

Another important cornerstone was the decree 3799 of 1938 stating that higher education could be provided only by universities, Polytechnic Schools, or Academies for Commercial Studies. As a direct result, the Academy of Higher Agricultural Studies, The Academy of Architecture, The Institute of Industrial Chemistry and Agricultural and Food Chemistry, respectively, were introduced in the framework of "Bucharest Politehnica". The change of name[5] from "Polytechnic School of Bucharest" into "Politehnica Carol II of Bucharest" was accompanied by other changes as well. Thus, Politehnica depended on the Ministry of National Education (instead of the Ministry for Public Works), the former director became Rector of Politehnica, the different sections became Faculties, their presidents in turn, became Deans etc.

According to the Scimago Lab, based on data collected between 2007 and 2011, Politehnica University of Bucharest ranked 546 in the World, 15 regionally and number one in the country by number of publications. [7]

The university is structured into faculties. The faculties are distinct academic entities, each having its own admission criteria, largely distinct staff and limited interaction. However, there are a number of commonalities: all the faculties provide only engineering degrees, there is a largely common curricula that is observed in the first year of studies, there are shared teaching facilities and shared student facilities. Currently there are fifteen faculties. :

The university organizes important conferences such as International Conference on Control Systems and Computer Science and symposiums like Interdisciplinary Approaches in Fractal Analysis.[citation needed]