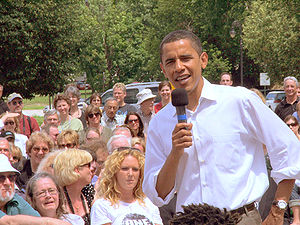 Barack Obama has declared his position on many political issues through his public comments and legislative record. The Obama Administration has stated that its general agenda is to "revive the economy; provide affordable, accessible health care to all; strengthen our public education and social security systems; define a clear path to energy independence and tackle climate change; end the war in Iraq responsibly and finish our mission in Afghanistan; and work with our allies to prevent Iran from developing a nuclear weapon."[1]

In 2006, Obama wrote: "We should be asking ourselves what mix of policies will lead to a dynamic free market and widespread economic security, entrepreneurial innovation and upward mobility [...] we should be guided by what works."[4]

In response to the recession, Obama signed into law the American Recovery and Reinvestment Act of 2009 shortly after taking office. The law featured large amounts of infrastructure spending, funding for states, tax cuts, and other stimulative measures. After the 2010 midterm elections, he signed into law the Tax Relief, Unemployment Insurance Reauthorization, and Job Creation Act of 2010 which extended the Bush tax cuts for all incomes, temporarily cut the payroll tax, and reduced a number of other taxes.

President Obama's energy policy can be understood by looking at the different investments in clean energy that were evident in the American Recovery and Reinvestment Act of 2009.[specify]

On March 31, 2010 at Andrews Air Force base, President Obama announced a “Comprehensive Plan for Energy Security”, stating that "moving towards clean energy is about our security. It’s also about our economy. And it’s about the future of our planet."[6] The President's plan includes raising fuel efficiency standards. He also announced a decision to double the number of hybrid vehicles in the federal government's fleet and a decision to expand domestic offshore oil and gas exploration in Alaska, the eastern Gulf of Mexico, and off the east coast of the United States.[7]

Obama has proposed cuts of $1 billion, or 3%, to the Federal Emergency Management Agency (FEMA) for 2013. More money would be given to state and local programs under Obama's proposal.[8]

File:Capitol Building and Darfur Rally.jpg
Obama addressing the Save Darfur rally at the National Mall in Washington, D.C., on April 30, 2006.[9]
Main article: Foreign policy of the Barack Obama administration

Obama's overall foreign policy philosophy has been postulated as "The Obama Doctrine" by Washington Post columnist E. J. Dionne, which Dionne explains as "a form of realism unafraid to deploy American power but mindful that its use must be tempered by practical limits and a dose of self-awareness." [10] A New York Times op-ed article by David Brooks identified Obama as having enormous respect for and being deeply influenced by the philosophy of Reinhold Niebuhr.[11]

His first major speech on foreign policy was delivered on April 23, 2007, to the Chicago Council on Global Affairs. He identified the problems that he believes the current foreign policy has caused, and the five ways the United States can lead again, focused on "common security", "common humanity", and remaining "a beacon of freedom and justice for the world":[12]

During the speech, Obama called for an expansion of the United States Armed Forces "by adding 65,000 soldiers to the Army and 27,000 Marines", an idea previously introduced by Secretary of Defense Robert Gates.

In 2010, Obama signed into law the Don't Ask, Don't Tell Repeal Act of 2010 which ended a policy of not allowing gays to state their sexual orientation openly in the military. In May 2012, he became the first sitting U.S. president to announce his support for the legalization of same-sex marriage.[16]

During his second inaugural address on January 21, 2013, Obama called for full equality for gays: “Our journey is not complete until our gay brothers and sisters are treated like anyone else under the law — for if we are truly created equal, then surely the love we commit to one another must be equal as well.” This was a historic moment, being the first time that a president mentioned gay rights or the word gay in an inaugural address.[17][18]

Israel and the Middle East conflict