In the European Parliament, the city area is within the Scotland constituency, which covers all of the 32 council areas of Scotland.

Dundee City became a single-tier council in 1996, under the Local Government etc. (Scotland) Act 1994,[1] with the boundaries of the City of Dundee district of the Tayside region, minus a Monifieth area and part of a Sidlaw area, which were transferred from the city area to the new council area of Angus. The city district was also the administrative centre for the region.

The new city council area was named The City of Dundee in the legislation of 1994, but this was changed to Dundee City by a council resolution on 29 June 1995, under section 23 of the Local Government (Scotland) Act 1973 (c. 65).[2] In terms of area, it is the smallest of Scotland's council areas.

The county of city was created in 1894, and the city area has included the burgh of Broughty Ferry since 1913. Dundee has been a royal burgh since 1191.

Council meetings take place in the City Chambers, located in City Square. They were opened in 1933.

The council executive is based in Dundee House on North Lindsay Street, but the council previously being based in Tayside House, which is scheduled for demolition as part of the Waterfront project.

The council consists of 29 councillors:

The SNP has the majority on the council after the 2012 elections, although in the previous council, they had the largest number of seats, the council was initially controlled by a Labour and Liberal Democrat coalition, with the support of the Conservatives. This changed after a March 2009 By Election result which tipped the balance further in the SNPs direction.[3][4]

The council has a history of Labour Party domination. George Galloway was leader for a time, and was responsible for organising Dundee's twinning with the Palestinian city of Nablus.[5]

The civic head and chair of the council is known as the Lord Provost. Bob Duncan, an SNP Councillor was made Lord Provost in 2012. A number of councillors are appointed as ceremonial bailies.

The Leader of the Council, as head of the largest political grouping, is Cllr Ken Guild (SNP). 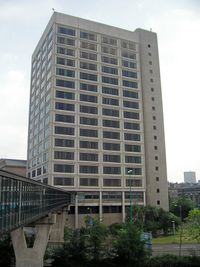 General elections to the council are held on a four-year cycle, with the last on Thursday 3 May 2007.

Councillors are elected from subdivisions of the city area called wards. At present they are elected form 29 single-member wards. by the plurality (first past the post) system of election. As a result of the Local Governance (Scotland) Act 2004,[6] eight new wards are to be introduced for the 2007 election, each electing three or four members by the single transferable vote system of election, to produce a form of proportional representation. The total number of councillors will remain the same. A By-Election was held on 12 March 2009 due to the resignation of Councillor Joe Morrow who was a councillor for Labour. The SNP’s Craig Melville took the seat.

Existing wards, listed below, were first used for elections in 1999. The names and parties of current councillors are also listed:[3] 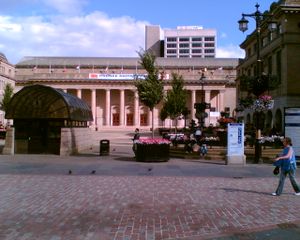 Dundee City Square
Caird Hall is the building at the back of the square
The building on the right is Dundee City Chambers, where the city council meets

The first elections using the new boundaries and using the STV system to vote were held on 3 May 2007. The results were 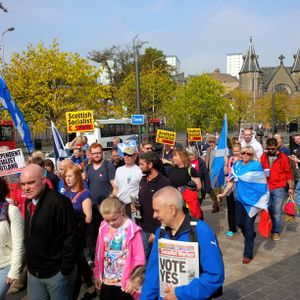 Dundee returned the highest proportion of Yes votes of any area in Scotland in the 2014 independence referendum, with 53,620 Yes votes to 39,880 No votes. It was among only four local authority areas that backed independence. In Summer 2014, First Minister Alex Salmond said Dundee was moving "towards being Scotland's Yes city",[11] and it retained that designation in the run-up to the referendum.[12] Housing schemes in Dundee canvassed by Yes activists indicated levels of support of up to 80 per cent in favour of independence.[13]

Headlines were made in the final week of the campaign when a Better Together event in Dundee was crashed by a demonstration involving Yes activists and members of the Scottish Socialist Party, who marched from the event they were having in Albert Square to sing protest songs at Labour party representatives.[14]

Both constituencies are within the North East Scotland electoral region. The region elects a total of tenfirst past the post constituency Members of the Scottish Parliament (MSPs) and seven additional members, to produce a form of proportional representation for the region as a whole.

Boundaries date from 1999, when the parliament itself was created.

Parliament of the United Kingdom

Current boundaries date from 2005. Prior to the 2005 general election, the constituencies had the boundaries of now existing Scottish Parliament constituencies, with north-eastern and north-western portions of the city area being covered by the Angus (Westminster) constituency.

East and West single-member constituencies have existed, with varying boundaries, since 1950.