Lebanon is a parliamentary democratic republic within the overall framework of confessionalism, a form of consociationalism in which the highest offices are proportionately reserved for representatives from certain religious communities. The constitution grants the people the right to change their government. However, from the mid-1970s until the parliamentary elections in 1992, civil war precluded the exercise of political rights. According to the constitution, direct elections must be held for the parliament every 4 years. The last parliamentary election was in 2009.[1] The Parliament, in turn, elects a President every 6 years to a single term. The President is not eligible for re-election. The last presidential election was in 2008. The president and parliament choose the Prime Minister. Political parties may be formed; most are based on sectarian interests. 2008 saw a new twist to Lebanese politics when the Doha Agreement set a new trend where the opposition is allowed a veto power in the Lebanese Council of Ministers and confirmed religious Confessionalism in the distribution of political power.

Since the emergence of the post-1943 state and after the destruction of the Ottoman Caliphate, national policy has been determined largely by a relatively restricted group of traditional regional and sectarian leaders. The 1943 National Pact, an unwritten agreement that established the political foundations of modern Lebanon, allocated political power on an essentially confessional system based on the 1932 census. Seats in parliament were divided on a 6-to-5 ratio of Christians to Muslims, until 1990 when the ratio changed to half and half. Positions in the government bureaucracy are allocated on a similar basis. The pact also by custom allocated public offices along religious lines, with the top three positions in the ruling "troika" distributed as follows:

Efforts to alter or abolish the confessional system of allocating power have been at the centre of Lebanese politics for decades. Those religious groups most favoured by the 1943 formula sought to preserve it, while those who saw themselves at a disadvantage sought either to revise it after updating key demographic data or to abolish it entirely. Nonetheless, many of the provisions of the national pact were codified in the 1989 Ta'if Agreement, perpetuating sectarianism as a key element of Lebanese political life.

Although moderated somewhat under Ta'if, the Constitution gives the President a strong and influential position. The President has the authority to promulgate laws passed by the Parliament, to issue supplementary regulations to ensure the execution of laws, and to negotiate and ratify treaties.

The Parliament is elected by adult suffrage (majority age for election is 21)[2] based on a system of majority or "winner-take-all" for the various confessional groups. There has been a recent effort to switch to proportional representation which many argue will provide a more accurate assessment of the size of political groups and allow minorities to be heard. Most deputies do not represent political parties as they are known in the West, and rarely form Western-style groups in the assembly. Political blocs are usually based on confessional and local interests or on personal/family allegiance rather than on political affinities.

The parliament traditionally has played a significant role in financial affairs, since it has the responsibility for levying taxes and passing the budget. It also exercises political control over the cabinet through formal questioning of ministers on policy issues and by requesting a confidence debate.

Lebanon's judicial system is based on the Napoleonic Code. Juries are not used in trials. The Lebanese court system has three levels—courts of first instance, courts of appeal, and the court of cassation. There also is a system of religious courts having jurisdiction over personal status matters within their own communities, e.g., rules on such matters as marriage, divorce, and inheritance.

Lebanese political institutions often play a secondary role to highly confessionalized personality-based politics. Powerful families also still play an independent role in mobilizing votes for both local and parliamentary elections. Nonetheless, a lively panoply of domestic political parties, some even predating independence, exists. The largest are all confessional based. The Free Patriotic Movement, The Kataeb Party, also known as the Phalange Party, the National Bloc, National Liberal Party, Lebanese Forces and the Guardians of the Cedars (now outlawed) each have their own base among Christians. Amal and Hezbollah are the main rivals for the organized Shi'a vote, and the PSP (Progressive Socialist Party) is the leading Druze party. While Shi'a and Druze parties command fierce loyalty to their leaderships, there is more factional infighting among many of the Christian parties. Sunni parties have not been the standard vehicle for launching political candidates, and tend to focus across Lebanon's borders on issues that are important to the community at large. Lebanon's Sunni parties include Hizb ut-Tahrir, Future Movement, Independent Nasserist Organization (INO), the Al-Tawhid, and Ahbash. In addition to domestic parties, there are branches of pan-Arab secular parties (Ba'ath parties, socialist and communist parties) that were active in the 1960s and throughout the period of civil war.

There are differences both between and among Muslim and Christian parties regarding the role of religion in state affairs. There is a very high degree of political activism among religious leaders across the sectarian spectrum. The interplay for position and power among the religious, political, and party leaders and groups produces a political tapestry of extraordinary complexity.

In the past, the system worked to produce a viable democracy. Events over the last decade and long-term demographic trends, however, have upset the delicate Muslim-Christian-Druze balance and resulted in greater segregation across the social spectrum. Whether in political parties, places of residence, schools, media outlets, even workplaces, there is a lack of regular interaction across sectarian lines to facilitate the exchange of views and promote understanding. All factions have called for a reform of the political system.

Some Christians favor political and administrative decentralization of the government, with separate Muslim and Christian sectors operating within the framework of a confederation. Muslims, for the most part, prefer a unified, central government with an enhanced share of power commensurate with their larger share of the population. The reforms of the Ta'if agreement moved in this direction but have not been fully realized.

Palestinian refugees, predominantly Sunni Muslims, whose numbers are estimated at between 160,000-225,000, are not active on the domestic political scene.

On September 3, 2004, the Lebanese Parliament voted 96-29 to amend the constitution to extend President Émile Lahoud's six-year term (which was about to expire) by another three years. The move was supported by Syria, which maintained a large military presence in Lebanon.

Following the withdrawal of Syrian troops in April 2005, Lebanon held parliamentary elections in four rounds, from 29 May to 19 June. The elections, the first for 33 years without the presence of Syrian military forces, were won by the Quadripartite alliance, which was part the Rafik Hariri Martyr List, a coalition of several parties and organizations newly opposed to Syrian domination of Lebanese politics.

In January 2015, the Economist Intelligence Unit, released a report stating that Lebanon ranked the 2nd in Middle East and 98th out of 167 countries worldwide for Democracy Index 2014, the report, which ranks countries according to election processes, pluralism, government functions, political participation, political cultures and fundamental freedoms.

This confessional system is based on 1932 census data which showed the Maronite Christians as having a substantial majority of the population. The Government of Lebanon continues to refuse to undertake a new census. 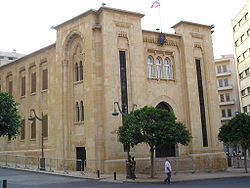 Lebanon's national legislature is called the Assembly of Representatives (Majlis al-Nuwab in Arabic). Since the elections of 1992 (the first since the reforms of the Taif Agreement of 1989 removed the built-in majority previously enjoyed by Christians and distributed the seats equally between Christians and Muslims), the Parliament has had 128 seats. The term was four years, but has recently been extended to five.

Seats in the Parliament are confessionally distributed but elected by universal suffrage. Each religious community has an allotted number of seats in the Parliament. They do not represent only their co-religionists, however; all candidates in a particular constituency, regardless of religious affiliation, must receive a plurality of the total vote, which includes followers of all confessions. The system was designed to minimize inter-sectarian competition and maximize cross-confessional cooperation: candidates are opposed only by co-religionists, but must seek support from outside of their own faith in order to be elected.

The opposition Qornet Shehwan Gathering, a group opposed to the former pro-Syrian government, has claimed that constituency boundaries have been drawn so as to allow many Shi'a Muslims to be elected from Shi'a-majority constituencies (where the Hezbollah Party is strong), while allocating many Christian members to Muslim-majority constituencies, forcing Christian politicians to represent Muslim interests. (Similar charges, but in reverse, were made against the Chamoun administration in the 1950s).

The following table sets out the confessional allocation of seats in the Parliament before and after the Taif Agreement.

Lebanon has numerous political parties, but they play a much less significant role in Lebanese politics than they do in most parliamentary democracies. Many of the "parties" are simply lists of candidates endorsed by a prominent national or local figure. Loose coalitions, usually organized locally, are formed for electoral purposes by negotiation among clan leaders and candidates representing various religious communities; such coalitions usually exist only for the election, and rarely form a cohesive block in the Parliament after the election. No single party has ever won more than 12.5 percent of the seats in the Parliament, and no coalition of parties has won more than 35 percent.

Especially outside of the major cities, elections tend to focus more on local than national issues, and it is not unusual for a party to join an electoral ticket in one constituency while aligned with a rival party - even an ideologically opposite party - in another constituency.

The judicial branch is of:

Lebanon in the news