Politics of Mongolia takes place in a framework of a semi-presidential representative democratic republic, and of a multi-party system.[1][2] Executive power is exercised by the President of the Republic and the Government. Legislative power is vested in both the government and parliament. The Judiciary is independent of the executive and the legislature.

From shortly after the Mongolian Revolution of 1921 until 1990, the Mongolian Government was modeled on the Soviet system; only the communist party—the Mongolian People's Revolutionary Party (MPRP)—was officially permitted to function. After some instability during the first two decades of communist rule in Mongolia, there was no significant popular unrest until December 1989. Collectivization livestock, introduction of agriculture, and the extension of fixed abodes were all carried out without perceptible popular opposition.

The birth of perestroika in the former Soviet Union and the democracy movement in Eastern Europe were mirrored in Mongolia. On the morning of 10 December 1989, the first open pro-democracy demonstration met in front of the Youth Cultural Center in Ulaanbaatar.[3] There, Tsakhiagiin Elbegdorj announced the creation of the Mongolian Democratic Union.[4] Over the next months activists 13 democratic leaders continued to organize demonstrations, rallies, protests and hunger strikes, as well as teachers' and workers' strikes.[5] Activists had growing support from Mongolians, both in the capital and the countryside and the union's activities led to other calls for democracy all over the country.[6][7][8] After extended demonstrations of many thousands of people in subzero weather in the capital city as well as provincial centers, Mongolian People's Revolutionary Party(MPRP) (present Mongolian People's Party)'s Politburo – the authority of the government eventually gave way to the pressure and entered negotiations with the leaders of the democratic movement.[9] Jambyn Batmönkh, chairman of Politburo of MPRP's Central Committee decided to dissolve the Politburo and to resign on 9 March 1990.[10][11] Thus paved the way for the first multi-party elections in Mongolia.[5] Tsakhiagiin Elbegdorj announced this news to the hunger strikers and the people those gathered on Sükhbaatar Square at 10PM on that day after the negotiations between leaders of MPRP and Mongolian Democratic Union.[12] As a result, Mongolia became the first successful country in Asia to transition into democracy from communist rule.[13] Elbegdorj worked as the Leader of the Mongolian Democratic Union in 1989–1997.[14]

As a result of the democratic movement that led to 1990 Democratic Revolution in Mongolia, in May 1990 the constitution was amended, deleting reference to the MPRP's role as the guiding force in the country, legalizing opposition parties, creating a standing legislative body, and establishing the office of president.

Mongolia's first multi-party elections for a People's Great Hural (parliament) were held on 29 July 1990. The MPRP won 85% of the seats. The People's Great Hural first met on 3 September and elected a president (MPRP), vice-president (SDP, Social Democratic Party), prime minister (MPRP), and 50 members to the Baga Hural (small parliament). The vice president was also a chairman of the Baga Hural. In November 1991, the People's Great Hural began discussion on a new constitution and adopted it on 13 January 1992. The Constitution entered into force on 12 February 1992. In addition to establishing Mongolia as an independent, sovereign republic and guaranteeing a number of rights and freedoms, the new constitution restructured the legislative branch of government, creating a unicameral legislature, the State Great Hural (SGH) (parliament).

The 1992 constitution provided that the president would be elected by popular vote rather than by the legislature as before. In June 1993, incumbent Punsalmaagiin Ochirbat won the first popular presidential election running as the candidate of the democratic opposition. 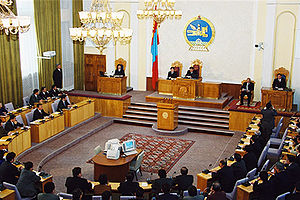 As the supreme government organ, the SGH is empowered to enact and amend laws, determine domestic and foreign policy, ratify international agreements, and declare a state of emergency. The SGH meets semi-annually. There are 76 members of the parliament. They were popularly elected by district in 1992-2012. By 2012 legislative election law, since 2012 parliamentary election, a parallel voting system began to be used in legislature in Mongolia. 48 of the parliamentary members are popularly elected by district and 28 of them are elected from nationwide lists using proportional representation.[15] SGH members elect a speaker and vice speakers from each party or coalition in the government and they serve 4-year term.

Until June 1996 the predominant party in Mongolia was the ex-communist party Mongolian People's Revolutionary Party (MPRP). The country's president was Punsalmaagiin Ochirbat (Democratic Party) in 1990-1997. Ochirbat was a member of MPRP until 1990 but changed his party membership to Democratic Party following the democratic revolution.

As a result of 2000 parliamentary elections MPRP was back in power in the parliament and the government as well as the presidency.

The vote in the 2004 parliamentary elections was evenly split between the two major political forces – Motherland-Democratic Coalition of Democratic Party and Motherland Party and the MPRP.[21] Thus it required the establishing of the first ever coalition government in Mongolia between the democratic coalition and the MPRP. On 20 August 2004, Elbegdorj became the Prime Minister of Mongolia for the second time leading a grand coalition government.[22]

In 2005 Mongolian presidential election Nambaryn Enkhbayar (MPRP) was elected as the country's President.

On 24 May 2009, in 2009 Mongolian presidential election, Democratic Party candidate Tsakhiagiin Elbegdorj made a victory over incumbent President Nambaryn Enkhbayar.[23] Tsakhiagiin Elbegdorj was sworn into office and became the country's president on 18 June 2009.[24] Elbegdorj is Mongolia's first president to never have been a member of the former communist Mongolian People's Revolutionary Party and the first to obtain a Western education.[25]

Incumbent President Tsakhiagiin Elbegdorj, candidate of Democratic Party won the 2013 Mongolian presidential election on 26 June 2013[28] and was sworn into office for his second term as President of Mongolia on 10 July 2013.[29] Thus since 2012 Democratic Party has been in power holding the presidency, and the parliament and the government.

The presidential candidates are usually nominated by parties those have seats in the State Great Hural and from these candidates the president is elected by popular vote for a four-year term.[citation needed] The president is the Head of State, Commander-in-Chief of the Armed Forces, and Head of the National Security Council. He is popularly elected by a national majority for a 4-year term and limited to two terms. The constitution empowers the president to propose a prime minister, call for the government's dissolution, initiate legislation, veto all or parts of a legislation (the State Great Khural can override the veto with a two-thirds majority),[1][2] and issue decrees, decrees giving directives become effective with the prime minister's signature. In the absence, incapacity, or resignation of the president, the SGH chairman exercises presidential power until inauguration of a newly elected president.

The State Great Hural (Ulsyn Ikh Hural in Mongolian) (the Parliament) is unicameral with 76 seats, which are allocated using the mixed-member proportional representation. 48 of the parliamentary members are popularly elected by district and 28 of them are appointed by the political parties by proportional representation. SGH members elect a speaker and vice speakers from each party or coalition in the government and they serve four-year term.

Specialized civil, criminal, and administrative courts exist at all levels and are not subject to Supreme Court supervision. Local authorities—district and city governors—ensure that these courts abide by presidential decrees and SGH decisions. At the apex of the judicial system is the Constitutional Court of Mongolia, which consists of nine members, including a chairman, appointed for six-year term, whose jurisdiction extends solely over the interpretation of the constitution.