From Infogalactic: the planetary knowledge core
(Redirected from Politics of Nagorno-Karabakh)
Jump to: navigation, search

Politics of Nagorno Karabakh takes place in a framework of a presidential representative democratic republic of Nagorno-Karabakh, whereby the President of Nagorno Karabakh is both head of state and head of government, and of a multi-party system; as of 2009, American organization Freedom House ranks Nagorno-Karabakh Republic above both the republic of Armenia and Azerbaijan in terms of political and civil rights.[1][2][3] Executive power is exercised by the government. Legislative power is vested in both the government and the National Assembly. The republic is de facto independent and de jure a part of Azerbaijan. None of the elections are recognized by any governing body and are condemned by Minks Group Observant as well Azerbaijan, Turkey and OIC countries have more harsh stance by saying that the elections delude the peace talks. [4][5][6]

The president is elected for a five-year term by the people.

The National Assembly (Azgayin Zhoghov) has 33 members, 16 elected for a five-year term in single seat constituencies and 17 by proportional representation. Nagorno Karabakh has a multi-party system, with numerous parties in which no one party often has a chance of gaining power alone, and parties must work with each other to form coalition governments. 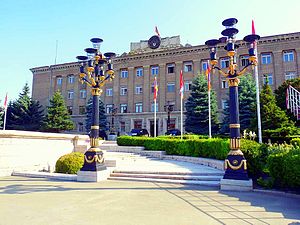