Pennsylvania, like neighboring New Jersey, has swung from being a Republican-leaning state during much of the 20th century to a more competitive state in national presidential elections. Pennsylvania has backed the Democratic presidential candidate in every election since 1992. In 2008 Obama won almost all of the Philadelphia suburbs. Statewide, John McCain won almost three times as many counties (48) as Barack Obama (19) but Obama won the most populous counties therefore winning the popular vote for the state and its 21 electoral votes. 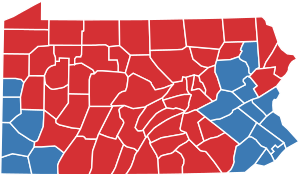 Philadelphia is the Democratic stronghold of the state, often delivering huge margins for the Democrats in statewide elections. Other urban areas, such as Pittsburgh, lean Democratic as well. Like most states, Pennsylvania's rural areas tend to be more conservative and support Republicans. The resulting political map of Pennsylvania is therefore a red "T" in the center of the state with the Pittsburgh and Philadelphia areas a strong blue. The true swing areas of the state are the suburbs of the large cities, notably Philadelphia, which change year to year. The reason for this is the relatively moderate social and fiscal positions held by the citizens of the suburbs.

It has been said that the ideal Pennsylvania candidate is a gun-supporting, pro-life, dynastic Democrat, similar to current senator Bob Casey. Pennsylvania’s former Senator, Arlen Specter, announced in April 2009 that he was switching his party affiliation from Republican to Democratic, citing the Republicans shift to the right since he was elected in 1980, though others suspected he switched because he would face a tough Republican primary election in 2010.[1] As it turns out, he ended up losing the Democratic primary to Representative Joe Sestak. Congressman Sestak narrowly lost the general election to Pat Toomey in November 2010 returning the Senate seat to Republicans.

On the state level, Pennsylvania has been a traditionally liberal Republican state, with a dominant state Republican Party that is much more oriented towards social spending than more conservative state Republican Parties in other regions of the United States. However, the recent Democratic trend in Pennsylvania has affected state politics, and the Democrats controlled the governor's mansion for two terms under Governor Ed Rendell. After losing the governorship for four years under Tom Corbett from 2011 to 2015, Democratic Governor Tom Wolf defeated Corbett's re-election bid in 2014.

During the Tom Ridge administration, the Commonwealth of Pennsylvania maintained a permanent in-house lobbying office in Washington, DC, to lobby the federal government of the United States.[2] During the Ed Rendell administration, the Commonwealth closed that office and entered into a $720,000 annual contract with Blank Rome to lobby the federal government.[2] The Rendell administration says that the contract with Blank Rome was $140,000 less per year than maintaining a permanent state office in Washington.[2]