Politics of Poland takes place in the framework of a representative democracy, whereby the Prime Minister is the head of government of a multi-party system and the President is the head of state.

Executive power is exercised by the President and the Government, which consists of a council of ministers led by the Prime Minister. Its members are typically chosen from a majority coalition in the lower house of parliament (the Sejm), although exceptions to this rule are not uncommon. The government is formally announced by the president, and must pass a motion of confidence in the Sejm within two weeks.

Legislative power is vested in the two chambers of parliament, Sejm and Senate. Members of Sejm are elected by proportional representation, with the proviso that non-ethnic-minority parties must gain at least 5% of the national vote to enter the lower house. Currently four parties are represented. Parliamentary elections occur at least every four years.

The president, as the head of state, is the supreme commander of the Armed Forces, has the power to veto legislation passed by parliament, which can be overridden by a majority of three fifths, and can dissolve the parliament under certain conditions; presidential elections occur every 5 years, if none of the candidates receives the most votes on the first round, a runoff election will be held with the two most voted candidates.

The political system is defined in the Polish Constitution, which also guarantees a wide range of individual freedoms. The judicial branch plays a minor role in politics, apart from the Constitutional Tribunal, which can annul laws that violate the freedoms guaranteed in the constitution.

The President may, regarding particular matters, convene the Cabinet Council, although it does not possess the competence of the Council of Ministers. Official acts of the President shall require, for their validity, the signature of the Prime Minister, nevertheless this does not apply to: 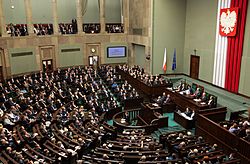 The Polish Parliament has two chambers. The lower chamber (Sejm) has 460 members, elected for a four-year term by proportional representation in multi-seat constituencies using the d'Hondt method similar to that used in many parliamentary political systems, with a 5% threshold (8% for coalitions, threshold waived for national minorities). The Senate (Senat) has 100 members elected for a four-year term under the single member, one-round first-past-the-post voting method. When sitting in joint session, members of the Sejm and Senate form the National Assembly, (Polish Zgromadzenie Narodowe). The National Assembly is formed on three occasions: Taking the oath of office by a new president, bringing an indictment against the President of the Republic to the Tribunal of State, and declaration of a President's permanent incapacity to exercise their duties due to the state of their health. Only the first kind has occurred to date. Since 1991 elections are supervised by the National Electoral Commission (Państwowa Komisja Wyborcza), whose administrative division is called the National Electoral Office (Krajowe Biuro Wyborcze).

Poland's top national security goal is to further integrate with NATO and other west European defense, economic, and political institutions via a modernization and reorganization of its military. Polish military doctrine reflects the same defense nature as its NATO partners.

The combined[2] consists of 100,300[3] active duty personnel and in addition 234,000 reserves. In 2009 the Armed Forces transformed into a fully professional organization and compulsory military service was abolished. Personnel levels and organization in the different branches are as follows (2004):

The Polish military continues to restructure and to modernize its equipment. The Polish Defense Ministry General Staff and the Land Forces staff have recently reorganized the latter into a NATO-compatible J/G-1 through J/G-6 structure. Budget constraints hamper such priority defense acquisitions as a multi-role fighter, improved communications systems, and an attack helicopter.

Poland continues to be a regional leader in support and participation in the NATO Partnership for Peace Program and has actively engaged most of its neighbors and other regional actors to build stable foundations for future European security arrangements. Poland continues its long record of strong support for United Nations peacekeeping operations; it maintaining a unit in Southern Lebanon (part of the United Nations Interim Force in Lebanon, a battalion in NATO's Kosovo Force (KFOR), and providing and actually deploying the KFOR strategic reserve to Kosovo. Poland is a strong ally of the US in Europe and leads the Multinational Division Central-South in Iraq.

The Government Protection Bureau (Polish: Biuro Ochrony Rządu, BOR) is Poland's equivalent of the Secret Service in the United States- providing antiterrorism and VIP security detail services for the government.[4]