Polk County is a county located in the southeastern corner of the U.S. state of Tennessee. As of the 2010 census, the population was 16,825.[2] Its county seat is Benton.[3] The county was created November 28, 1839 from parts of Bradley and McMinn counties. The county was named after then-governor (and future president) James K. Polk.

Much of the terrain of eastern Polk County is mountainous, including Big Frog Mountain, constituting part of the southern Appalachian Mountains. Large tracts of Polk County are part of the Cherokee National Forest. The Ocoee River, site of whitewater slalom events in the Atlanta 1996 Summer Olympic Games, runs through Polk County and is vital to one of the county's major industries, whitewater rafting. The calmer Hiwassee River, a tributary of the Tennessee River which flows through northern Polk County, is also used for rafting and tubing. 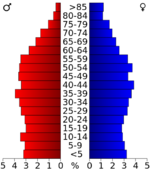 Polk County is home to two high schools, Copper Basin and Polk County. Polk County High School holds one of the most active FFA Chapters in the State. Additionally, the school has won multiple national titles, such as the Future Business Leaders of America Web Development championship.

View from the Ocoee Scenic Byway