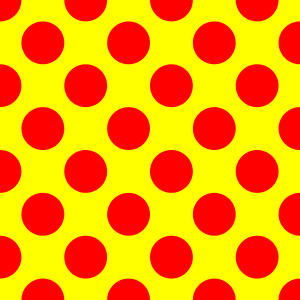 Polka dot is a pattern consisting of an array of filled, large in size,circles. Early instances were generally equally sized and spaced relatively closely in relation to their diameters. Many modern prints include more randomly spaced, sized and coloured dots. Polka dots are most commonly seen on children's clothing, toys, and furniture, but they appear in a wide array of contexts. The pattern rarely appears in formal contexts, however, and is generally confined to more playful attire such as bathing suits and lingerie. Occasionally, white-on-black small dots appear on more formal clothing.

Polka dots became common on clothing in the late nineteenth century in the United Kingdom.

The pattern shares its name with the dance form, making one suspect there is a connection linking the pattern to the dance. However, the name was likely settled upon merely because of the dance's popularity at the time the pattern became fashionable, just as many other products and fashions of the era also adopted the polka name.[1] 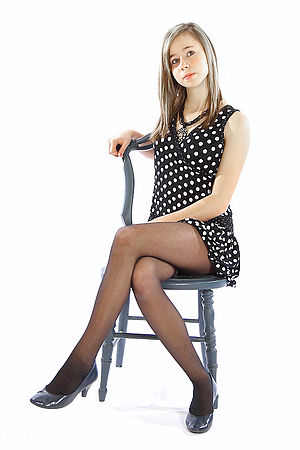 Traditionally polka dots are used in the clothing of flamenco dancers and performers. Frédéric Bazille's 1867 painting Family Reunion depicts two women in blue polka dot dresses. In 1962, DC Comics introduced Polka-Dot Man with irregularly-sized and differently coloured dots. In 1965, Bob Dylan wore a large print green polka dot shirt in the photo on the cover of his single Just like tom thumb's blues. Musician Randy Rhoads used a Flying V guitar with polka dots. Professional wrestler Dusty Rhodes was given a black outfit covered in yellow polka dots during his time in the WWF. This seemed strange at the time but went on to become a successful and memorable gimmick. Blues guitarist Buddy Guy regularly plays a signature Fender Stratocaster painted in black with cream polka dots. Some people associate polka dots with Venezuelan fashion designer Carolina Herrera, who used polka dots on most of her dresses during the late 80s and early 90s, as well as on the boxes of perfume Carolina Herrera, Herrera For Men, Aquaflore and Flore. In the Tour de France, the leader in the mountains competition wears a distinctive polka dot jersey (French: maillot à pois rouge). Although the King of the Mountains was first recognised in the 1933 Tour de France, the distinctive jersey was not introduced until 1975. Much of the Japanese artist's Yayoi Kusama's work features a polka dot motif.[2][3] Unusually, the world's first crack pipe vending machines are polka dotted.[4]

There were many other "polka" items, some of which include "polka-hats" and "polka-jackets." Most disappeared with the fad of the actual polka dance. Only the polka dot fabric pattern remained popular, and the name has been left intact over the years.

The polka dot also appears in popular music. "Itsy Bitsy Teenie Weenie Yellow Polka Dot Bikini" is a novelty song telling the story of a shy girl in a very revealing bathing suit who stays immersed in the ocean water to hide from view. It was written by Paul Vance and Lee Pockriss and first released in June 1960 by Brian Hyland. Before that however, "Polka Dots and Moonbeams" was a popular song with music by Jimmy Van Heusen and lyrics by Johnny Burke, published in 1940. It was Frank Sinatra's first hit recorded with the Tommy Dorsey Orchestra. The song is one of the top 100 most-frequently recorded jazz standards with arrangements by Gil Evans and others and notable recordings by Lester Young, Sarah Vaughn and many others.