From Infogalactic: the planetary knowledge core
(Redirected from Polski słownik biograficzny)
Jump to: navigation, search
This article is about a multi-volume Polish-language biographical dictionary. For a one-volume English-language Polish-biography dictionary, see The Polish Biographical Dictionary. 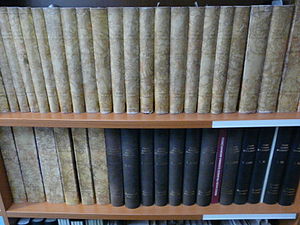 PSB in the Silesian library

Polski Słownik Biograficzny (PSB; Polish Biographical Dictionary) is a Polish-language biographical dictionary, comprising an alphabetically arranged compilation of authoritative biographies of some 25,000 notable Poles and of foreigners who have been active in Poland – famous as well as less well known persons, from Popiel, Piast Kołodziej and Mieszko I, at the dawn of Polish history, to persons who died in the year 2000. The Dictionary, published incrementally since 1935, is a work in progress. It currently covers entries from A to S and its completion is expected about 2030.

The PSB is, by its own assessment, "at present... one of the world's leading biographical publications."[1] Outside Poland, it is available at the British Library, the Library of Congress, the Vatican Library, the Hoover Institution on War, Revolution and Peace, the University of California at Berkeley, Stanford University, the Getty Museum, and many other national and major research libraries.[2]

As of August 2014, 48 volumes have been produced, with entries to "Sz". The latest installment, fascicle 200, the third of volume 49, covers entries "Szumański, Mieczysław – Szwencki, Fryderyk".

The Dictionary's current 47 volumes (well into "S") range in length from 480 to 830 pages, for a total of over 28,000. Some 8,000 individuals have contributed to the Dictionary. Most of its contents are available only in paper form.

Though not a comprehensive source on all notable Poles, the Dictionary is substantial and well-respected. Brock et al. write that the "'Polish Biographical Dictionary' is one of the major achievements of the humanities in 20th-century Poland. The entries reflect the multicultural and multiethnic composition of the pre-partition Polish state [...]. Therefore the dictionary is not 'a biographical dictionary of Poles,' but rather 'a Polish biographical dictionary,' including entries on prominent foreigners who lived in the country as well as representatives of national minorities."[3]

While prewar Polish governments had little influence on Dictionary editorial policies, the postwar communist government of the People's Republic of Poland interfered substantially regarding who should be included.[4] Since Poland's 1989 break with the Soviet bloc, this bias has been partly corrected in several supplements.

Polski słownik biograficzny constitutes a unique mosaic that depicts the full sweep of Polish history through biographies of many of the country's most notable sons and daughters.

This reference work has been published in Kraków since 1935, although publication was suspended during Poland's World War II occupation by Nazi Germany and during the Stalinist period. The Dictionary is a joint publication of the Polish Academy of Sciences (Polska Akademia Nauk) and the Polish Academy of Learning (Polska Akademia Umiejętności). It is edited at the Tadeusz Manteuffel Historical Institute (Instytut Historii im. Tadeusza Manteuffla) and is sponsored by the Foundation for Polish Learning (Fundacja na Rzecz Nauki Polskiej) and the Ministry of Culture and National Heritage (Ministerstwo Kultury i Dziedzictwa Narodowego).

The Dictionary had been founded by Władysław Konopczyński. The first volume appeared in 1935, and four more (through "Dąbrowski, Ignacy") before World War II. After the war, by 1949, when Konopczyński was forced by the communist government to resign his editorship, two more volumes had been published (through "Firlej, Henryk"). The project was then frozen until 1958, when it was revived under Kazimierz Lepszy. In 1964, after the Dictionary had grown by an additional three volumes (through "Jarosiński, Paweł"), Lepszy yielded to Emanuel Rostworowski.

During Rostworowski's tenure as editor, the quality of the biographies increased, while government interference and censorship decreased. Twenty-two further volumes had been published (through "Różycki, Ignacy") when Rostworowski in 1989 passed the baton to Henryk Markiewicz. Under Markiewicz, nine further volumes were published (through Stanisław August Poniatowski), as well as a supplement of Uzupełnienia i sprostowania do tomów I-XL (Additions and Corrections to Volumes I-XL) rectifying communist-era bias and censorship. Since 2003, the Dictionary's editor has been Andrzej Romanowski. The PSB team estimates they will end their work around 2030, with expected 62 tomes.

In 2003, PSB has launched its official Internet homepage. In 2010, the project has been unanimously endorsed by the Polish parliament (Sejm), and given its honorary patronage.