Polykleitos was an ancient Greek sculptor in bronze of the 5th century BCE. His Greek name was traditionally Latinized Polycletus, but is also transliterated Polycleitus; (Ancient Greek: Πολύκλειτος, "much-renowned") and due to iotacism in the transition from Ancient to Modern Greek, Polyklitos or Polyclitus. He is called Sicyonius (lit. "The Sicyonian", usually translated as "of Sicyon") [1] by Latin authors including Pliny the Elder and Cicero, and Aργείος (lit. "The Argive", trans. "of Argos") by others like Plato and Pausanias. He is sometimes called the Elder, in cases where it is necessary to distinguish him from his son, a major architect but minor sculptor.

Alongside the Athenian sculptors Pheidias, Myron and Praxiteles, he is considered one of the most important sculptors of Classical antiquity. The 4th century BCE catalogue attributed to Xenocrates (the "Xenocratic catalogue"), which was Pliny's guide in matters of art, ranked him between Pheidias and Myron.[2]

As noted above, Polykleitos is called "The Sicyonian" by some authors, all writing in Latin, and who modern scholars view as relying on an error of Pliny the Elder in conflating another more minor sculptor from Sikyon, a disciple of Phidias, with Polykleitos of Argos. Pausanias is adamant that they were not the same person, and that Polykleitos was from Argos, in which city state he must have received his early training,[3] and a contemporary of Phidias (possibly also taught by Ageladas).

Polykleitos' figure of an Amazon for Ephesus was admired, while his colossal gold and ivory statue of Hera which stood in her temple—the Heraion of Argos—was favourably compared with the Olympian Zeus by Pheidias. He also sculpted a famous bronze male nude known as the Doryphoros ("Spear-carrier"), which survives in the form of numerous Roman marble copies. Further sculptures attributed to Polykleitos are the Discophoros ("Discus-bearer"), Diadumenos ("Youth tying a headband")[4] and a Hermes at one time placed, according to Pliny, in Lysimachia (Thrace). Polykleitos' Astragalizontes ("Boys Playing at Knuckle-bones") was claimed by the Emperor Titus and set in a place of honour in his atrium.[5] Pliny also mentions that Polykleitos was one of the five major sculptors who competed in the fifth century B.C. to make a wounded Amazon for the temple of Artemis; marble copies associated with the competition survive.[6] 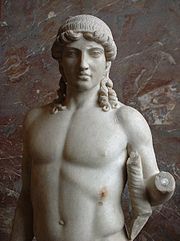 Polykleitos, along with Phidias, created the Classical Greek style. Although none of his original works survive, literary sources identifying Roman marble copies of his work allow reconstructions to be made. Contrapposto was a posture in his statues in which the weight was placed on one leg, and was a source of his fame.

The refined detail of Polykleitos' models for casting executed in clay is revealed in a famous remark repeated in Plutarch's Moralia, that "the work is hardest when the clay is under the fingernail".[7]

Polykleitos consciously created a new approach to sculpture, writing a treatise (Kanon) and designing a male nude (also known as Kanon) exemplifying his aesthetic theories of the mathematical bases of artistic perfection. These expressions motivated Kenneth Clark to place him among "the great puritans of art":[8] Polykleitos' Kanon "got its name because it had a precise commensurability (symmetria) of all the parts to one another"[9] "His general aim was clarity, balance, and completeness; his sole medium of communication the naked body of an athlete, standing poised between movement and repose" Kenneth Clark observed.[10] Though the Kanon was probably represented by his Doryphoros, the original bronze statue has not survived. References to it in other ancient writings, however, imply that its main principle was expressed by the Greek words symmetria, the Hippocratic principle of isonomia ("equilibrium"), and rhythmos. "Perfection, he said, comes about little by little (para mikron) through many numbers".[11] By this Polykleitos meant that a statue should be composed of clearly definable parts, all related to one another through a system of ideal mathematical proportions and balance.

Polykleitos and Phidias were amongst the first generation of Greek sculptors to attract schools of followers. Polykleitos' school lasted for at least three generations, but it seems to have been most active in the late 4th century and early 3rd century BCE. The Roman writers Pliny and Pausanias noted the names of about twenty sculptors in Polykleitos' school, defined by their adherence to his principles of balance and definition. Skopas and Lysippus are among the best-known successors of Polykleitos.

Polykleitos' son, Polykleitos the Younger, worked in the 4th century BCE. Although the son was also a sculptor of athletes, his greatest fame was won as an architect. He designed the great theater at Epidaurus.

The main-belt asteroid 5982 Polykletus is named after Polykleitos.

The statue of Diadumenos, also known as Youth Tying a Headband is one of Polykleitos' sculptures known from many copies. The gesture of the boy tying his headband represents a victory, possibly from an athletic contest. “It is a first-century A.D. Roman copy of a Greek bronze original dated around 430 B.C.”[13] Polykleitos sculpted the outline of his muscles significantly to show that he is an athlete. “The thorax and pelvis of the Diadoumenos tilt in opposite directions, setting up rhythmic contrasts in the torso that create an impression of organic vitality. The position of the feet poised between standing and walking give a sense of potential movement. This rigorously calculated pose, which is found in almost all works attributed to Polykleitos, became a standard formula used in Greco-Roman and, later, western European art.”[14]

Another statue created by Polykleitos is the Doryphoros, also called the Spear bearer. It is a typical Greek sculpture depicting the beauty of the male body. “Polykleitos sought to capture the ideal proportions of the human figure in his statues and developed a set of aesthetic principles governing these proportions that was known as the Canon or ‘Rule.’ ”[15] He created the system based on mathematical ratios. “Though we do not know the exact details of Polykleitos’s formula, the end result, as manifested in the Doryphoros, was the perfect expression of what the Greeks called symmetria.” On this sculpture, it shows somewhat of a contrapposto pose; the body is leaning most on the right leg. “The proportions of the Doryphoros together with the perfect balance between tension and relaxation, create a visual image of harmony.”[16] The Doryphoros has an idealized body, contains less of naturalism. In his left hand, there was once a spear, but if so it has since been lost. It was believed that either the sculpture was a normal civilian, or he could be Achilles going off to war. The posture of the body shows that he is a warrior and a hero.[17]