From Infogalactic: the planetary knowledge core
Jump to: navigation, search
This article is about the musical texture. For other uses, see Polyphony (disambiguation). 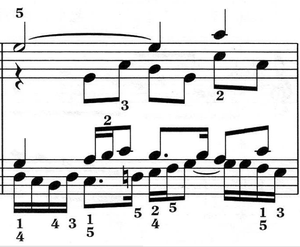 A bar from J.S. Bach's "Fugue No.17 in A flat", BWV 862, from Das Wohltemperierte Clavier (Part I), a famous example of contrapuntal polyphony.

Within the context of the Western musical tradition, the term is usually used to refer to music of the late Middle Ages and Renaissance. Baroque forms such as fugue, which might be called polyphonic, are usually described instead as contrapuntal. Also, as opposed to the species terminology of counterpoint, polyphony was generally either "pitch-against-pitch" / "point-against-point" or "sustained-pitch" in one part with melismas of varying lengths in another.[1] In all cases the conception was probably what Margaret Bent (1999) calls "dyadic counterpoint",[2] with each part being written generally against one other part, with all parts modified if needed in the end. This point-against-point conception is opposed to "successive composition", where voices were written in an order with each new voice fitting into the whole so far constructed, which was previously assumed.

The term polyphony is also sometimes used more broadly, to describe any musical texture that is not monophonic. Such a perspective considers homophony as a sub-type of polyphony.[3]

Although the exact origins of polyphony in the Western church traditions are unknown, the treatises Musica enchiriadis and Scolica enchiriadis, both dating from c. 900, are usually considered the oldest extant written examples of polyphony. These treatises provided examples of two-voice note-against-note embellishments of chants using parallel octaves, fifths, and fourths. Rather than being fixed works, they indicated ways of improvising polyphony during performance. The Winchester Troper, from c. 1000, is the oldest extant example of notated polyphony for chant performance, although the notation does not indicate precise pitch levels or durations.[7]

European polyphony rose out of melismatic organum, the earliest harmonization of the chant. Twelfth-century composers, such as Léonin and Pérotin developed the organum that was introduced centuries earlier, and also added a third and fourth voice to the now homophonic chant. In the thirteenth century, the chant-based tenor was becoming altered, fragmented, and hidden beneath secular tunes, obscuring the sacred texts as composers continued to play with this new invention called polyphony. The lyrics of love poems might be sung above sacred texts in the form of a trope, or the sacred text might be placed within a familiar secular melody. The oldest surviving piece of six-part music is the English rota Sumer is icumen in (c. 1240).[8]

These musical innovations appeared in a greater context of societal change. After the first millennium, European monks decided to start translating the works of Greek philosophers into the vernacular. Western Europeans were aware of Plato, Socrates, and Hippocrates during the Middle Ages. However they had largely lost touch with the content of their surviving works because the use of Greek as a living language was restricted to the lands of the Eastern Roman Empire (Byzantium). Once these ancient works started being translated thus becoming accessible, the philosophies had a great impact on the mind of Western Europe. This sparked a number of innovations in medicine, science, art, and music.

European polyphony rose prior to, and during the period of the Western Schism. Avignon, the seat of the antipopes, was a vigorous center of secular music-making, much of which influenced sacred polyphony.[9]

It was not merely polyphony that offended the medieval ears, but the notion of secular music merging with the sacred and making its way into the papal court. It gave church music more of a jocular performance quality removing the solemn worship they were accustomed to. The use of and attitude toward polyphony varied widely in the Avignon court from the beginning to the end of its religious importance in the fourteenth century. Harmony was not only considered frivolous, impious, and lascivious, but an obstruction to the audibility of the words. Instruments, as well as certain modes, were actually forbidden in the church because of their association with secular music and pagan rites. Dissonant clashes of notes give a creepy feeling that was labeled as evil, fueling their argument against polyphony as being the devil’s music. After banishing polyphony from the Liturgy in 1322, Pope John XXII spoke in his 1324 bull Docta Sanctorum Patrum warning against the unbecoming elements of this musical innovation. [10] Pope Clement VI, however, indulged in it.

The oldest extant polyphonic setting of the mass attributable to one composer is Guillaume de Machaut's Messe de Nostre Dame, dated to 1364, during the pontificate of Pope Urban V.

More recently, the Second Vatican Council (1962–1965) stated: "Gregorian chant, other things being equal, should be given pride of place in liturgical services. But other kinds of sacred music, especially polyphony, are by no means excluded.... Religious singing by the people is to be skillfully fostered, so that in devotions and sacred exercises, as also during liturgical services, the voices of the faithful may ring out”.[11]

English Protestant west gallery music included polyphonic multi-melodic harmony, including fuguing tunes, by the mid-18th century. This tradition passed with emigrants to North America, where it was proliferated in tunebooks, including shape-note books like The Southern Harmony and The Sacred Harp. While this style of singing has largely disappeared from British and American sacred music, it survived in the rural Southern United States, until it again began to grow a following throughout the United States and even in places such as Ireland, the United Kingdom, Poland, Australia and New Zealand, among others. 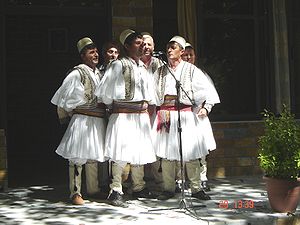 Polyphonic singing in the Balkans is traditional folk singing of this part of southern Europe. It is also called ancient, archaic or old-style singing.[12][13]

Balkan drone music is described as polyphonic due to Balkan musicians using a literal translation of the Greek polyphōnos ('many voices'). In terms of Western classical music, it is not strictly polyphonic, due to the drone parts having no melodic role, and can better be described as multipart.[14]

The polyphonic singing tradition of Epirus is a form of traditional folk polyphony practiced among Aromanians, Albanians, Greeks, and Macedonian Slavs in southern Albania and northwestern Greece.[15][16] This type of folk vocal tradition is also found in the Republic of Macedonia and Bulgaria. Albanian polyphonic singing can be divided into two major stylistic groups as performed by the Tosks and Labs of southern Albania. The drone is performed in two ways: among the Tosks, it is always continuous and sung on the syllable ‘e’, using staggered breathing; while among the Labs, the drone is sometimes sung as a rhythmic tone, performed to the text of the song. It can be differentiated between two-, three- and four-voice polyphony.

The phenomenon of Albanian folk iso-polyphony (Albanian iso-polyphony) has been proclaimed by UNESCO a "Masterpiece of the Oral and Intangible Heritage of Humanity". The term iso refers to the drone, which accompanies the iso-polyphonic singing and is related to the ison of Byzantine church music, where the drone group accompanies the song.[17][18]

Polyphony in the Republic of Georgia is arguably the oldest polyphony in the Christian world. Georgian polyphony is traditionally sung in three parts with strong dissonances, parallel fifths, and a unique tuning system based on perfect fifths. Georgian Polyphonic Singing has been proclaimed by UNESCO an Intangible Cultural Heritage of Humanity.[19] See Music of Georgia (country)#Traditional vocal polyphony. Polyphony plays a crucial role in Abkhazian traditional music. Polyphony is present in all genres where the social environment provides more than one singer to support the melodic line. Readers might remember (from the very beginning of this book) the recollection of I. Zemtsovsky, when a dozing Abkhazian started singing a drone to support an unknown to him singer. Abkhazian two and three-part polyphony is based on a drone (sometimes a double drone). Two part drone songs are considered by Abkhazian and Georgian scholars the most important indigenous style of Abkhazian polyphony. Two-part drone songs are dominating in Gudauta district, the core region of ethnic Abkhazians. Millennia of cultural, social and economic interactions between Abkhazians and Georgians on this territory resulted in reciprocal influences, and in particular, creation of a new, so-called “Georgian style” of three-part singing in Abkhazia, unknown among Adighis. This style is based on two leading melodic lines (performed by soloists - akhkizkhuo) singing together with the drone or ostinato base (argizra). Indigenous Abkhazian style of three-part polyphony uses double drones (in fourths, fifths, or octaves) and one leading melodic line at one time. Abkhazians use a very specific cadence: tetrachordal downwards movement, ending on the interval fourth.[6]:55