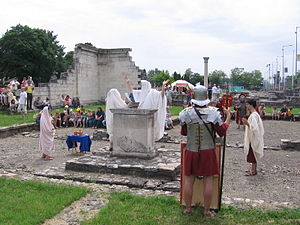 While the emphasis on historical accuracy may imply historical reenactment, the desire for continuity in ritual traditions (orthopraxy) is a common characteristic of religion in general, as seen in Anglican ritualism, or in much Christian liturgy.[1]

D. H. Lawrence put a sketch of a fictional program into the mouth of a character in The Plumed Serpent (published in 1926):

So if I want Mexicans to learn the name of Quetzalcoatl, it is because I want them to speak with the tongues of their own blood. I wish the Teutonic world would once more think in terms of Thor and Wotan, and the tree Igdrasil. And I wish the Druidic world would see, honestly, that in the mistletoe is their mystery, and that they themselves are the Tuatha De Danaan, alive, but submerged. And a new Hermes should come back to the Mediterranean, and a new Ashtaroth to Tunis; and Mithras again to Persia, and Brahma unbroken to India, and the oldest of dragons to China.[2]

The term "Reconstructionist Paganism" was likely coined by Isaac Bonewits in the late 1970s.[3] Bonewits has said that he is not sure whether he "got this use of the term from one or more of the other culturally focused Neopagan movements of the time, or if [he] just applied it in a novel fashion."[3] Margot Adler later used the term "Pagan Reconstructionists" in the 1979 edition of Drawing Down the Moon to refer to those who claimed to adhere to some sort of historical religion. This emphasis on reconstruction is in ostensible contrast to more fanciful approaches to "paganism" in Romanticism, as seen for example in Germanic mysticism.

Linzie (2004) enumerates the difference between modern reconstructionist polytheism, (such as modern Hellenismos), with "classical" paganism as found in Eighteenth to mid Twentieth century movements, (including Germanic mysticism, early Neodruidism and Wicca). Aspects of the former, not found in the latter, are as follows:

The use of the terms "Pagan" and "Neopagan" to apply to polytheistic reconstructionists is controversial.[1] Some reconstructionist, ethnic and indigenous religious groups take great issue with being referred to as "Pagan" or "Neopagan," viewing "Pagan" as a pejorative term used in the past by institutions attempting to destroy their cultures and religions.[5] In addition, reconstructionists may choose to reject the terms "Pagan" and "Neopagan" in order to distance themselves from aspects of popular Neopaganism, such as eclecticism, cultural appropriation, the practice of magic, and a tendency to conduct rituals within a Wiccan-derived format, that they find irrelevant or even inimical to their religious practice.[6]

Even among those reconstructionist groups who see themselves as part of the broader, Pagan or Neopagan spectrum, or who simply see some members of the Pagan community as allies, there is still a refusal to accept or identify with what they see as the more problematic aspects of that community, such as the above-noted eclecticism, cultural appropriation or Wiccan-inspired ritual structures. Many Polytheistic Reconstructionists see Reconstructionism as the older current in the Pagan community, and are unwilling to give up this part of their history simply because eclectic movements are currently more fashionable.[5][7]