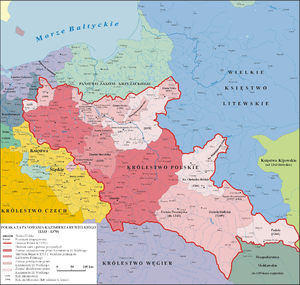 Main articles: Duchy of Pomerania and Pomerania during the Late Middle Ages

After the death of Barnim IV of Pomerania-Wolgast in 1366, an armed conflict arose when Barnim's brother Bogislaw V refused to share his power with Barnim's sons, Wartislaw VI and Bogislaw VI, and his other brother, Wartislaw V, who in turn allied with Mecklenburg to enforce their claims. On May 25, 1368, a compromise was negotiated in Anklam,[5] which was made a formal treaty on June 8, 1372 in Stargard,[6] and resulted in a partition of Pomerania-Wolgast.[7]

Bogislaw V received most of the Farther Pomeranian parts. Excepted was the land of Neustettin, which was to be ruled by his brother Wartislaw V, and was integrated into Bogislaw's part-duchy only after his death in 1390. This eastern partition became known as Pomerania-Stolp.[5][6][7]

Main articles: Duchy of Pomerania and Pomerania during the Late Middle Ages

The situation of the descendants of Bogislaw V, who ruled Pomerania-Stolp, differed somewhat from the situation of their western counterparts. The area was more sparsely settled and dominated by powerful noble families, so not much income could be derived by the dukes. On the other hand, the Stolpian branch of the House of Pomerania had relatives among the royal houses of Denmark and Poland. Casimir IV and Elisabeth, the children of Bogislaw V and his first wife Elisabeth, the daughter of Casimir III of Poland, where both raised at the Polish court in Kraków. Elisabeth would become Holy Roman Empress after her marriage with Charles IV, and Casimir was adopted by and designated heir of his grandfather. Yet, his ambitions were thwarted when Ludwig of Hungary overruled the testament of Casimir of Poland in 1370, Casimir of Pomerania-Stolp only for a short time took the land of Dobrin as a fief.

During the Polish–Teutonic wars, the Pomeranian dukes changed sides between Poland and the knights very frequently.[8] Wartislaw VII and Barnim V allied with the Teutonic Order.[9] In 1390 however, after Jogaila (Władysław Jagiełło) had promised to hand part of the heritage of Casimir IV, Wartislaw VII's stepbrother, over to Wartislaw, the latter concluded an alliance with Poland and received the Polish castellany of Naklo (Nakel) and probably some adjacent areas as a fief in return, declaring himself a vassal of Jagiełło III in Pyzdry.[10][11][12][13][14]

Scholars offer somewhat different interpretations of the treaty of Pyzdry. According to scholars such as Juliusz Bardach, Władysław Czapliński, Fenrych (1961),[15] Marceli Kosman, Tadeusz Ładogórski, Andrzej Nowakowski, Michał Sczaniecki and Kazimierz Ślaski, Wartislaw's oath was for all territory held by him and meant that Pomerania-Stolp itself become a Polish fief.[12][14][16][17] Other descriptions of the treaty included an oath of vassalage of Wartislaw VII to Jagiello without specifying a territory: Gòrski (1947), Labuda (1948),;[15] Mitkowski (1946) and Zientara (1969) wrote the oath was for the territory Waritislaw received as fiefs from Jagiełło (especially Naklo/Nakel); Mielcarz (1976) said the oath was binding only Wartislaw himself, as a person, to Jagiello; and Gumowski (1951) said the document shows Wartislaw giving a general solemn promise of service.[15] Czacharowski (2001) says it was an alliance and refers to Naklo being held as a Polish fief.[18]

With respect to the discourse in Polish historiography, Branig and Buchholz (1997) say that however the treaty is interpreted, it did not have any significance for the future.[14][19] The vassalage was short-lived; Wartislaw's brothers Barnim V and Bogislaw VIII however took on a friendly attitude towards the Teutonic Order, and Naklo returned to the Polish Crown after Wartislaw's death.[8]

Pomerania-Stolp was a crucial point in the knights' land supply route. Bogislaw VIII of Pomerania-Stolp allied with both the Teutonic Knights and Poland, but supported the latter after the war had started in 1409 by blocking his lands for the knights' troops and allowing his nobles to kidnap those who were travelling his lands. For his aid, he was granted the Lauenburg (now Lębork) and Bütow (now Bytów) areas (Lauenburg and Bütow Land) and others, but those were lost in the First Peace of Thorn in 1411.[22]

Eric II of Pomerania-(Wolgast)-Stolp allied with the Polish king Casimir IV in his Thirteen Years' War against the Teutonic Knights. On January 3, 1455, he in turn was granted the Lauenburg and Bütow Land at the Pomerelian frontier. When Lauenburg was retaken by the knights in 1459, the Polish king was upset and ravaged the Stolp area. Eric reconciled with the king on August 21, 1466, and bought the town from the knights on October 11, six days before the Second Peace of Thorn, that was signed by Eric in 1467.[23]

Bogislaw X becomes sole ruler of the duchy of Pomerania (1478)

The extinction of the House of Pomerania-Stettin triggered a conflict about inheritance with the Margraviate of Brandenburg.[26] In the Treaty of Soldin of 1466, a compromise was negotiated: Wartislaw X and Eric II, the dukes of Pomerania, took over Pomerania-Stettin as a Brandenburgian fief. This was disputed already during the same year by the emperor, who intervened against the Brandenburgian overlordship of Pomerania. This led to a series of further warfare and truces, that were ended by the Treaty of Prenzlau of 1472, basically confirming the ruling of the Soldin treaty, but settling on a border north of Gartz (Oder) resembling Brandenburg's recent gains. This treaty was accepted by the emperor.[27]

In 1474, Eric II died of the Black Death, and his son Bogislaw X inherited Pomerania-Stolp. Bogislaw's brothers had died the same year. After the death of his uncle Wartislaw X in 1478, he became the first sole ruler in the Duchy of Pomerania since almost 200 years.[26][28]

Eric II had left Pomerania in tense conflicts with Brandenburg and Mecklenburg. Bogislaw managed to resolve these conflicts by both diplomatic and military means. He married his sister, Sophia, to Magnus II, Duke of Mecklenburg, and his other sister, Magarete, was married to Magnus's brother Balthasar. Bogislaw himself married Magarete, daughter of Brandenburg's Prince-elector Frederick II. Also, in 1478, Bogislaw regained areas lost to Brandenburg by his father, most notably the town of Gartz and other small towns and castles north of the Brandenburgian Uckermark. During the confirmation of the Peace of Prenzlau in 1479, the border was finally settled north of Strasburg and Bogislaw had to take his possessions as a fief from Brandenburg.[26][29]