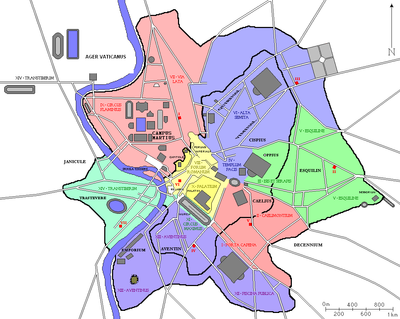 The pomerium or pomoerium was a religious boundary around the city of Rome and cities controlled by Rome. In legal terms, Rome existed only within its pomerium; everything beyond it was simply territory (ager) belonging to Rome.

The term is a classical contraction of the Latin phrase post moerium, literally "behind the wall". The Roman historian Livy writes in his Ab Urbe Condita that, although the etymology implies a meaning referring to a single side of the wall, the pomerium was originally an area of ground on both sides of city walls. He states that it was an Etruscan tradition to consecrate this area by augury and that it was technically unlawful to inhabit or to farm the area of the pomerium, which in part had the purpose of preventing buildings from being erected close to the wall (although he writes that, in his time, houses were in fact built against the wall).[1]

Tradition maintained that the pomerium was the original line ploughed by Romulus around the walls of the original city, and that it was inaugurated by Servius Tullius. The legendary date of its demarcation, 21 April, continued to be celebrated as the anniversary of the city’s founding.[2]

The pomerium did not follow the line of the Servian walls, and remained unchanged until the Dictator Lucius Cornelius Sulla, in a demonstration of his absolute power, expanded it in 80 BC. Several white marker stones (known as cippi) commissioned by Claudius have been found in situ and several have been found away from their original location. These stones mark the boundaries and relative dimensions of the pomerium extension by Claudius. This extension is recorded in Tacitus and outlined by Aulus Gellius.[3] 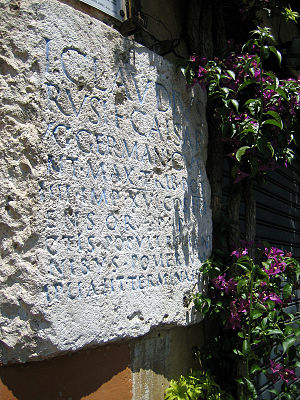 Inscription marking the Claudian pomerium in via del Pellegrino

The pomerium was not a walled area (unlike the Chinese Forbidden City), but rather a legally and religiously defined one marked by cippi. It encompassed neither the entire metropolitan area nor even all the Seven Hills (the Palatine Hill was within the pomerium, but the Capitoline and Aventine Hills were not). The Curia Hostilia and the well of the Comitium in the Forum Romanum, two extremely important locations in the government of the city-state and its empire, were located within the pomerium. The Temple of Bellona was beyond the pomerium.