From Infogalactic: the planetary knowledge core
Jump to: navigation, search
This article is about the Finnish sailing ship. For the German battleship, see SMS Pommern. 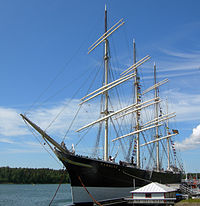 The Pommern, anchored in the western of Mariehamn's two harbours, Västerhamn.

The Pommern (German for Pomerania) is one of the Flying P-Liners, the famous sailing ships of the German shipping company F. Laeisz. Later she was acquired by Gustaf Erikson of Mariehamn in the Finnish Åland archipelago, who used her to carry grain from the Spencer Gulf area in Australia to harbours in England or Ireland until the start of World War II. After World War Two, she was donated to the town of Mariehamn as a museum ship.

She is now a museum ship belonging to the Åland Maritime Museum and is anchored in western Mariehamn, Åland. A collection of photographs taken by Ordinary Seaman Peter Karney in 1933 showing dramatic pictures of life on a sailing ship rounding Cape Horn can be found in the National Maritime Museum at Greenwich.

A 1:35-scale model of the Pommern hangs in Grundtvigs Kirke, in Copenhagen, Denmark, though on being donated to the church in 1939, the model was renamed Dronning Alexandrine in honour of Denmark's then- queen consort.[1]

The Pommern has the reputation of being a "lucky ship". She survived both world wars unscathed, lost only four crew members at sea on her journeys, and she won the Great Grain Races twice, 1930 and 1937. She is one of the most popular landmarks of Åland, and is visited by thousands of visitors annually.

The children in Arthur Ransome's We Didn't Mean To Go To Sea encounter the Pommern as they return to Harwich. The Pommern had unloaded its cargo of Australian grain and was being towed out before setting sail back to Mariehamn in the Baltic.