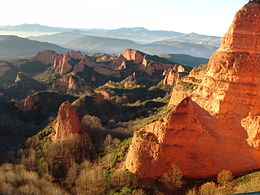 Ponferrada (Spanish pronunciation: [pomfeˈraða], from the Latin Pons Ferrata, Iron Bridge) is the capital city of El Bierzo in the Province of León, Spain. It lies on Sil River and it is completely surrounded by mountains. It is the last major town on the French route of the Camino de Santiago before it reaches Santiago de Compostela. In 2008, it had a population of 69,769.[1]

In pre-Roman times the region was populated by the Astures, a Hispano-Celtic Gallaecian people. They were conquered by Emperor Augustus in the Astur-Cantabrian Wars (29-19 BC) and the area quickly became the largest mining center of the Empire during the Roman period, where gold and other metals and minerals were extracted. Numerous Roman mining sites are still visible in the area, one of the most spectacular being Las Médulas, a UNESCO World Heritage Site since 1997.[2] Romans also imported grapevines, and wine production thrived in the region until the propagation of Phylloxera at the end of the 19th century, which destroyed the majority of the vineyards.

The modern name of the city derives from the iron reinforcements added to the ancient bridge over the river Sil (Latin pons for "bridge" and ferrata for "iron"), commissioned by Bishop Osmundo of Astorga to facilitate the crossing of the Sil River to pilgrims in their way to Santiago de Compostela.

The railroad arrived in Ponferrada in 1881, and during World War I local tungsten deposits were exploited to supply the arms industry. In 1918 the Ponferrada Mining, Iron and Steel Company (Spanish: Minero Siderúrgica de Ponferrada (MSP)) was founded to exploit coal deposits in the region, and it grew to became Spain's largest coal mining corporation. The Spanish National Energy Corporation (Endesa) was founded in 1944 and in 1949 it opened Spain's first coal-fueled power plant in Ponferrada, Compostilla I. In 1960 the Bárcena Dam (Spanish: Pantano de Bárcena) opened and by the second half of the 20th century the economy of the city was mainly based on mining and electricity generation, both hydroelectric and coal-fueled.

Starting in the late 1980s most mines were closed, and after the collapse of the mining industry Ponferrada was for a while in a crisis. However, in the late 1990s the city underwent a major transformation with the establishment in the city of several industrial and services firms, the reintroduction of commercial wine production, the opening of a local branch of the University of León offering several undergraduate degrees, and in general a radical improvement of the town's infrastructure. The economy is now based mainly on tourism, agriculture (fruit and wine), wind power generation and slate mining, with a mild but constant population increase.

Important factors contributing to the recent boom of the tourism industry are the increasing popularity of the Way of St. James (Spanish: Camino de Santiago; a pilgrimage route that goes from France to Santiago de Compostela, Galicia), the designation in 1997 of Las Médulas as a UNESCO World Heritage Site and the development of rural tourism lodging and wineries in the area. The Energy City Foundation Spanish: Fundación Ciudad de la Energía was established in Ponferrada in 2006 and is currently overseeing the construction of the National Energy Museum (Spanish: Museo Nacional de la Energía) in the city, as well as sponsoring several other initiatives that should further boost tourism and the economy of the city and its region.[2][3]

Ponferrada is also noted for its Castillo de los Templarios, a Templar castle which covers approximately 16,000 square meters. In 1178, Ferdinand II of León donated the city to the Templar order for protecting the pilgrims on the Way of St. James who passed through El Bierzo in their road to Santiago de Compostela.

The castle hosted the Knights Templar's Grand Master of Castille. However, the Templars were only able to enjoy the use of their fortress for about twenty years before the order was disbanded and its properties confiscated in 1311. Several noble houses fought over the assets until Alfonso XI allotted them to the Count of Lemos in 1340. Finally the Catholic Monarchs incorporated Ponferrada and its castle into the Crown in 1486. As with many other historical sites in Europe, many of the blocks that at one point formed the walls of the castle were removed and used in local construction projects. Extensive restoration works are ongoing.

The Basilica de la Encina is a church built in the Renaissance style in 1573. Its baroque tower dates from 1614.

The El Bierzo Museum (Spanish: Museo de El Bierzo) offers a tour of the history of the region and hosts several important archeological pieces, while the Museum of Radio (Spanish: Museo de la Radio) offers an interesting tour of the history of the radio in Spain.[4] The National Energy Museum (Spanish: Museo Nacional de la Energía) is currently under construction, sponsored by the Energy City Foundation (Spanish: Fundación Ciudad de la Energía). It will include the restored building and equipment of Compostilla I, Spain's first coal-fueled power plant opened in 1949 in Ponferrada.

The church of Santiago de Peñalba (an example of Mozarabic art), the Hermitage of Santo Tomás de las Ollas (10th century) and the Romanesque Church of Santa María de Vizbayo are also nearby.[5]

The city and its surroundings offer many opportunities for outdoor activities. There are many easily accessible hiking and cycling routes nearby, both on and off-road, including the 330 kilometer long La Mirada Circular which circles the whole El Bierzo valley.[6]

It is possible to visit many wineries in the area to try the local wines and food, or simply visit the vineyards.

During the winter, Temperatures generally vary between 5 and 15 °C (41 and 59 °F) during the day and between -2 and 5 °C (28 and 41 °F) at night. Nights below freezing are very common during this period. Snowfall occurs almost every year with an average of 5 snow days every winter, although heavy snowfalls are uncommon in the city.

Ponferrada hosts its annual festival (Fiestas de La Encina) during the first week of September with many concerts and activities for adults and especially children, and in July it organises a very popular Templar Night in its Templar Castle (participants dress up and recreate town life during the 14th century). The city also organizes music and cinema festivals, and hosts the annual Golden Microphone (Spanish: Premios Micrófono de Oro) award ceremony. 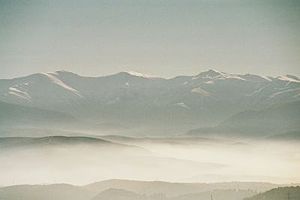 The Aquilianos mountains with El Morredero peak to the left
File:PuentegarcaojedaPonfe.jpg
Templar Castle on the banks of Sil River

Theater productions perform regularly at the local Teatro Bergidum, and there is a local multiplex cinema with seven screens. The city hosts regional (El Bierzo Museum) and radio (Museum of Radio) museums, and the National Energy Museum is currently under construction. Each year the city hosts music and cinema festivals, and hosts the annual Golden Microphone (Spanish: Premios Micrófono de Oro) award ceremony. These prizes are awarded by the Spanish Federation of Radio and Television Associations (Spanish: Federación de Asociaciones de Radio y Televisión) to recognize the outstanding careers of radio professionals in Spain.

The local football team, SD Ponferradina plays in the Spanish 2nd Division. The team had played for most of its history in the 2nd Division B and 3rd Division of the Spanish Football League, however in the 2006-07 season the team was promoted for the first time to the 2nd Division, quite an achievement for a medium-sized city. After only one season it was relegated to the 2nd Division B, but in 2010 the team once again achieved promotion to 2nd Division, where it currently plays. There are many intramural and regional leagues in football and other sports, including basketball, futsal, and athletics. The city's athletics stadium is named after former 800m world champion Colomán Trabado.[9]

There are many hiking routes nearby, including the 330 kilometer long La Mirada Circular, which circles the whole El Bierzo valley. Cycling is also very popular, as the valley provides opportunities to exercise in both flat and inclined terrain, on and off-road.

In September 21, 2011, Ponferrada was appointed to organize the 2014 UCI Road World Championships.

Ponferrada is easily accessible by highway (Autovía A-6) and intercity public transportation is readily available, as several daily ALSA bus services and RENFE passenger trains link the city with major population centers in Spain and the rest of Europe. León Airport is the closest, while airports in Santiago, A Coruña, Asturias, Valladolid and Madrid Barajas provide alternative options for national and international air travel.