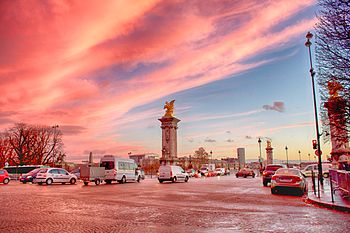 View of the street crossing on the bridge.

The Pont Alexandre III is a deck arch bridge that spans the Seine in Paris. It connects the Champs-Élysées quarter with those of the Invalides and Eiffel Tower. The bridge is widely regarded as the most ornate, extravagant bridge in the city.[2][3] It is classified as a French Monument historique.

Location on the Seine in Paris.

The Beaux-Arts style bridge, with its exuberant Art Nouveau lamps, cherubs, nymphs and winged horses at either end, was built between 1896 and 1900. It is named after Tsar Alexander III, who had concluded the Franco-Russian Alliance in 1892. His son Nicholas II laid the foundation stone in October 1896. The style of the bridge reflects that of the Grand Palais, to which it leads on the right bank.

The construction of the bridge is a marvel of 19th century engineering, consisting of a 6 metres (20 ft) high single span steel arch. The design, by the architects Joseph Cassien-Bernard and Gaston Cousin, was subject to strict controls that prevented the bridge from obscuring the view of the Champs-Élysées or the Invalides.

The bridge was built by the engineers Jean Résal and Amédée d'Alby. It was inaugurated in 1900 for the Exposition Universelle (universal exhibition) World's Fair, as were the nearby Grand Palais and Petit Palais. 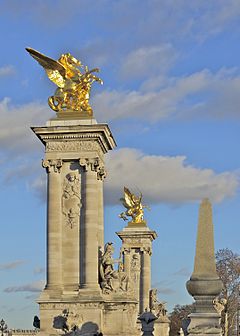 Numerous sculptors provided the sculptures that feature prominently on the bridge.

Four gilt-bronze statues of Fames watch over the bridge, supported on massive 17 metres (56 ft) masonry socles, that provide stabilizing counterweight for the arch, without interfering with monumental views. The socles are crowned by Fames restraining Pegasus. 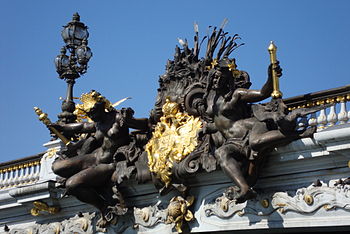 Nymphs of the Neva relief.

The Nymph reliefs are at the centres of the arches over the Seine, memorials to the Franco-Russian Alliance. The "Nymphs of the Seine" has a relief of the arms of France, and faces the "Nymphs of the Neva" with the arms of Imperial Russia. They are both are executed in hammered copper over forms by Georges Récipon.
In the same political spirit, the Trinity Bridge in Saint Petersburg was conceived as a memorial to the Franco-Russian Alliance. It was designed by Gustave Eiffel, and the first stone laid in August 1897 by French president Félix Faure.