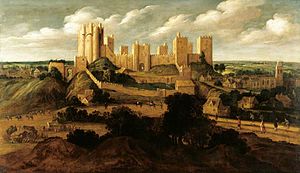 Lua error in Module:Coordinates at line 668: callParserFunction: function "#coordinates" was not found. Pontefract (or Pomfret) Castle is a castle in the town of Pontefract, in the City of Wakefield, West Yorkshire, England. King Richard II is thought to have died there. It was the site of a series of famous sieges during the 17th century English Civil War. 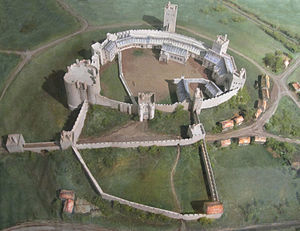 The castle, on a rock to the east of the town above All Saints Church,[1] was constructed in approximately 1070 by Ilbert de Lacy.[2] on land which had been granted to him by William the Conqueror as a reward for his support during the Norman Conquest. There is, however, evidence of earlier occupation of the site. Initially the castle was a wooden structure which was replaced with stone over time.[3] The Domesday Survey of 1086 recorded "Ilbert's Castle" which probably referred to Pontefract Castle.[4]

Robert de Lacy failed to support King Henry I during his power struggle with his brother, and the King confiscated the castle from the family during the 12th century.[3] Roger de Lacy paid King Richard I 3,000 marks for the Honour of Pontefract, but the King retained possession of the castle. His successor, King John gave Lacy the castle in 1199, the year he ascended the throne. Roger died in 1213 and was succeeded by his eldest son, John. However, the King took possession of Castle Donington and Pontefract Castle.[5] The de Lacys lived in the castle until the early 14th century.[3] It was under the tenure of the de Lacys that the magnificent multilobate donjon was built.[2]

In 1311 the castle passed by marriage to the estates of the House of Lancaster. Thomas, Earl of Lancaster (1278–1322) was beheaded outside the castle walls six days after his defeat at the Battle of Boroughbridge, a sentence placed on him by King Edward II himself in the great hall. This resulted in the earl becoming a martyr with his tomb at Pontefract Priory becoming a shrine.[3] It next went to Henry, Duke of Lancaster and subsequently to John of Gaunt, third son of King Edward III. He made the castle his personal residence, spending vast amounts of money improving it. 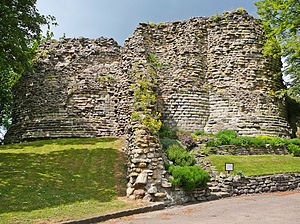 The ruins of Pontefract Castle's keep

Pomfret, Pomfret! O thou bloody prison,
Fatal and ominous to noble peers!
Within the guilty closure of thy walls
Richard the second here was hack'd to death;
And, for more slander to thy dismal seat,
We give thee up our guiltless blood to drink.

In 1536, the castle's guardian, Thomas Darcy, 1st Baron Darcy de Darcy handed over the castle to the leaders of the Pilgrimage of Grace, a Catholic rebellion from northern England against the rule of King Henry VIII. Lord Darcy was executed for this alleged "surrender," which the king viewed as an act of treason.

In 1541, during a royal tour of the provinces, it was alleged that King Henry's fifth wife, Queen Catherine Howard, committed her first act of adultery with Sir Thomas Culpeper at Pontefract Castle, a crime for which she was apprehended and executed without trial. Mary, Queen of Scots was lodged at the castle on 28 January 1569, travelling between Wetherby and Rotherham.[7] 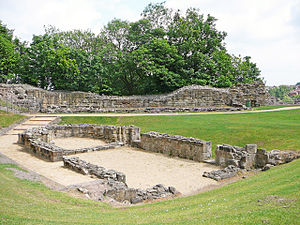 The ruins of St Clement's Chapel within the castle

The castle has been a ruin since 1644 when it was held as a Royalist stronghold during the English Civil War [6] and besieged at least three times by Parliamentarian forces, the latter being responsible for the castle's present dilapidated state and many of its scars. Pontefract Castle was noted by Oliver Cromwell, leader of the Parliamentarians, as "[...] one of the strongest inland garrisons in the kingdom".[2]

Apparently the slighting of the castle at the conclusion of the Second English Civil War had the full support of the surrounding population. They were grateful to destroy the castle and thus stop the fighting in their area. In the view of the locals, the castle was a magnet for trouble.[3]

It is still possible to visit the castle's 11th-century cellars which were used to store military equipment during the civil war.

Little survives of what "must have been one of the most impressive castles in Yorkshire" other than parts of the curtain wall and excavated and tidied inner walls. It had inner and outer baileys. Parts of a 12th-century wall and the Piper Tower's postern gate and the foundations of a chapel are the oldest remains. The ruins of the Round Tower or keep are on the 11th-century mound. The Great Gate flanked by 14th-century semi-circular towers had inner and outer barbicans. Chambers excavated into the rock in the inner bailey possibly indicate the site of the old hall and the North Bailey gate is marked by the remains of a rectangular tower.[1]

The most remarkable feature[according to whom?] of the current site is the remains of the donjon. Very few examples of this multilobed type exist. One is Clifford's Tower in nearby York. An identical example to York can be found at Étampes, France.