Pontoise is a commune in the northwestern suburbs of Paris, France. It is located 28.4 km (17.6 mi) from the centre of Paris, in the "new town" of Cergy-Pontoise.

Pontoise is the official préfecture (capital) of the Val-d'Oise département, although in reality the préfecture building and administration, as well as the department council (conseil général), are located inside the neighboring commune of Cergy, which is regarded as the de facto capital of Val-d'Oise.

Pontoise is also the seat of the Arrondissement of Pontoise. The sous-préfecture building and administration, unlike the préfecture, are located inside the commune of Pontoise.

Known as being a violent city in the past, with a criminal rate of 137.62 incidents per 1000 inhabitants, Cergy-Pontoise has experienced a significant decrease of violence in recent years. By 2008 the rate had declined to 99.87, although this is still considered high.[1]

Pontoise is the historical capital of the Vexin français. Its foundation dates from Roman times (Pontisara). At that time, the rock peak overhanging the river Oise supported the defense of the ford which was on the Roman road, the Chaussée Jules César, between Lutetia (Paris) and Rotomagus (Rouen). The road still exists and is now part of the N14 from Paris to Rouen. It is also known to many people as the birthplace of the alchemist Nicholas Flamel.

Pontoise is served by Pontoise station, a terminus on Paris RER line C and an intermediate terminus for suburban trains originating from Gare Saint-Lazare as well as a terminus for suburban trains from Gare du Nord. Some trains originating at Gare Saint-Lazare continue onto Gisors. For bus services, Stivo (formerly Services des Transports de l'Agglomération Nouvelle) operates within the new town of Cergy-Pontoise, and in and around Pontoise, with transport interchanges situated Place Charles de Gaulle and Parking Canrobert.

Pontoise is one of the capitals of the impressionist movement. Many painters took as a starting point the city and its area for the creation of landscapes. Camille Pissarro lived there for seventeen years. Other artists lived or worked in the area such as Vincent van Gogh (Auvers-sur-Oise), Paul Cézanne, Paul Gauguin, Charles-François Daubigny, Gustave Caillebotte, Gustave Loiseau, etc. 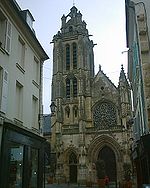 A famous religious sister, Blessed Marie de l'Incarnation (1566-1618), formerly known as Madame Acarie, the foundress of the Reformed Carmelites in France, lived, died and was buried here in the Carmelite Monastery.[4][5]