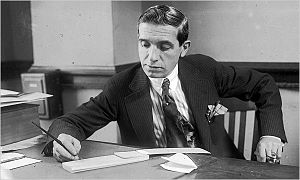 1920 photo of Charles Ponzi, the namesake of the scheme, while still working as a businessman in his office in Boston

Ponzi schemes occasionally begin as legitimate businesses, until the business fails to achieve the returns expected. The business becomes a Ponzi scheme if it then continues under fraudulent terms. Whatever the initial situation, the perpetuation of the high returns requires an ever-increasing flow of money from new investors to sustain the scheme.[1]

The scheme is named after Charles Ponzi,[2] who became notorious for using the technique in 1920.[3] The idea, present in novels (for example, Charles Dickens' 1844 novel Martin Chuzzlewit and 1857 novel Little Dorrit each described such a scheme),[4] was actually performed in real life by Ponzi who with his operation took in so much money that it was the first to become known throughout the United States. Ponzi's original scheme was based on the arbitrage of international reply coupons for postage stamps; however, he soon diverted investors' money to make payments to earlier investors and himself.[1]

Typically, extraordinary returns are promised on the original investment[5] and vague verbal constructions such as "hedge futures trading", "high-yield investment programs", or "offshore investment" might be used. The promoter sells shares to investors by taking advantage of a lack of investor knowledge or competence, or using claims of a proprietary investment strategy which must be kept secret to ensure a competitive edge.

Ponzi schemes sometimes commence operations as legitimate investment vehicles, such as hedge funds. For example, a hedge fund can degenerate into a Ponzi scheme if it unexpectedly loses money (or simply fails to legitimately earn the returns promised and/or thought to be expected) and if the promoters, instead of admitting their failure to meet expectations, fabricate false returns and (if necessary) produce fraudulent audit reports.

A wide variety of investment vehicles or strategies, typically legitimate, have become the basis of Ponzi schemes. For instance, Allen Stanford used bank certificates of deposit to defraud tens of thousands of people. Certificates of deposit are usually low-risk and insured instruments, but the Stanford CDs were fraudulent.[6]

Initially the promoter will pay out high returns to attract more investors, and to lure current investors into putting in additional money. Other investors begin to participate, leading to a cascade effect. The "return" to the initial investors is paid out of the investments of new entrants, and not out of profits.

Often the high returns encourage investors to leave their money in the scheme, with the result that the promoter does not have to pay out very much to investors; he simply has to send them statements showing how much they have earned. This maintains the deception that the scheme is an investment with high returns.

Promoters also try to minimize withdrawals by offering new plans to investors, often where money is frozen for a longer period of time, in exchange for higher returns. The promoter sees new cash flows as investors are told they cannot transfer money from the first plan to the second. If a few investors do wish to withdraw their money in accordance with the terms allowed, their requests are usually promptly processed, which gives the illusion to all other investors that the fund is solvent.

Unraveling of a Ponzi scheme

When a Ponzi scheme is not stopped by the authorities, it sooner or later falls apart for one of the following reasons:[1]