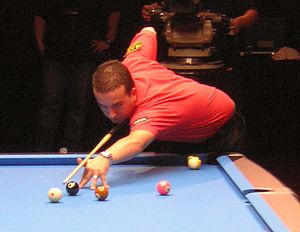 Pool, also more formally known as pocket billiards (mostly in North America) or pool billiards[1] (mostly in Europe and Australia), is the family of cue sports and games played on a pool table having six receptacles called pockets along the rails, into which balls are deposited as the main goal of play. Popular versions include eight-ball and nine-ball. An obsolete term for pool is six-pocket.[2]

There are hundreds of pool games. Some of the more well known include eight-ball, nine-ball, ten-ball, straight pool, one-pocket and bank pool.

There are also hybrid games combining aspects of both pool and carom billiards, such as American four-ball billiards, cowboy pool and bottle pool. 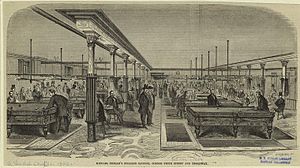 The Oxford English Dictionary states that pool is generally "any of various types of billiards for two or more players" but goes on to note that the first specific meaning of "a game in which each player uses a cue ball of a distinctive colour to pocket the balls of the other player(s) in a certain order, the winner taking all the stakes submitted at the start of the contest" is now obsolete and its other specific definitions are all for games that originate in the United States of America.[3]

In the United States, though the original "pool" game was played on a pocketless carom billiards table, the term later stuck to all new games of pocket billiards as the sport gained in popularity,[citation needed] and so outside the cue sports industry, which has long favored the more formal term pocket billiards, pool has remained the common name for the sport. 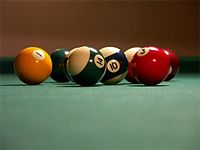 Modern cue sticks are generally 58.5 inches (148.6 cm) long for pool while cues prior to 1980 were designed for straight pool and had an average length of 57.5 inches (146.1 cm). By comparison, carom billiards cues are generally shorter with larger tips, and snooker cues longer with smaller tips. 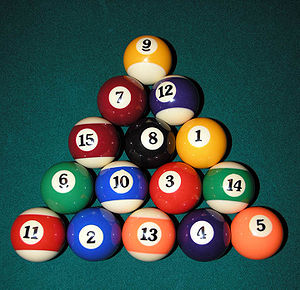 In the United States, the most commonly played game is eight-ball. The goal of eight-ball, which is played with a full rack of fifteen balls and the cue ball, is to claim a suit (commonly stripes or solids in the US, and reds or yellows in the UK), pocket all of them, then legally pocket the 8 ball, while denying one's opponent opportunities to do the same with their suit, and without sinking the 8 ball early by accident. In the United Kingdom the game is commonly played in pubs, and it is competitively played in leagues on both sides of the Atlantic. The most prestigious tournaments including the World Open are sponsored and sanctioned by the International Pool Tour. Rules vary widely from place to place (and between continents to such an extent that British-style eight-ball pool/blackball is properly regarded as a separate game in its own right). Pool halls in North America are increasingly settling upon the World Pool-Billiard Association International Standardised Rules. But tavern eight-ball (also known as "bar pool"), typically played on smaller, coin-operated tables and in a "winner keeps the table" manner, can differ significantly even between two venues in the same city. The growth of local, regional and national amateur leagues may alleviate this confusion eventually. 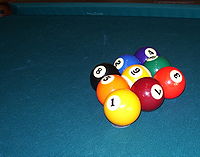 One of many correct nine ball racks: the 1 ball at the apex centered over the foot spot, the 9 ball at center, the other balls placed randomly, and all balls touching.

Nine-ball uses only the 1 through 9 balls and cue ball. It is a rotation game: The player at the table must make legal contact with the lowest numbered ball on the table or a foul is called. The game is won by legally pocketing the nine ball. Nine-ball is the predominant professional game, though as of 2006–2008 there have been some suggestions that this may change, in favor of ten-ball.[7][clarification needed] There are many local and regional tours and tournaments that are contested with nine-ball. The World Pool-Billiard Association (WPA) and its American affiliate, the Billiard Congress of America (BCA), publish the World Standardized Rules. The European professional circuit has instituted rules changes to make it more difficult to achieve a legal break shot.[7][8]

The largest nine-ball tournaments are the independent U.S. Open Nine-ball Championship and the WPA World Nine-ball Championship for men and women. Male professionals have a rather fragmented schedule of professional nine-ball tournaments. The United States Professional Pool Players Association (UPA) has been the most dominant association of the 1990s and 2000s. A hotly contested event is the annual Mosconi Cup, which pits invitational European and U.S. teams against each other in one-on-one and scotch doubles nine-ball matches over a period of several days. The Mosconi Cup games are played under the more stringent European rules, as of 2007.[8]

A variant using only three balls, generally played such that the player at turn continues shooting until all the balls are pocketed, and the player to do so in the fewest shots wins. The game can be played by two or more players. Dispenses with some fouls common to both nine- and eight-ball.

One-pocket is a strategic game for two players. Each player is assigned one of the corner pockets on the table. This is the only pocket into which he can legally pocket balls. The first player to pocket the majority of the balls (8) in his pocket wins the game. The game requires far more defensive strategy than offensive strategy, much unlike eight-ball, nine-ball, or straight pool. Most times, accomplished players choose to position balls near their pocket instead of trying to actually pocket them. This allows them to control the game by forcing their opponent to be on defense instead of taking a low percentage shot that could result in a loss of game. These low percentage shots are known as "flyers" by one-pocket aficionados.

Bank pool has been gaining popularity in recent years. Bank pool can be played with a full rack (can be a long game), but is more typically played with nine balls (frequently called "nine-ball bank"). The balls are racked in nine-ball formation, but in no particular order. The object of the game is simple: to be the first player to bank five balls in any order (eight balls when played with a full rack). Penalties and fouls are similar to one pocket in that the player committing the foul must spot a ball for each foul. This must be done before the incoming player shoots.

As a competitive sport, pool is governed internationally by the World Pool-Billiard Association (WPA), which has multi-national, regional affiliates comprising the All Africa Pool Association (AAPA), Asian Pocket Billiard Union (APBU, including the Middle East), Billiard Congress of America (BCA, Canada and the US), Confederation Panamerica of Billiards (CPB, Latin America and Caribbean), European Pocket Billiard Federation (EPBF, including Russia and the Near East), and Oceania Pocket Billiard Association (OPBA, Australia, New Zealand, Pacific islands) The WPA represents pool in the World Confederation of Billiard Sports, which in turn represents all forms of cue sports (including carom billiards and snooker) in the International Olympic Committee.