Map showing the location of Poole Harbour within Dorset. 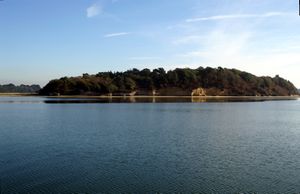 Green Island, one of the islands within Poole Harbour

Poole Harbour is a large natural harbour in Dorset, southern England, with the town of Poole on its shores. The harbour is a drowned valley (ria) formed at the end of the last ice age and is the estuary of several rivers, the largest being the Frome. The harbour has a long history of human settlement stretching to pre-Roman times. The harbour is extremely shallow (average depth: 48 cm), with one main dredged channel through the harbour, from the mouth to Holes Bay.[1]

Poole Harbour has an area of approximately 36 square kilometres (14 sq mi)[2] and is claimed to be the largest natural harbour in Europe. Contrary to some claims[examples needed], it is not the largest natural harbour in the world, New Zealand's 947 km2 (366 sq mi) Kaipara Harbour and San Francisco Bay in California with a conservative estimate of 1,040 km2 (400 sq mi) covered are significantly larger. 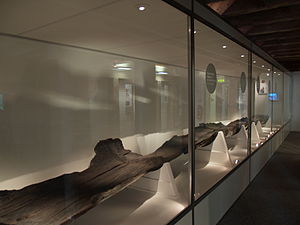 The Poole Logboat was excavated from Poole Harbour and is over 2,000 years old. It is on display in Poole Museum. 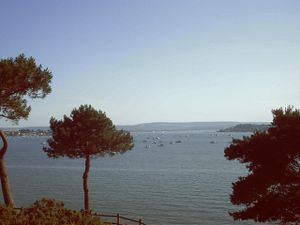 View across the harbour looking west from Lilliput, Poole

In 1964 during harbour dredging, the waterlogged remains of a 2000-year-old Iron Age logboat were found off Brownsea Island. Dated at about 295 BC, the 10 metres (33 ft) Poole Logboat is one of the largest vessels of its type from British waters. The low freeboard would have limited its use to within Poole Harbour.

Poole was used by the Romans as an invasion port for the conquest of southern England, who established the settlement at Hamworthy, now the western half of Poole. A Roman Road ran north from Hamworthy to Badbury Rings, a Roman transport hub. At the time of the Norman Conquest, Poole was a small fishing village.

The port grew, and in 1433 Poole was made Dorset's Port of the Staple for the export of wool. Medieval Poole had trading links from the Baltics to Italy. In the 17th century the town began trading with North America, in particular Newfoundland, and the town became very wealthy. In the 18th century Poole was the principal British port trading with North America. At the start of the 19th century, 90% of Poole's population's employment was directly dependent on the harbour, but this dropped to 20% during the century as the railways reached the town, and deep-hulled boats moved up the coast to Southampton, which had a deeper harbour and is closer to London. With regular dredging of a channel through the harbour, it has regained some importance. 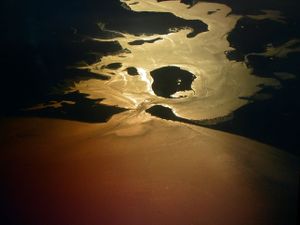 Aerial view of the harbour entrance, looking west-north-west. The large island just inside the entrance is Brownsea Island; to its left are Furzey Island and then Green Island. 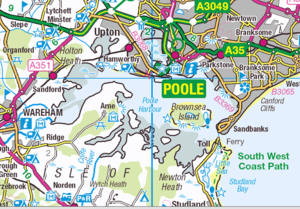 The entrance to Poole Harbour is from the east, via Poole Bay and the English Channel. Entering the harbour, heading west, on either side are the shores of Studland beach (south west) and Sandbanks (in particular, the Haven Hotel and the peninsula, north east). Directly ahead are several islands, the largest of which is Brownsea Island.

Following the harbour anti-clockwise, heading north-east passes the built up residential settlements of Poole including Lilliput and Parkstone (east). About 4 miles (6.4 km) north-west of the entrance of the harbour is the entrance to Poole Quay and the Holes Bay (see below). Directly west of the main part of Poole is Hamworthy. Continuing anti-clockwise, heading west around the Harbour are the settlements of Upton and Wareham, as well as the outlet of the River Piddle. This area of water within the Harbour is known as Wareham Channel and includes other places such as Rockley Sands.

Continuing anti-clockwise, now heading south are the majority of the islands within the Harbour as well as several small channels and inlets. To the east is Arne Bay and the Wych channel. The majority of land in this area is heathland, and there are few settlements, as opposed to western part of the Harbour. Directly south is Long Island, Round Island and Ower Bay. Green Island, Furzey Island and Brownsea Island (in that order) are to the east, with Newton Bay and Brands Bay (this area has several oil wells) to the south. This area of water is known as the South Deep. Continuing anti-clockwise comes back to the entrance to the Harbour and to Poole Bay, with Studland beach immediately south-east.

Lytchett Bay lies to the north of the Harbour and flows into it through a narrow channel near the edge of the suburb of Hamworthy.

Holes Bay is a tidal inland lake which lies to the north of Poole Harbour. It is a designated harbour quiet area. The entrance to the bay is a small inlet from the main harbour. Spanning the inlet are two bridges: Poole Bridge and the new Twin Sails Bridge, the latter officially opened in 2012 and costing around £37,000,000. Access to Holes Bay for vessels with a draft greater than 2 metres (6.6 ft) is only possible when the bridges are lifted, which occurs several fixed times daily and sometimes on request. The new bridge is intended to help reduce traffic jams by ensuring at least one bridge is open to vehicular traffic at any one time.

The bay contains Pergin's Island, and the South Western railway line runs west to east on a causeway across the bay. To the north of the bay is Upton Country Park[3]

Holes Bay is the location of the Royal National Lifeboat Institution (RNLI) training school, attached to their Poole headquarters. Uses of the bay include fishing, kayaking and small leisure craft. A large marina known as Cobbs Quay is on the west side of the bay. On its east side the bay runs parallel to the A350.

Poole Harbour is the location of a number of islands, of various sizes. These islands include: 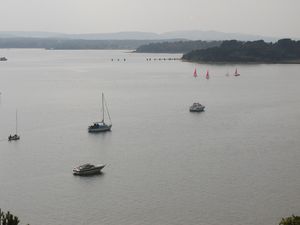 A quiet corner of the harbour, looking south from Brownsea Island

The harbour lies on a band of weak gravel and clay which is easily eroded by the rivers and sea. This band is bordered by two bands of chalk, the Purbeck Hills and Isle of Wight to the south, and the Dorset Downs and South Downs to the north. The clay extends west up the Frome valley to Dorchester, and would originally have extended east beyond Portsmouth in Hampshire. Before the last ice age the River Frome continued to flow east through what is now the Solent, joining the Stour, Beaulieu, Test, Itchen and Hamble, before flowing into the English Channel to the east of the present day Isle of Wight. A relatively resistant chalk ridge ran continuously from the Purbeck Hills to the Isle of Wight, which the rivers could not break through. When the glaciers of the north of the island of Great Britain melted, the south of England sank slightly, flooding the Solent valley and Southampton Water to form their characteristic rias (flooded estuaries). About 7,000 years ago, increased erosion from the sea and the increased flow caused by the change in climate broke through the chalk hills, cutting the Isle of Wight off from the Isle of Purbeck and flooding what is now the Solent and Christchurch Bay, leaving Poole Harbour as the estuary of the Frome. 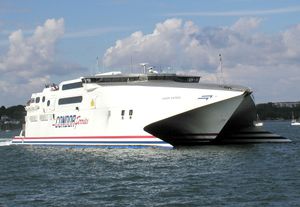 Coastal trading vessels are also frequent visitors, unloading various cargos on the quaysides at Hamworthy, and fleet of fishing vessels operates from the south end of Poole Quay. There is considerable leisure usage of the harbour, by a combination of yachts and other private craft, cruise boats that ply the harbour, and ferries that provide a passenger link to Brownsea Island. The harbour is managed by the Poole Harbour Commissioners (PHC), who represent all aspects of commercial and leisure activity in the harbour.[6] Their duties include maintaining the shipping channels for the ferries and cargo vessels, enforcing harbour speed limits, improving port facilities and assisting with nature conservation.[7]

In November 2005 the main shipping channels into the harbour and the Port of Poole were dredged to accommodate modern ferries at all states of the tide.[8] The project was carried out by Van Oord, and on completion the depth had been increased from 6 metres (20 ft) to 7.5 metres (25 ft). Approximately 1.8 million cubic metres of sand and silt were dredged from the approach channels to the Harbour and port, and 1.1 million m3 was made available to the local beaches of Poole, Bournemouth and Purbeck for beach replenishment.[8]

Poole Harbour Commissioners define the main shipping channels,[9] in which leisure craft should take care, as : 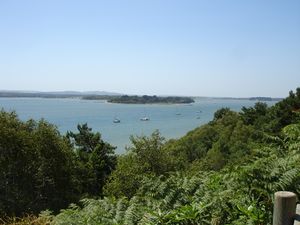 Looking south-west from Brownsea Island – Furzey Island is centre, with Green Island directly behind, to the left. Round Island can also be seen to the right of the picture with the Arne Peninsula behind it.

Much of the north side of the harbour is a built-up area, including the town of Poole, and the conurbation which continues 10 miles (16 km) eastwards along the coast. The west and south sides of the harbour and part of the Purbeck Heritage Coast are important wildlife havens, as are the five large islands in the harbour, which are home to the endangered red squirrel. The harbour is an area of international importance for wildlife conservation and borders three National Nature Reserves, including the internationally important Studland and Godlingston Heath NNR, and a number of local and non-statutory nature reserves run by organisations such as the National Trust and RSPB, notably Arne. The mouth of the harbour is partially blocked by Sandbanks, a spit on the north, which is built up and part of Poole, and by Studland to the south, which is another important wildlife area.

Four rivers drain into Poole harbour, the largest being the River Frome, which flows from the west through Dorchester and Wareham. The harbour is very shallow in places and has extensive mud flat and salt marsh habitats, as well as muddy and sandy shores and seagrass meadows. The area is an extremely popular recreation and tourism area, and local authorities and organisations have to carefully manage the tourism to prevent damage to the habitats.

The south shore of the harbour, including Wytch Heath and Godlingstone Heath, is open heathland of little agricultural use. During the 20th century there was some afforestation with conifer plantations. Around Wareham Forest in the west this has been for commercial forestry, but on the southern shore the plantations conceal the Wytch Farm oil wells.

File:Wakeboarderpoole.jpg
A wakeboarder riding down the Wareham channel

Due to the ever increasing popularity of pleasure boating in the United Kingdom, the harbour has seen a rapid increase in the private ownership of pleasure vessels over the past decade, most of which are housed in private marinas around the harbour. Due to this increase, Poole has seen a rise in the number of maritime-oriented businesses.

With the popularity of watersports such as water skiing, wakeboarding, windsurfing and kitesurfing, Poole Harbour Commissioners have designated areas within the harbour almost exclusively for sport participation – virtually unrestricted from most regular harbour rules. Poole is also fortunate in that wind conditions are variable; wind conditions can be calm for sports such as wakeboarding, and a short while later strong for sports such as windsurfing. Most of these sports benefit from the harbour's generally flat water conditions. As a result, local watersport businesses operate around the harbour.