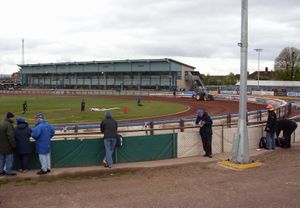 Poole Stadium is a greyhound racing venue and speedway track located in the town centre of Poole, Dorset in England.[1] The stadium is owned by the Borough of Poole.[2] It was built in the early 1930s in an attempt to provide a source of entertainment to the residents of Poole during the Great Depression. Due to a sponsorship deal with local radio station Wave 105, the stadium is also known as the Wave 105 Stadium. It is also often referred to as Wimborne Road, which is a road that runs adjacent to the stadium. During weekdays, the stadium's large car park is used to provide parking for Poole Hospital's park and ride scheme.[3]

In 1933 local semi-professional football team Poole Town F.C. moved to Poole Stadium where they began to play their home games in the Western Football League. In the 1946/47 season they had a run in the qualifying rounds of the FA Cup which took them through to a first round match against Queens Park Rangers. Poole Town drew 2–2 at Loftus Road, but lost 6–0 in the replay in front of a then record breaking Poole Stadium crowd of 10,224. They again reached the first round in the 1962/63 season and held Watford F.C. to a 2–2 draw at Vicarage Road, but lost the replay at Poole Stadium in front of an 11,155 crowd.[4]

Poole Town were based at the stadium for 61 years until Poole Council forced them to leave in 1994, blaming low attendances.[5] During their stay at the stadium, the club had financed improvements to the stadium such as a 1,100 seater grandstand on the east side of the football pitch built in 1960, and covered terracing on the west side.

Greyhound racing was introduced to the stadium in 1960 and continued to take place there up until 1990 when the greyhound track was removed to accommodate a larger football pitch.[6] Football no longer took place at the stadium after 1994 and greyhound racing returned when Stadia UK were given a long term lease on the stadium by Poole Borough Council. Stadia UK financed the construction of a modern glass fronted grandstand on the east side of the stadium in 1997 which incorporated a 312 seat restaurant, two bars, full Tote betting facilities and multiple viewing screens.[7] Race nights take place on Tuesday, Saturday and Sunday nights.

The stadium has been home to speedway team the Poole Pirates since the club was created in 1948 and speedway has taken place at the stadium every year since.[6] Prior to 1948, a cycle track had surrounded the football pitch until it was replaced with the larger speedway track.[6] Poole Stadium was chosen to host the 2004 Speedway World Cup final by organiser Benfield Sports International (BSI).[8] Poole hosted the qualifying race-off and the final which took place on 7 August with Sweden becoming the 2004 World Champions.[9] Temporary stands were erected around the corners of the track to provide 2,200 extra seats.[10] The official attendance figure at the stadium for the final was 7,131.[9]