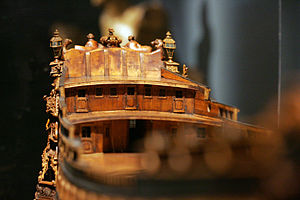 Poop deck of a model of the Soleil-Royal, as seen from the forecastle

In naval architecture, a poop deck is a deck that forms the roof of a cabin built in the rear, or "aft", part of the superstructure of a ship.

The name originates from the French word for stern, la poupe, from Latin puppis. Thus the poop deck is technically a stern deck, which in sailing ships was usually elevated as the roof of the stern or "after" cabin, also known as the "poop cabin". In sailing ships, with the helmsman at the stern, an elevated position was ideal for both navigation and observation of the crew and sails.[1]

On modern, motorized warships, the ship functions which were once carried out on the poop deck have been moved to the bridge, usually located on the superstructure in the center of ships, or the starboard side island of aircraft carriers.