Adrian IV is the only Englishman (as of 2016) to have occupied the papal throne.[1] It is believed that he was born in Bedmond in the parish of Abbots Langley in Hertfordshire and received his early education at the Abbey School, St Albans.[2][3][4][5]

Nicholas' father was Robert, who later became a monk at St Albans.[6] Nicholas went to Paris and later became a canon regular of the cloister of St Rufus monastery near Arles. He rose to be prior and was then soon unanimously elected abbot. This election has been traditionally dated to 1137,[7] but evidence from the abbey's chronicles suggests that it happened about 1145.[8]

His reforming zeal as abbot led to the lodging of complaints against him at Rome; but these merely attracted to him the favourable attention of Pope Eugene III, who created him Cardinal Bishop of Albano[9] in December 1149.[10]

From 1152 to 1154 Nicholas was in Scandinavia as papal legate, establishing an independent archepiscopal see for Norway at Trondheim, a place he chose chiefly in honour of St Olaf.[11] This led him to create the Diocese at Hamar, and, according to tradition, to form cathedral schools in Norway's bishopric cities. These schools were to have a lasting effect on education and Catholic spirituality in Norway (even after the Reformation in Norway).[12] (Norway's cathedral schools persisted, although they later lost their formal ties to the church.) Nicholas made arrangements which resulted in the recognition of Gamla Uppsala (Old Uppsala) as seat of the Swedish metropolitan in 1164 (later moved to Uppsala). As compensation for territory thus withdrawn, the Danish archbishop of Lund was made legate and perpetual vicar and given the title of primate of Denmark and Sweden.[9] Nicholas was accompanied to Scandinavia by another English-born priest, Henry, Bishop of Finland (d. 1156), who would later be venerated by Catholics, Lutherans and Anglicans as Saint Henry of Uppsala.

On his return to Rome, Nicholas was received with great honour by Pope Anastasius IV. On the death of Anastasius, Nicholas was elected pope on 3 December 1154,[13] taking the name Adrian IV. He at once endeavoured to bring down Arnold of Brescia, the leader of the anti-papal faction in Rome. Disorder within the city led to the murder of a cardinal, causing Adrian, shortly before Palm Sunday 1155, to take the previously unheard-of step of putting Rome under interdict.[9] This greatly affected the number of pilgrims and thereby hit the local economy. Without the Easter services the pilgrims would not visit. The Senate (City Council of Rome) thereupon exiled Arnold, and the pope, with the cooperation of Frederick I (Barbarossa), was instrumental in procuring his execution.[9] 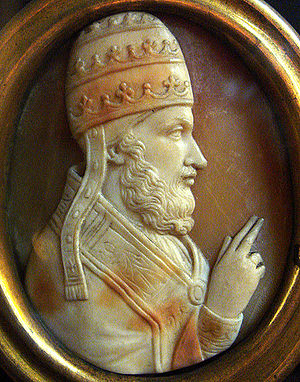 In 1155, Byzantine Emperor Manuel Comnenus reconquered southern Italy, landing his forces in the region of Apulia. Making contact with local rebels who were hostile to the Sicilian crown, Greek forces quickly overran the coastlands and began striking inland. Pope Adrian IV watched these developments with some satisfaction. The Papacy was never on good terms with the Normans of Sicily, except when under duress by the threat of direct military action. For Adrian, having the Eastern Roman Empire on its southern border was preferable to having to deal constantly with the troublesome Normans. Therefore, negotiations were hurriedly carried out, and an alliance was formed between Adrian and Manuel. Adrian undertook to raise a body of mercenary troops from Campania. Meanwhile, Manuel dreamed of restoration of the Roman Empire; this was, however, at the cost of a potential union between the Orthodox and the Catholic Church. Negotiations for union of the eastern and western churches, which had been in a state of schism since 1054, soon got under way. The combined Papal-Byzantine forces joined with the rebels against the Normans in Southern Italy, achieving a string of rapid successes as a number of cities yielded either to the threat of force or to the lure of gold.

But just as the war seemed decided in the allies' favour, things started to go wrong. The Greek commander Michael Palaeologus alienated some of his allies by his arrogance, and this stalled the campaign as rebel Count Robert of Loritello refused to speak to him. Although the two were reconciled, the campaign lost some of its momentum. Worse was to come: Michael was soon recalled to Constantinople. Although his arrogance had slowed the campaign, he was a brilliant general in the field, and his loss was a major blow to the allied campaign. The turning point was the battle for Brindisi, where the Sicilians launched a major counterattack by both land and sea. At the approach of the enemy, the mercenaries who were serving in the allied armies demanded impossible increases in their pay; when these were refused, they deserted. Even the local barons started to melt away, and soon Adrian's Byzantine allies were left hopelessly outnumbered. The naval battle was decided in the Sicilians' favour, and the Byzantine commander was captured. The defeat at Brindisi put an end to the restored Byzantine reign in Italy,[11] and by 1158 the Byzantine Army had left Italy.

Hopes for a lasting alliance with the Byzantine Empire had also come up against insuperable problems. Pope Adrian IV's conditions for a union between the eastern and western churches included recognition of his religious authority over Christians everywhere; the Emperor in turn required recognition of his secular authority. Neither East nor West could accept such conditions. Adrian's secular powers were too valuable to be surrendered and Manuel's subjects could never have accepted the authority of the distant Bishop of Rome. In spite of his friendliness towards the Roman Church, Adrian never felt able to honour Manuel with the title of "Augustus". Ultimately, a deal proved elusive, and the two churches remained divided.

Adrian IV and the Norman invasion of Ireland

In 1155, three years after the Synod of Kells, Adrian IV published the Papal Bull Laudabiliter, which was addressed to the Angevin King Henry II of England. He urged Henry to invade Ireland to bring its church under the Roman system and to conduct a general reform of governance and society throughout the island. The authenticity of this grant, the historian Edmund Curtis says, is one of "the great questions of history." He states that the matter was discussed at a Royal Council at Winchester, but that Henry's mother, the Empress Matilda, had protested, and the expedition was put off to another time.[11]

In Ireland however, nothing seems to have been known of it, and no provision appears to have been made to defend against the prospect of Angevin Norman aggression, despite their westward expansion throughout England and Wales.[14] Ernest F. Henderson states that the existence of this Bull is doubted by many[15] while, in noting that its authenticity has been questioned without success, P. S. O'Hegarty suggests that the question is now purely an academic one. It is notable that decisions of Pope Alexander III, his successor, Pope Lucius III, and King Henry VIII in proclaiming the Crown of Ireland Act 1542 were predicated on this document.[16]

The Normans did invade Ireland, beginning with a small landing of Norman knights in 1169, followed by Henry's landing with a much larger force in 1171.

Barbarossa and the death of Adrian IV

At the diet of Besançon in October 1157, the legates presented to Frederick I a letter from Adrian IV which alluded to the beneficia or "benefits" conferred upon the Emperor, and the German chancellor translated this beneficia in the feudal sense of the presentation of property from a lord to a vassal (benefice). Frederick was infuriated by the suggestion that he was dependent on the Pope, and in the storm which ensued the legates were glad to escape with their lives, and the incident at length closed with a letter from the Pope, declaring that by beneficium he meant merely bonum factum or "a good deed," i.e. the coronation. The breach subsequently became wider, and the Emperor was about to be excommunicated when Adrian died at Anagni on 1 September 1159,[9] reputedly choking on a fly in his wine, but probably of quinsy.

His biography was first written by Cardinal Boso in his extension to the Liber Pontificalis.[17]

Among a group of modern houses in the village of Bedmond near St Albans is a small plaque recording the spot as his birthplace, historically in the parish of Abbots Langley. Today the village has several streets named after him, including Popes Road, Adrian Road and Breakspeare Road.[18]

There is a Nicholas Breakspear Catholic School in St Albans.