Pope Adrian VI was born in the Prince-Bishopric of Utrecht in the Netherlands and was the last non-Italian pope until Pope John Paul II of Poland became the 264th pope in 1978. Pope Adrian VI and his eventual successor Pope Marcellus II are the only popes of the modern era to retain their baptismal names after their election. 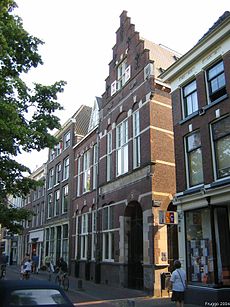 Adriaan Florensz was born on 2 March 1459 in the city of Utrecht, which was then the capital of the Prince-Bishopric of Utrecht,[2] a part of the Burgundian Netherlands in the Holy Roman Empire. He was born into modest circumstances as the son of Florens Boeyensz, also born in Utrecht, and his wife Geertruid. Adrian consistently signed with Adrianus Florentii or Adrianus de Traiecto ("Adrian of Utrecht") in later life, suggesting that his family did not yet have a surname but used patronymics only.[3]

Adrian was probably raised in a house on the corner of the Brandsteeg and Oude Gracht that was owned by his grandfather Boudewijn (Boeyen, for short). His father, a carpenter and likely shipwright, died when Adrian was 10 years or younger.[4] Adrian studied from a very young age under the Brethren of the Common Life, either at Zwolle or Deventer and was also a student of the Latin school (now Gymnasium Celeanum) in Zwolle.[5] In June 1476, he started his studies at the University of Leuven, where he pursued philosophy, theology and Canon Law, thanks to a scholarship granted by Margaret of York, Duchess of Burgundy.

After the regular 12 years of study, Adrian became a Doctor of Theology in 1491. He had been a teacher at the University since 1490, was chosen vice-chancellor of the university in 1493, and Dean of St. Peter's in 1498. In the latter function he was permanent vice-chancellor of the University and de facto in charge of hiring. His lectures were published, as recreated from his students' notes; among those who attended was the young Erasmus. Adrian offered him a professorate in 1502, but Erasmus refused.[3]

In November 1506 Margaret of Austria, Duchess of Savoy became Governess of the Habsburg Netherlands and chose Adrian as her advisor. The next year Emperor Maximilian I appointed him also tutor to his seven-year-old grandson, and Margaret's nephew, Charles, who in 1519 would become Emperor Charles V. By 1512 Adrian was Charles' advisor and his court obligations were so time consuming that he quit his positions at the university.[3]

In 1515, Charles sent Adrian to Spain to convince his maternal grandfather, Ferdinand II of Aragon, that the Spanish lands should become under his rule, and not Charles' Spanish-born younger brother Ferdinand, whom his grandfather had in mind. Adrian succeeded in that just before Ferdinand's death in January 1516.[3] Charles V subsequently made Adrian Bishop of Tortosa and on 14 November 1516 commissioned him Inquisitor General of Aragon. The following year, Pope Leo X (1513–21) made Adrian a cardinal,[2] naming him Cardinal Priest of the Basilica of Saints John and Paul.

During the minority of Charles V, Adrian was named to serve with Cardinal Francisco Jimenez de Cisneros as co-regent of Spain. After the death of Jimenez, Adrian was appointed (14 March 1518) General of the Reunited Inquisitions of Castile and Aragon, in which capacity he acted until his departure for Rome.[6] During this period, Charles V left for the Netherlands in 1520, making the future pope Regent of Spain, during which time he had to deal with the Revolt of the Comuneros.

In the conclave after the death of the Medici Pope Leo X, Leo's cousin, Cardinal Giulio de' Medici, was the leading figure. With Spanish and French cardinals in a deadlock, the absent Adrian was proposed as a compromise and on 9 January 1522 he was elected by an almost unanimous vote. Charles V was delighted upon hearing that his tutor had been elected to the papacy but soon realised that Adrian VI was determined to reign impartially. Francis I of France, who feared that Adrian would become a tool of the Emperor, and had uttered threats of a schism, later relented and sent an embassy to present his homage.

Fears of a Spanish Avignon based on the strength of his relationship with the Emperor as his former tutor and regent proved baseless, and Adrian left for Italy at the earliest opportunity, making his solemn entry into Rome on 29 August. He was crowned in St. Peter's Basilica on 31 August 1522, at the age of 63, and immediately entered upon the path of the reformer. The 1908 edition of the Catholic Encyclopedia characterised the task that faced him:

"To extirpate inveterate abuses; to reform a court which thrived on corruption, and detested the very name of reform; to hold in leash young and warlike princes, ready to bound at each other's throats; to stem the rising torrent of revolt in Germany; to save Christendom from the Turks, who from Belgrade now threatened Hungary, and if Rhodes fell would be masters of the Mediterranean-- these were herculean labours for one who was in his sixty-third year, had never seen Italy, and was sure to be despised by the Romans as a 'barbarian'.[2]

His plan was to attack notorious abuses one by one; however, in his attempt to improve the system of indulgences he was hampered by his cardinals. He found reduction of the number of matrimonial dispensations to be impossible, as the income had been farmed out for years in advance by Pope Leo X.[6]

Adrian VI was not successful as a peacemaker among Christian princes, whom he hoped to unite in a war against the Turks. In August 1523 he was forced into an alliance with the Empire, England, and Venice against France; meanwhile, in 1522 the Sultan Suleiman I (1520–66) had conquered Rhodes.

In his reaction to the early stages of the Lutheran revolt, Adrian VI did not completely understand the gravity of the situation. At the Diet of Nuremberg, which opened in December 1522, he was represented by Francesco Chiericati, whose private instructions contain the frank admission that the disorder of the Church was perhaps the fault of the Roman Curia itself, and that it should be reformed.[7][8] However, the former professor and Inquisitor General was strongly opposed to any change in doctrine and demanded that Luther be punished for teaching heresy.[6]

He made only one cardinal in the course of his pontificate, Willem van Enckevoirt, made a cardinal priest in a consistory held on September 10, 1523.

Adrian VI held no beatifications in his pontificate but canonized Saints Antoninus of Florence and Benno of Meissen on 31 May 1523.

Charles V's ambassador in Rome, Juan Manuel, lord of Belmonte, wrote that he was worried that Charles' influence over Adrian waned after Adrian's election, writing " The Pope is "deadly" afraid of the College of Cardinals. He does whatever two or three cardinals write to him in the name of the college."[9] 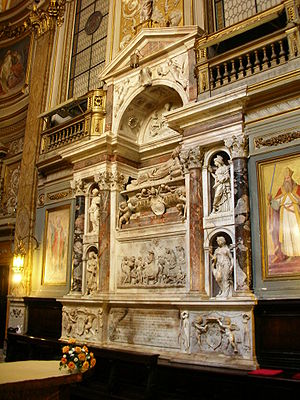 Adrian VI died in Rome on 14 September 1523, after a somewhat brief tenure as pope. Most of his official papers were lost after his death. He published Quaestiones in quartum sententiarum praesertim circa sacramenta (Paris, 1512, 1516, 1518, 1537; Rome, 1522), and Quaestiones quodlibeticae XII. (1st ed., Leuven, 1515). He is buried in the Santa Maria dell'Anima church in Rome.

He bequeathed property in the Low Countries for the foundation of a college at the University of Leuven that became known as Pope's College.

The pope was mocked by the people of Rome on the Pasquino, and the Romans, who had never taken a liking to a man they saw as a "barbarian", rejoiced at his death. 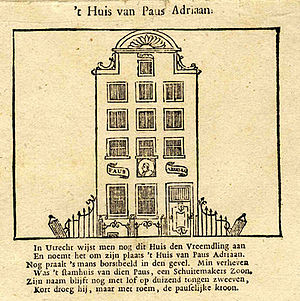 The birth house of pope Hadrian and accompanying poem. Detail of an engraving of 'Famous Dutch Men and Women'.

The first series of engravings used to educate Dutch school children at the turn of the 18th century includes Adrian VI in its woodcut on 'Famous Dutch Men and Women' with the following poem:

In Utrecht they still show the stranger this house,
And calls it the house of pope Adrian,
Still his bust stands in its façade, only slightly elevated,
It was the birth house of this pope, the son of a boat builder,
His name is still proudly spoken by thousands of tongues,
Short of time, but with honor, he wore the papal crown.

Italian writer Luigi Malerba used the confusion among the leaders of the Catholic Church, which was created by Adrian's unexpected election, as a backdrop for his 1995 novel, Le maschere (The Masks), about the struggle between two Roman cardinals for a well-endowed church office.

In an episode of the American TV show Law & Order entitled Divorce, a homeless man believes he is Pope Adrian VI.[10]