Born in Siena, a member of the illustrious banking family of Chigi and a great-nephew of Pope Paul V (1605–1621),[3] he was privately tutored and eventually received doctorates of philosophy, law, and theology from the University of Siena.

Papal legate and Secretary of State

In 1627 he began his apprenticeship as vice-papal legate at Ferrara, and on recommendations from two cardinals he was appointed successively Inquisitor of Malta[4] and nuncio in Cologne (1639–1651). There, he supported Urban VIII's condemnation of Jansenius' Augustinus by the papal bull In eminenti of 1642.

Though expected to take part in the negotiations which led in 1648 to the Peace of Westphalia, he declined to deliberate with persons whom the Catholic Church considered heretics, and protested, when it was finally completed, against the Treaty of Westphalia[5] that ended the Thirty Years' War (1618–1648) and established the balance of European power that lasted until the wars of the French Revolution (1789).

Pope Innocent X (1644–1655) recalled Chigi to Rome and subsequently made him Cardinal Secretary of State and Cardinal-Priest of Santa Maria del Popolo.[6]

When Innocent X died, Chigi, the candidate favoured by Spain, was elected pope after eighty days in the conclave, on 7 April 1655, taking the name of Alexander VII.

The conclave believed he was strongly opposed to the nepotism that had been a feature of previous popes. Indeed, in the first year of his reign, Alexander VII lived simply and forbade his relations even to visit Rome. A contemporary, John Bargrave (having visited Rome during the period following his election and then later during his papacy) wrote the following:[7]

In the first months of his elevation to the Popedom, he had so taken upon him the profession of an evangelical life that he was wont to season his meat with ashes, to sleep upon a hard couch, to hate riches, glory, and pomp, taking a great pleasure to give audience to ambassadors in a chamber full of dead men's sculls, and in the sight of his coffin, which stood there to put him in mind of his death. [His] extraordinary devotion and sanctity of life I found was so much esteemed that the noise of it spread far and near. But so soon as he had called his relations about him he changed his nature. Instead of humility succeeded vanity; his mortification vanished, his hard couch was turned into a soft featherbed, his dead men's sculls into jewels, and his thoughts of death into ambition — filling his empty coffin with money as if he would corrupt death, and purchase life with riches.

The prose may be slightly exaggerated but, indeed, in the consistory of 24 April 1656 he announced that his brother and nephews would be coming to assist him in Rome. The administration was given largely into the hands of his relatives, and nepotism became as luxuriously entrenched as it even had been in the Baroque Papacy: he gave them the best-paid civil and ecclesiastical offices, and princely palaces and estates suitable to the Chigi of Siena.

Urban and architectural projects in Rome 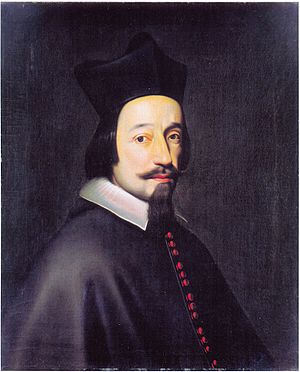 Fabio Chigi as Papal Nuntius to the Peace of Westphalia negotiations, by Anselm van Hulle (c. 1646) 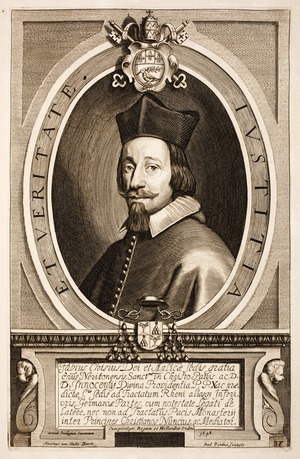 Engraving after the painting of Anselm van Hulle

A number of pontifs are renowned for their urban planning in the city of Rome—for example, Pope Julius II and Pope Sixtus V—but Alexander VII’s numerous urban interventions were not only diverse in scope and scale but demonstrated a consistent planning and architectural vision that the glorification and embellishment of the city, ancient and modern, sacred and secular, should be governed by order and decorum.[8][9]

Central to Alexander’s urbanism was the idea of teatro or urban theatre[10] whereby his urban interventions became the grand settings or showpieces appropriate to the dignity of Rome and the Head of the Catholic Church. Therefore, and although the scales are vastly different, the small Santa Maria della Pace and its piazza are as much a teatro as the imposing monumental colonnade that forms Piazza San Pietro in front of St. Peter's Basilica.

The various urban and architectural projects carried out during Alexander’s reign were recorded in engravings by Giovanni Battista Falda and the first volume was published in 1665. The volumes were published by Giovanni Giacomo de Rossi under the title Il Nuovo Teatro delle fabriche et edificij in prospettiva di Roma moderna sotto il felice pontificato di N.S. Alessandro VII.[11] A rival publication documenting these projects was published by Rossi's cousin Giovanni Battista de Rossi who employed the young Flemish architectural draughtsman Lieven Cruyl to produce drawings of Rome, 10 of which were published in 1666 under the title Prospectus Locorum Urbis Romae Insignium.[12]

His preferred architect was the sculptor and architect Gianlorenzo Bernini but he also gave architectural commissions to the painter and architect Pietro da Cortona. Of the three leading architects of the Roman High Baroque, only Francesco Borromini fared not so well under Alexander; this may be because he thought Borromini’s architectural forms willful but also Borromini could be notoriously difficult. Nonetheless, Alexander’s family heraldic emblems of the mons or mountains with stars and oak leaves, adorn Borromini’s church of Sant'Ivo alla Sapienza and many other works of his reign.[13]

Alexander took a keen personal interest in his urban and architectural projects and made notes of these in his diaries.[14] His projects in Rome included: the church and piazza at Santa Maria della Pace; the Via del Corso, Piazza Colonna and associated buildings; reworking of the Porta del Popolo, the Piazza del Popolo and Santa Maria del Popolo; Piazza San Pietro, the Scala Regia and interior embellishments in the Vatican Palace and St. Peter's; Sant'Andrea al Quirinale; part of the Palazzo del Quirinale; the obelisk and elephant in Piazza della Minerva.

Before being elected as Pontiff, Chigi served as Inquisitor on the Island of Malta where he resided mostly at The Inquisitor's Palace in Birgu (alias Citta' Vittoriosa). At that time Malta was a fiefdom of the Knights Hospitallers of the Sovereign Order of Saint John of Jerusalem, Knights of Malta.

The conversion of Queen Christina of Sweden (1632–1654) occurred during Alexander VII's reign. After her abdication the queen came to reside in Rome, where she was confirmed in her baptism by the Pope, in whom she found a generous friend and benefactor, on Christmas Day, 1655.

In foreign policy his instincts were not as humanist or as successful. Alexander VII's pontificate was shadowed by continual friction with Cardinal Mazarin, adviser to Louis XIV of France (1643–1715), who had opposed him during the negotiations that led to the Peace of Westphalia and who defended the prerogatives of the Gallican Church. During the conclave, he had been hostile to Chigi's election, but was in the end compelled to accept him as a compromise. However, he prevented Louis XIV from sending the usual embassy of obedience to Alexander VII, and, while he lived, he foiled the appointment of a French ambassador to Rome, diplomatic affairs being meantime conducted by cardinal protectors, generally personal enemies of the Pope. In 1662, the equally hostile Duc de Crequi was made ambassador. By his abuse of the traditional right of asylum granted to ambassadorial precincts in Rome, he precipitated a quarrel between France and the papacy, which resulted in Alexander VII's temporary loss of Avignon and his forced acceptance of the humiliating treaty of Pisa in 1664.

He favored the Spanish in their claims against Portugal, which had reestablished its traditional independence in 1640. His pontificate was also marked by protracted controversies with Portugal.

Alexander VII favoured the Jesuits. When the Venetians called for help in Crete against the Ottoman Turks, the Pope extracted in return a promise that the Jesuits should be permitted back in Venetian territory, from which they had been expelled in 1606. He also continued to take the Jesuit part in their conflict with the Jansenists, whose condemnation he had vigorously supported as advisor to Pope Innocent X. The French Jansenists professed that the propositions condemned in 1653 were not in fact to be found in Augustinus, written by Cornelius Jansen. Alexander VII confirmed that they were too, by the bull Ad Sanctam Beati Petri Sedem (16 October 1656) declaring that five propositions extracted by a group of theologians from the Sorbonne out of Jansen's work, mostly concerning grace and the fallen nature of man, were heretical, including the proposition according to which to say "that Christ died, or shed His blood for all men" would be a semipelagian error. He also sent to France his famous "formulary", that was to be signed by all the clergy as a means of detecting and extirpating Jansenism and which inflamed public opinion, leading to Blaise Pascal's defense of Jansenism. 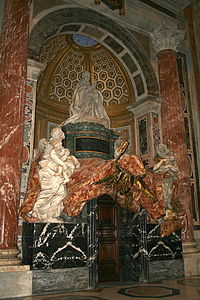 The tomb of Pope Alexander VII, by Gianlorenzo Bernini

Alexander VII died in 1667 and was memorialised in a spectacular tomb by Bernini. He was succeeded by Pope Clement IX (1667–69).

Alexander VII disliked the business of state, preferring literature and philosophy; a collection of his Latin poems appeared at Paris in 1656 under the title Philomathi Labores Juveniles. He also encouraged architecture, and the general improvement of Rome, where houses were razed to straighten and widen streets and where he had the opportunity to be a great patron for Gian Lorenzo Bernini: the decorations of the church of Santa Maria del Popolo, titular churches for several of the Chigi cardinals, the Scala Regia, the Chair of St. Peter in the Vatican Basilica. In particular, he sponsored Bernini's construction of the beautiful colonnade in the piazza of St. Peter's Basilica.

Alexander VII wrote one of the most authoritative documents related to the heliocentrism issue. He published his Index Librorum Prohibitorum Alexandri VII Pontificis Maximi jussu editus which presented anew the contents of the Index of Forbidden Books. According to Rev. William Roberts, he prefaced this with the bull Speculatores Domus Israel, stating his reasons: "in order that the whole history of each case may be known. 'For this purpose,' pursues the Pontiff, 'we have caused the Tridentine and Clementine Indices to be added to this general Index, and also all the relevant decrees up to the present time, that have been issued since the Index of our predecessor Clement, that nothing profitable to the faithful interested in such matters might seem omitted."[15] Among those included were the previous decrees placing various heliocentric works on the Index ("...which we will should be considered as though it were inserted in these presents, together with all, and singular, the things contained therein...") and using his Apostolic authority he bound the faithful to its contents ("...and approve with Apostolic authority by the tenor of these presents, and: command and enjoin all persons everywhere to yield this Index a constant and complete obedience...")[16] After Alexander VII's pontificate, the Index underwent a number of revisions.[17] "In 1758 the general prohibition against works advocating heliocentrism was removed from the Index of prohibited books, although the specific ban on uncensored versions of the Dialogue and Copernicus's De Revolutionibus remained. All traces of official opposition to heliocentrism by the church disappeared in 1835 when these works were finally dropped from the Index".[18] The Index was abolished entirely in 1966.[19]

Alexander VII's Apostolic Constitution Sollicitudo Omnium Ecclesiarum laid out the doctrine of the Immaculate Conception of the Blessed Virgin Mary in terms almost identical to those utilized by Pope Pius IX when he issued his infallible definition Ineffabilis Deus and the former work is cited in footnote 11 of the latter.