Pope Celestine V (Latin: Caelestinus V; 1215 – 19 May 1296), born Pietro Angelerio (according to some sources Angelario, Angelieri, Angelliero, or Angeleri), also known as Pietro da Morrone and Peter of Morrone, was Pope for five months from 5 July to 13 December 1294, when he resigned. He was also a monk and hermit who founded the order of the Celestines.

He was elected Pope in the Catholic Church's last non-conclave papal election ending a two-year impasse. Among the only surviving edicts he issued was the confirmation of the right of the Pope to abdicate; nearly all of his other official acts were annulled by his successor, Boniface VIII.[1] A week after issuing the decree, Celestine resigned, stating his desire to return to his humble, pre-papal life. On 13 December 1294, Celestine announced his resignation. Celestine V was subsequently imprisoned by Pope Boniface VIII in the castle of Fumone in the Campagna region, where he died on 19 May 1296 at the age of 81.[1]

In 1313, Celestine V was canonized. No subsequent Pope has taken the name "Celestine".

After his father's death he began working in the fields. His mother Maria was a key figure in Pietro's spiritual development: she imagined a different future for her deeply beloved son than becoming just a farmer or a shepherd. From the time he was a child, he showed great intelligence and love for others. He became a Benedictine monk at Faifoli in the Diocese of Benevento when he was 17. He showed an extraordinary disposition toward asceticism and solitude, and in 1239 retired to a solitary cavern on the mountain Morrone, hence his name (Peter of Morrone). Five years later he left this retreat, and went with two companions to a similar cave on the even more remote Mountain of Maiella in the Abruzzi region of central Italy, where he lived as strictly as possible according to the example of St. John the Baptist. Accounts exist of the severity of his penitential practices. 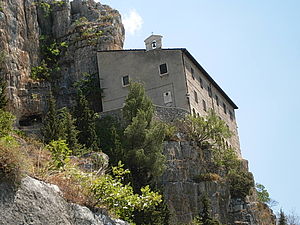 While living like this he founded, in 1244, the order subsequently named after him, the Celestines. A new religious community was formed, and Pietro gave them a rule formulated in accordance with his own practices. In 1264 the new institution was approved by Urban IV. The founder, having heard that it was probable that Pope Gregory X, then holding a council at Lyon, would suppress all such new orders as had been founded since the Lateran Council, having commanded that such institutions should not be further multiplied, went to Lyon. There he succeeded in persuading Gregory to approve his new order, making it a branch of the Benedictines and following the rule of Saint Benedict, but adding to it additional severities and privations. Gregory took it under the Papal protection, assured to it the possession of all property it might acquire, and endowed it with exemption from the authority of the ordinary. Nothing more was needed to ensure the rapid spread of the new association and Pietro lived to see himself "Superior-General" to thirty-six monasteries and more than six hundred monks. Pietro, however, cannot be accused of ambition or the lust of power when a monastic superior, any more than when he insisted on divesting himself of the Papacy, to which he was subsequently raised.

As soon as he had seen his new order thus consolidated he gave up the government of it to a certain Robert, and retired once again to a still more remote solitude to give himself up more entirely to solitary penance and prayer. Shortly afterwards, in a chapter of the order held in 1293, the original monastery of Majella being judged to be too desolate and exposed to too rigorous a climate, it was decided that Abbazia Morronese in the plains of Sulmona should be the headquarters of the order and the residence of the General-Superior, as it has continued to be to the present day. 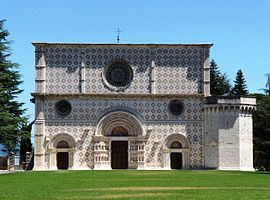 The cardinals assembled at Perugia after the death of Pope Nicholas IV in April 1292. After more than two years, a consensus had still not been reached. Pietro, well known to the cardinals as a Benedictine hermit, sent the cardinals a letter warning them that divine vengeance would fall upon them if they did not quickly elect a pope. Latino Malabranca, the aged and ill dean of the College of Cardinals cried out, "In the name of the Father, the Son, and the Holy Ghost, I elect brother Pietro di Morrone." The cardinals promptly ratified Malabranca's desperate decision. When sent for, Pietro obstinately refused to accept the papacy, and even, as Petrarch says, tried to flee, until he was finally persuaded by a deputation of cardinals accompanied by the king of Naples and the pretender to the throne of Hungary. Elected on 5 July 1294,[2] at age 79, he was crowned at Santa Maria di Collemaggio in the city of Aquila in the Abruzzo on 29 August, taking the name Celestine V.[3] 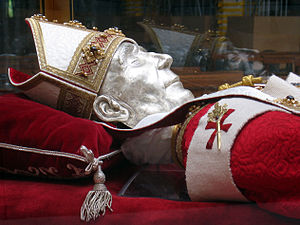 Shortly after assuming office, Celestine issued a papal bull granting a rare plenary indulgence to all pilgrims visiting Santa Maria di Collemaggio through its holy door on the anniversary of his papal coronation.[4] The Perdonanza Celestiniana festival is celebrated in L'Aquila every 28–29 August in commemoration of this event.[5]

With no political experience, Celestine proved to be an especially weak and incompetent pope.[6] He held his office in the Kingdom of Naples, out of contact with the Roman Curia and under the complete power of King Charles II. He appointed the king's favorites to church offices, sometimes several to the same office. One of these was Louis of Toulouse, whom Celestine ordered given clerical tonsure and minor orders, although this was not carried out. He renewed a decree of Pope Gregory X that had established stringent rules for papal conclaves after a similarly prolonged election. In one decree, he appointed three cardinals to govern the church during Advent while he fasted, which was again refused.[7]

Realizing his lack of authority and personal incompatibility with papal duties, he consulted with Cardinal Benedetto Caetani (his eventual successor) about the possibility of resignation.[7] This resulted in one final decree declaring the right of resignation, which he promptly exercised after five months and eight days in office, thus on 13 December 1294, Celestine V resigned.[8] In the formal instrument of renunciation, he recited as the causes moving him to the step: "The desire for humility, for a purer life, for a stainless conscience, the deficiencies of his own physical strength, his ignorance, the perverseness of the people, his longing for the tranquility of his former life".[9] Having divested himself of every outward symbol of papal dignity, he slipped away from Naples and attempted to retire to his old life of solitude.

The next Pope to resign of his own accord was Pope Benedict XVI in 2013, 719 years later. 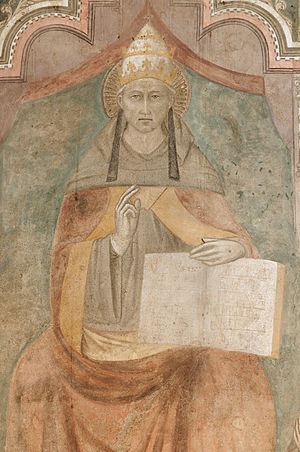 The former Celestine, now reverted back to Pietro Angelerio, was not allowed to become a hermit once again. Various parties had opposed his resignation and the new Pope Boniface VIII had reason to worry that one of them might install him as an antipope. To prevent this he ordered Pietro accompany him to Rome. Pietro escaped and hid in the woods before attempting to return to Sulmona to resume monastic life. This proved impossible, and Pietro was captured after an attempt to flee to Dalmatia was thwarted when a tempest forced his ship to return to port. Boniface imprisoned him in the castle of Fumone near Ferentino in Campagna, attended by two monks of his order where Pietro died after 10 months at the age of 81. His supporters spread the allegation that Boniface had treated him harshly and ultimately executed Pietro, but the historical evidence is lacking.[10] Pietro was buried at Ferentino, but his body was subsequently removed to the Basilica Santa Maria di Collemaggio in Aquila.

Philip IV of France, who had supported Celestine and bitterly opposed Boniface, nominated Celestine for sainthood following the election of Pope Clement V. The latter signed a decree of dispensation on 13 May 1306 to investigate the nomination.[11] He was canonized on 5 May 1313 after a consistory in which Boniface's Caetani family was outvoted by members of the rival Colonna family.[12]

Most modern interest in Celestine V has focused on his resignation.[13] He was the first pope to formalize the resignation process and is often said to have been the first to resign. In fact he was preceded in this by Pope Pontian (235), John XVIII (1009) Benedict IX (1045), and Gregory VI (1046).[14] As noted above, Celestine's own decision was brought about by mild pressure from the Church establishment. His reinstitution of Gregory X's conclave system established by the papal bull Ubi periculum has been respected ever since.

A 1966 visit by Pope Paul VI to Celestine's place of death in Ferentino along with his speech in homage of Celestine prompted speculation that the Pontiff was considering retirement.[15][16]

Celestine's remains survived the 2009 L'Aquila earthquake with one Italian spokesman saying it was "another great miracle by the pope".[17] They were then recovered from the basilica shortly after the earthquake.[18] While inspecting the earthquake damage during a 28 April 2009 visit to the Aquila, Pope Benedict XVI visited Celestine's remains in the badly damaged Santa Maria di Collemaggio and left the woolen pallium he wore during his papal inauguration in April 2005 on his glass casket as a gift.[19][20]

His entry in the Martyrologium Romanum for 19 May reads as follows:

At Castrum Fumorense near Alatri in Lazio, the birth of Saint Peter Celestine, who, when leading the life of a hermit in Abruzzo, being famous for his sanctity and miracles, was elected Roman Pontiff as an octogenarian, assumed the name Celestine V, but abandoned his office that same year and preferred to return to solitude.

A persistent tradition identifies Celestine V as the nameless figure Dante Alighieri sees among those in the antechamber of Hell, in the enigmatic verses:

I saw and recognized the shade of him
who due to cowardice made the great refusal.

The first commentators to make this identification included Dante's son Jacopo Alighieri,[24] followed by Graziolo Bambaglioli in 1324. The identification is also considered probable by recent scholars (e.g., Hollander, Barbara Reynolds, Simonelli, Padoan). Petrarch was moved to defend Celestine vigorously against the accusation of cowardice and some modern scholars (e.g., Mark Musa) have suggested Dante may have meant someone else (Esau, Diocletian and Pontius Pilate have been variously suggested).

In 1346, Petrarch declared in his "De vita solitaria" that Celestine's refusal was as a virtuous example of solitary life.[25]

The life of Pope Celestine V is dramatised in the plays L'avventura di un povero cristiano (The Story of a Humble Christian) by Ignazio Silone in 1968 and Sunsets and Glories by Peter Barnes in 1990.

Pope Celestine V's life is the subject of the short story Brother of the Holy Ghost in Brendan Connell's short story collection The Life of Polycrates and Other Stories for Antiquated Children.[26]

Pope Celestine V is the subject of Stefania Del Monte's book "Celestino V. Papa Templare o Povero Cristiano?", published in 2009 and translated into English, with the title "The Story and Legacy of Celestine V", in 2010. [27]