He entered the Benedictine order[2] as a boy, studied at the College de Sorbonne in Paris, and became successively prior of St. Baudil, Abbot of Fécamp, Bishop of Arras, Chancellor of France,[2] Archbishop of Sens and Archbishop of Rouen.[2] As Abbot of Fécamp, he was tasked in 1328 with summoning Edward III of England to pay homage to Philip VI of France for the duchy of Aquitaine.[3] He was made cardinal-priest of Santi Nereo e Achilleo and administrator of the bishopric of Avignon by Benedict XII in 1338 and was chosen to succeed him as pope at the conclave of 1342.[2]

Like his immediate predecessors, he was devoted to France, and he demonstrated his French sympathies by refusing a solemn invitation to return to Rome from the city's people, as well as from the poet Petrarch. He threw a sop to the Romans, however, by reducing the Jubilee term from one hundred years to fifty. He also purchased the sovereignty of Avignon from Queen Joan I of Naples for 80,000 crowns.[4]

Clement VI issued the bull Unigenitus Dei filius on 27 January 1343 to justify the power of the pope and the use of indulgences.[5] This document would later be used in the defence of indulgences after Martin Luther pinned his 95 Theses to a church in Wittenberg on 31 October 1517.[5]

Clement VI reigned during the period of the Black Death. This pandemic swept through Europe (as well as Asia and the Middle East) between 1347 and 1350 and is believed to have killed between a third and two-thirds of Europe's population. During the plague, Clement sought the insight of astronomers for explanation. Johannes de Muris was among the team "of three who drew up a treatise explaining the plague of 1348 by the conjunction of Saturn, Jupiter, and Mars in 1341"[6] Clement VI's physicians advised him that surrounding himself with torches would block the plague. However, he soon became skeptical of this recommendation and stayed in Avignon supervising sick care, burials, and the pastoral care of the dying.[7] He never contracted the disease, even though there was so much death around him that the cities ran out of ground for cemeteries, and he had to consecrate the entire Rhone River so bodies could be thrown into it and considered to be buried in holy ground. One of his physicians, Gui de Chauliac, later wrote the Chirurgia magna. 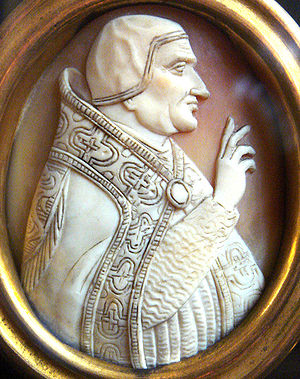 Popular opinion blamed the Jews for the plague, and pogroms erupted throughout Europe. Clement issued two papal bulls in 1348 (6 July and 26 September), the latter named Quamvis Perfidiam, which condemned the violence and said those who blamed the plague on the Jews had been "seduced by that liar, the Devil."[8] He urged clergy to take action to protect Jews as he had done.

Clement continued the struggle of his predecessors with Holy Roman Emperor Louis IV. He excommunicated him after protracted negotiations on 13 April 1346 and directed the election of Charles IV, who received general recognition after the death of Louis in October 1347, ending the schism which had long divided Germany. Clement proclaimed a crusade in 1343, but nothing was accomplished beyond a naval attack on Smyrna on 29 October 1344. He also had a role in the Hungarian invasion of the Kingdom of Naples, namely a papal fief; the contest between Louis I of Hungary and Joan I of Naples, accused to have ordered the assassination of the former's brother, was ended in 1352 by a trial held in Avignon, by which she was acquitted from any charge. Among the other benefits, Clement took advantage of the situation to obtain by her the rights over the city of Avignon.

The other chief incidents of his pontificate were his disputes with King Edward III of England as a result of the latter's encroachments on ecclesiastical jurisdiction, as well as with the kings of Castile and Aragon; his fruitless negotiations for reunion with the Armenians and the Byzantine emperor, John VI Kantakouzenos; and the commencement of Cola di Rienzo's agitation in Rome. He had appointed Cola to a civil position at Rome, and, although at first approving the establishment of the tribunate, he later sent a legate who excommunicated him and, with the help of the aristocratic faction, drove him from the city in December 1347. Clement also excommunicated King Casimir III of Poland and made Prague an archbishopric in 1344.

Unlike the Cistercian Benedict XII, Clement VI was devoted to lavish living and the treasury which he inherited made that lifestyle possible. Upon election as pope he exclaimed as he looked forward to a reign of regal self-indulgence: "My predecessors did not know how to be pope." He claimed to have "lived as a sinner among sinners" in his own words. During his pontificate, he added a new chapel to the Papal Palace and dedicated it to St. Peter. He commissioned the artist Matteo Giovanetti of Viterbo to paint common hunting and fishing scenes on the walls of the existing papal chapels, and purchased enormous tapestries to decorate the stone walls. To bring good music to the celebrations, he recruited musicians from northern France, especially from Liège, who cultivated the Ars Nova style. He liked music so much that he kept composers and theorists close to him throughout his entire pontificate, Philippe de Vitry being among the more famous. The first two payments he made after his coronation were to musicians.[9]

Clement VI died in December 1352, leaving the reputation of "a fine gentleman, a prince munificent to profusion, a patron of the arts and learning, but no saint".[10] His body was placed on exhibit in the Notre Dame-des-Doms, then interred at the abbey of La Chaise-Dieu.[11] The funeral procession was accompanied by the five cardinals that were his family members, as well as the Count William Roger of Beaufort, his brother.[12]