His pontificate was overshadowed by the constant pressure to suppress the Society of Jesus but despite this, he championed their order and also proved to be their greatest defender at that time.

Carlo della Torre di Rezzonico was born in 1693 to a recently ennobled family of Venice, the second of two children of the man who bought the unfinished palace on the Grand Canal (now Ca' Rezzonico) and finished its construction. Born to Giovanni Battista Rezzonico and Vittorio Barbarigo, his brother was Aurelio.

He received a Jesuit education in Bologna and later studied at the University of Padua where he obtained his doctorate in canon law and civil law. From there, he travelled to Rome where he attended the Pontifical Academy of Ecclesiastical Nobles.

Rezzonico became the Referendary of the Apostolic Signatura and remained in that position from 1716 to 1718 when he was appointed as the Governor of Fano. He was then ordained to the priesthood on 23 December 1731 in Rome. Pope Clement XII appointed him to the cardinalate in 1737 as the Cardinal-Deacon of San Nicola in Carcere and also filled various important posts in the Roman Curia.

Rezzonico was chosen as Bishop of Padua in 1743 and he received episcopal consecration in Rome by Pope Benedict XIV himself. Rezzonico visited his diocese on frequent occasions and reformed the way that the diocese ran, paying attention to the social needs of the diocese. He was the first to do this in five decades.[2] He later opted to become the Cardinal-Priest of Santa Maria in Aracoeli in 1747 and later to become the Cardinal-Priest of San Marco in 1755.[3]

Pope Benedict XIV died of gout in 1758 and the College of Cardinals gathered at the papal conclave in order to elect a successor. Direct negotiations between the rival factions resulted in the proposal for the election of Rezzonico. On the evening of 6 July 1758, Rezzonico received 31 votes out of a possible 44, one more than the required amount. He selected the pontifical name of "Clement XIII" in honor of Pope Clement XII, who elevated him to the cardinalate.

Rezzonico was crowned as pontiff on 16 July 1758 by the protodeacon, Cardinal Alessandro Albani.

In the same year, the Rezzonico family celebrated Ludovico Rezzonico's marriage into the powerful Savorgnan family. Rezzonico was notorious for his rampant nepotism throughout his pontificate.

Notwithstanding the meekness and affability of his upright and moderate character, he was modest to a fault (he had the classical sculptures in the Vatican provided with mass-produced fig leaves) and generous with his extensive private fortune.

Clement XIII's pontificate was repeatedly disturbed by disputes respecting the pressures to suppress the Jesuits coming from the progressive Enlightenment circles of the philosophes in France.

Clement XIII placed the Encyclopédie of D'Alembert and Diderot on the Index, but this index was not as effective as it had been in the previous century. More unexpected resistance came from the less progressive courts of Spain, the Two Sicilies, and Portugal. In 1758 the reforming minister of Joseph I of Portugal (1750–77), the Marquis of Pombal, expelled the Jesuits from Portugal, and transported them all to Civitavecchia, as a "gift for the Pope." In 1760, Pombal sent the papal nuncio home and recalled the Portuguese ambassador from the Vatican. The pamphlet titled the Brief Relation, which claimed the Jesuits had created their own sovereign independent kingdom in South America and tyrannised the Native Americans, all in the interest of an insatiable ambition and avarice, did damage to the Jesuit cause as well. 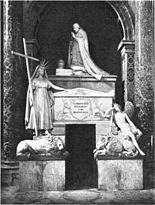 On 8 November 1760, Clement XIII issued a Papal bull Quantum ornamenti, which approved the request of King Charles III of Spain to invoke the Immaculate Conception as the Patroness of Spain, along with its eastern and western territories, while continuing to recognize Saint James the Greater as co-patron.

In France, the Parlement de Paris, with its strong upper bourgeois background and Jansenist sympathies, began its campaign to expel the Jesuits from France in the spring of 1761, and the published excerpts from Jesuit writings, the Extrait des assertions, provided anti-Jesuit ammunition (though, arguably, many of the statements the Extrait contained were made to look worse than they were through judicious omission of context). Though a congregation of bishops assembled at Paris in December 1761 recommended no action, Louis XV of France (1715–74) promulgated a royal order permitting the Society to remain in France, with the proviso that certain essentially liberalising changes in their institution satisfy the Parlement with a French Jesuit vicar-general who would be independent of the general in Rome. When the Parlement by the arrêt of 2 August 1762 suppressed the Jesuits in France and imposed untenable conditions on any who remained in the country, Clement XIII protested against this invasion of the Church's rights and annulled the arrêts. Louis XV's ministers could not permit such an abrogation of French law, and the King finally expelled the Jesuits in November 1764.

Clement XIII warmly espoused the Jesuit order in a papal bull Apostolicum pascendi, 7 January 1765, which dismissed criticisms of the Jesuits as calumnies and praised the order's usefulness; it was largely ignored: by 1768 the Jesuits had been expelled from France, the Two Sicilies and Parma. In Spain, they appeared to be safe, but Charles III of Spain (1759–88), aware of the drawn-out contentions in Bourbon France, decided on a more peremptory efficiency. During the night of 2–3 April 1767, all the Jesuit houses of Spain were suddenly surrounded, the inhabitants arrested, shipped to the ports in the clothes they were wearing and bundled onto ships for Civitavecchia. The King's letter to Clement XIII promised that his allowance of 100 piastres each year would be withdrawn for the whole order, should any one of them venture at any time to write anything in self-defence or in criticism of the motives for the expulsion, motives that he refused to discuss, then or in the future.

Much the same fate awaited them in the territories of the Bourbon Duke of Parma and Piacenza, advised by the liberal minister Guillaume du Tillot. In 1768, Clement XIII issued a strong protest (monitorium) against the policy of the Parmese government. The question of the investiture of Parma aggravated the Pope's troubles. The Bourbon Kings espoused their relative's quarrel, seized Avignon, Benevento and Pontecorvo, and united in a peremptory demand for the total suppression of the Jesuits (January 1769).

Driven to extremes, Clement XIII consented to call a consistory to consider the step, but on the very eve of the day set for its meeting he died, not without suspicion of poison, of which, however, there appears to be no conclusive evidence.

Clement XIII died during the night of 2 February 1769 in Rome of an apoplexy. He was laid to rest on 8 February 1769 in the Vatican but his remains were transferred on 27 September 1774 to a monument in the Vatican that had been sculpted by Antonio Canova at the request of Senator Abbondio Rezzonico, the nephew of the late pontiff.

From the Annual Register, for 1758: Pope Clement XIII was "the honestest man in the world; a most exemplary ecclesiastic; of the purest morals; devout, steady, learned, diligent..."