He was a son of the Salian Otto I, Duke of Carinthia, who was a grandson of Otto I, Holy Roman Emperor. Gregory V succeeded Pope John XV when only twenty-four years of age. He was the chaplain of his cousin Emperor Otto III, who presented him as candidate. 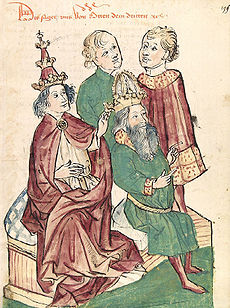 Politically, Gregory V acted consistently as the Emperor's representative in Rome and granted many exceptional privileges to monasteries within the Holy Roman Empire. One of his first acts was to crown Otto III Emperor on 21 May 996.[2] Together, they held a synod a few days after the coronation in which Arnulf, Archbishop of Reims, was ordered to be restored to his See of Reims, and Gerbert of Aurillac, the future Pope Sylvester II, was condemned as an intruder. Robert II of France, who had been insisting on his right to appoint bishops, was ultimately forced to back down, and ultimately also to put aside his wife Bertha, by the rigorous enforcement of a sentence of excommunication on the kingdom.[3]

Until the conclusion of the council of Pavia in 997, Gregory V had a rival in the person of the antipope John XVI (997–998), whom Crescentius II and the nobles of Rome had chosen against the will of the youthful Emperor Otto III, Gregory's cousin. The revolt of Crescentius II was decisively suppressed by the Emperor, who marched upon Rome. John XVI fled, and Crescentius II shut himself up in the Castel Sant'Angelo. The Emperor's troops pursued the antipope, captured him, cut off his nose and ears, cut out his tongue, blinded him, and publicly degraded him before Otto III and Gregory V.[4] He was sent to the monastery of Fulda in Germany, where he lived until 1013. The Castel Sant'Angelo was besieged, and when it was taken in 998, Crescentius II was hanged upon its walls.

Gregory V died suddenly, not without suspicion of foul play, on 18 February 999. He is buried in St. Peter's Basilica near Pope Pelagius I. His successor was Gerbert, who took the name Sylvester II.