Alessandro Ludovisi was born in Bologna in 1554 to Pompeo Ludovisi, the Count of Samoggia (now Savigno in the Province of Bologna) and of Camilla Bianchini. He was one of seven children and was born as the third child. 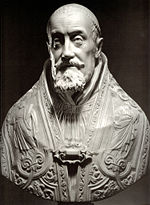 He was educated at the Roman College run by the Society of Jesus in Rome and he then went to the University of Bologna to get degrees in canon and Roman law which he received on June 4, 1575. His early career was as a papal jurist in Rome, and there is no evidence that he had been ordained to the priesthood.

On 12 March 1612, Pope Paul V appointed him as the Archbishop of Bologna, for which he was presumably ordained to the priesthood and then he was consecrated a bishop on 1 May of that year in the church of San Andrea al Quirinale in Rome.

In August 1616, the pope sent him as Apostolic Nuncio to the Duchy of Savoy, to mediate between Charles Emmanuel I, Duke of Savoy and Philip III of Spain in their dispute concerning the Gonzaga Marquisate of Montferrat.[2]

On 19 September 1616, Pope Paul V elevated him to the rank of cardinal and appointed him as a Cardinal Priest with the titular church of Santa Maria in Traspontina.

Ludovisi remained in his episcopal see in Bologna until he went to Rome after the death of Pope Paul V to take part in the conclave at which he was chosen as pope and he selected the pontifical name of "Gregory XV". He was crowned on 14 February 1621 by the protodeacon, Cardinal Andrea Baroni Peretti Montalto and assumed possession of the Basilica of Saint John Lateran on 14 May 1621.

At the moment of his election, chiefly through the influence of Cardinal Borghese, at his advanced age (he was 67) and with his weak state of health he saw at once that he would need an energetic man, in whom he could place implicit confidence, to assist him in the government of the Church. His nephew Ludovico Ludovisi, a young man of 25 years, seemed to him to be the right person and, at the risk of being charged with nepotism, he created him cardinal on the third day of his pontificate. On the same day, his youngest brother Orazio was appointed Captain General of the Church at the head of the papal army. 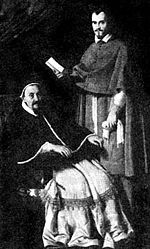 The future revealed that Gregory XV was not disappointed in his nephew. The Catholic Encyclopedia allows that "Ludovico, it is true, advanced the interests of his family in every possible way, but he also used his brilliant talents and his great influence for the welfare of the Church, and was sincerely devoted to the pope." Gregory secured for the Ludovisi two dukedoms, one for his brother Orazio, made a Nobile Romano and Duke of Fiano Romano, 1621, and the other, the Duchy of Zagarolo, purchased from the Colonna family by his nephew Ludovico Ludovisi in 1622. A second nephew, Niccolò, was made reigning Prince of Piombino and Lord of the Isola d'Elba in 1634, having married the heiress, 30 March 1632.

Gregory XV interfered little in European politics, beyond assisting Ferdinand II, Holy Roman Emperor, and the Catholic League against the Protestants—to the tune of a million gold ducats—as well as Sigismund III Vasa, King of the Polish–Lithuanian Commonwealth, against the Ottoman Empire. His Declaration against Magicians and Witches (Omnipotentis Dei, 20 March 1623) was the last papal ordinance against witchcraft. Former punishments were lessened, and the death penalty was limited to those who were "proved to have entered into a compact with the devil, and to have committed homicide with his assistance".

He was a learned theologian and manifested a reforming spirit. As an example, his papal bull of 15 November 1621, Aeterni Patris, regulated papal elections, which henceforth were to be by secret ballot; three methods of election were allowed: by scrutiny, compromise and quasi-inspiration. On 6 January 1622, he established the Congregation for the Propagation of the Faith, the missionary arm of the Holy See. His pontificate was marked by the canonizations of Teresa of Avila, Francis Xavier, Ignatius Loyola, Philip Neri and Isidore the Farmer. He also beatified Peter of Alcantara. He was influential in bringing the Bolognese artist Guercino to Rome, a landmark in the development of the High Baroque style. He sat for his portrait busts, one of which was by Gian Lorenzo Bernini and by Alessandro Algardi, whose restrained bust in a tondo is in the Church of Santa Maria in Vallicella. 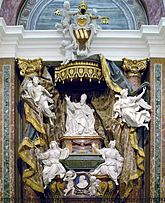 Gregory XV died in the Quirinal Palace on 8 July 1623 and was buried in the Church of Sant'Ignazio. He was succeeded by Pope Urban VIII.