He took a hard stance against nepotism in the church, continuing the policies of Pope Innocent XI, who started the battle against nepotism. To that end, he issued a papal bull strictly forbidding it.

Antonio Pignatelli was born on 13 March 1615 in Spinazzola (now in Apulia) to one of the most aristocratic families of the Kingdom of Naples, which had included several Viceroys and ministers of the crown. He was the fourth of five children of Francesco Pignatelli and Porzia Carafa. His other siblings were Marzio, Ludovico, Fabrizio and Paola Maria.

He was educated at the Collegio Romano in Rome where he earned a doctorate in both canon and civil law.

At the age of 20 he became an official of the court of Pope Urban VIII. Pignatelli was the Referendary of the Apostolic Signatura and served as the Governor of Fano and Viterbo. Later he went to Malta where he served as an inquisitor from 1646 to 1649.[1] Shortly after this, he received his priestly ordination. 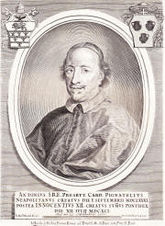 Pignatelli was made Titular Archbishop of Larissa in 1652 and received episcopal consecration in Rome. Pignatelli served as the Apostolic Nuncio to Poland from 1660 to 1668 and later in Austria from 1668 to 1671. He was transferred to Leece in 1671. Pope Innocent XI appointed him as the Cardinal-Priest of San Pancrazio in 1681 and then moved him to the see of Faenza in 1682. He was moved to his final post as Archbishop of Naples in 1686. 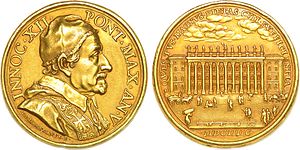 After five months, Cardinal Pignatelli emerged as a compromise candidate between the cardinals of France and those of the Holy Roman Empire.[1] Pignatelli took his new name in honour of Pope Innocent XI and was crowned on 15 July 1691 by the protodeacon, Cardinal Urbano Sacchetti. He took possession of the Basilica of Saint John Lateran on 13 April 1692.

Immediately after his election on 12 July 1691, Innocent XII declared his opposition to the nepotism which had afflicted the reigns of previous popes. The following year he issued the papal bull, Romanum decet Pontificem, banning the curial office of the Cardinal-Nephew and prohibiting popes from bestowing estates, offices, or revenues on any relative. Further, only one relative (and only "if otherwise suitable") was to be raised to the cardinalate.

At the same time he sought to check the simony in the practices of the Apostolic Chamber and to that end introduced a simpler and more economical manner of life into his court. Innocent XII said that "the poor were his nephews" and compared his public beneficence to the nepotism of many predecessors.

Innocent XII also introduced various reforms into the States of the Church including the Forum Innocentianum, designed to improve the administration of justice dispensed by the Church. In 1693 he compelled French bishops to retract the four propositions relating to the Gallican Liberties which had been formulated by the assembly of 1682.

In 1699, he decided in favour of Jacques-Benigne Bossuet in that prelate's controversy with Fénelon about the Explication des Maximes des Saints sur la Vie Intérieure of the latter. Innocent XII's pontificate also differed greatly from his predecessors' because of his leanings towards France instead of Germany; the first in the 20 years following France's failure to have its candidate elected in 1644 and 1655. 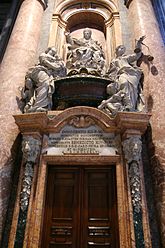 Innocent XII died on 27 September 1700 and was succeeded by Pope Clement XI (1700–1721). His tomb at St. Peter's Basilica was sculpted by Filippo della Valle.

Innocent XII appears as one of the narrators in Robert Browning's long poem "The Ring and the Book" (1869), based on the true story of the pope's intervention in a historical murder trial in Rome during his papacy.

Innocent is notable for being the last bearded pope to date.[2]