From Infogalactic: the planetary knowledge core
Jump to: navigation, search
For the Coptic pope, see Pope John VII of Alexandria.

John VII had good relations with the Lombards, who then ruled much of Italy. However, his relations with Justinian II, the Byzantine Emperor, were far from smooth. Papal relations with Byzantium had soured over the Quinisext (or Trullan) council of 692. Scholarly debate contests John VII's stance on the Canons.[6][7][8] He did not ratify the Canons, which were deeply unpopular in Italy. Nonetheless, he was criticized, most unusually, by the Liber Pontificalis for not signing them:

He [Emperor Justinian II] despatched two metropolitan bishops, also sending with them a mandate in which he requested and urged the pontiff [John VII] to gather a council of the apostolic church, and to confirm such of them as he approved, and quash and reject those which were adverse. But he, terrified in his human weakness, sent them back to the prince by the same metropolitans without any emendations at all.[9]

Several monuments in Rome are connected with John. The most notable is the Church of St. Maria Antiqua at the foot of the Palatine Hill. Traces of an episcopal palace Episcopium associated with John have been discovered upon the Palatine.[10] John VII also constructed an Oratory dedicated to the Theotokos. The Oratory was located within the Old basilica of St. Peter. Fragments of the mosaic decoration can be found in the Vatican grottoes. Furthermore, a sizeable icon, known as the Madonna della Clemenza and housed in Santa Maria in Trastevere, is believed to have been commissioned under the patronage of John.[11] He also restored the monastery of Subiaco, destroyed by the Lombards in 601.

John VII died 18 October, 707 and was buried in the Chapel of the Blessed Virgin Mary which had been added on to St. Peter's.[12] He was succeeded by Sisinnius. 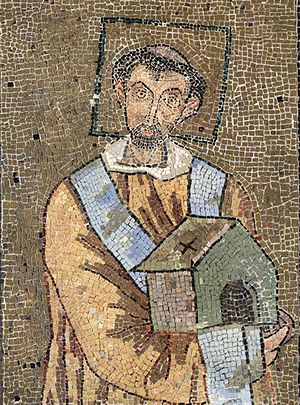 A mosaic of Pope John VII.