From Infogalactic: the planetary knowledge core
Jump to: navigation, search
For information on the medical author often identified with the pope, see Peter of Spain. 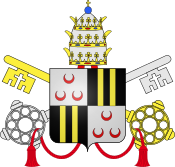 Pope John XXI (Latin: Ioannes XXI; c. 1215 – 20 May 1277), born Peter Juliani (Latin: Petrus Iulianus; Portuguese: Pedro Julião), was Pope from 8 September 1276 to his death in 1277. Apart from Damasus I (from Roman Lusitania), he has been the only Portuguese pope.[1] He is usually identified with the logician and herbalist Peter of Spain (Latin: Petrus Hispanus; Portuguese: Pedro Hispano), which would make him the only pope to have been a physician.[1]

Pedro Julião was probably born in Lisbon between 1210 and 1220. He started his studies at the episcopal school of Lisbon Cathedral and later joined the University of Paris, although some historians claim that he was educated at Montpellier. Wherever he studied, he concentrated on medicine, theology, logic, physics, metaphysics, and Aristotle's dialectic. He is traditionally and usually identified with the medical author Peter of Spain, an important figure in the development of logic and pharmacology. Peter of Spain taught at the University of Siena in the 1240s and his Summulae Logicales was used as a university textbook on Aristotelian logic for the next three centuries. At the court in Lisbon, he was the councilor and spokesman for King Afonso III in church matters. Later,[when?] he became prior of Guimarães.

He was Archdeacon of Vermoim (Vermuy) in the Archdiocese of Braga.[2] He tried to become bishop of Lisbon but was defeated. Instead, he became the Master of the school of Lisbon. Peter became the physician of Pope Gregory X (1271–76) early in his reign. In March 1273[citation needed] he was elected Archbishop of Braga, but did not assume that post; instead, on 3 June 1273, Pope Gregory X created him Cardinal Bishop of Tusculum (Frascati).[3]

After the death of Pope Adrian V on 18 August 1276, Peter was elected Pope on 8 September.[1] He was crowned a week later on 20 September. One of John XXI's few acts during his brief reign was the reversal of a decree recently passed at the Second Council of Lyon (1274); the decree had not only confined cardinals in solitude until they elected a successor Pope, but also progressively restricted their supplies of food and wine if their deliberations took too long. Though much of John XXI's brief papacy was dominated by the powerful Cardinal Giovanni Gaetano Orsini, who succeeded him as Pope Nicholas III. John attempted to launch a crusade for the Holy Land, pushed for a union with the Eastern church, and did what he could to maintain peace between the Christian nations. He also launched a mission to convert the Tatars, but he died before it could start.[4] To secure the necessary quiet for his medical studies, he had an apartment added to the papal palace at Viterbo, to which he could retire when he wished to work undisturbed. On 14 May 1277, while the pope was alone in this apartment, it collapsed; John was buried under the ruins and died on 20 May in consequence of the serious injuries he had received. He was buried in the Duomo di Viterbo, where his tomb can still be seen.

After his death, it was rumored that John XXI had actually been a necromancer, a suspicion frequently directed towards the few scholars among medieval popes (see, e.g., Sylvester II). It was also said that his death had been an act of God, stopping him from completing a heretical treatise.[5] Since the works of "Peter of Spain" continued to be studied and appreciated, however, Dante Alighieri placed "Pietro Spano" in his Paradiso's Heaven of the Sun with the spirits of other great religious scholars.