Distinguished as an effective diplomat, he was elected to the papacy as a compromise candidate after the death of Paul III. As pope he made only reluctant and short-lived attempts at reform, mostly devoting himself to a life of personal pleasure. His reputation, and that of the Catholic Church, were greatly harmed by his scandal-ridden relationship with his adopted nephew.[1]

Giovanni Maria Ciocchi del Monte was born in Monte San Savino. He was educated by the humanist Raffaele Brandolini Lippo, and later studied law at Perugia and Siena. During his career, he distinguished himself as a brilliant canonist rather than as a theologian.[2]

Del Monte was the nephew of Antonio Maria Ciocchi del Monte, Archbishop of Manfredonia (1506–1511). When his uncle exchanged this see for a position as a Cardinal in 1511, Giovanni Maria Ciocchi del Monte succeeded in Manfredonia in 1512. In 1520, del Monte also became bishop of Pavia. Popular for his affable manner and respected for his administrative skills, he was twice governor of Rome and was entrusted by the curia with several duties. At the Sack of Rome (1527) he was one of the hostages given by Pope Clement VII to the Emperor's forces, and barely escaped execution.[2] Pope Paul III made him Cardinal-bishop of Palestrina in 1536 and employed him in several important legations, notably as papal legate and first president of the Council of Trent (1545/47) and then at Bologna (1547/48).

Paul III died on 10 November 1549, and in the ensuing conclave the forty-eight cardinals were divided into three factions: of the primary factions, the Imperial faction wished to see the Council of Trent reconvened, the French faction wished to see it dropped. The Farnese faction, loyal to the family of the previous Pope, supported the election of Paul III's grandson, Cardinal Alessandro Farnese, and also the family's claim to the Duchy of Parma, which was contested by Emperor Charles V.

Neither the French nor the Germans favoured del Monte, and the Emperor had expressly excluded him from the list of acceptable candidates, but the French were able to block the other two factions, allowing del Monte to promote himself as a compromise candidate and be elected on 7 February 1550.[3] Ottavio Farnese, whose support had been crucial to the election, was immediately confirmed as Duke of Parma. 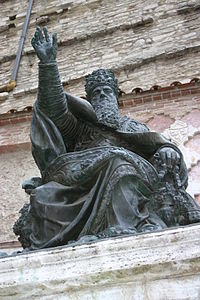 At the start of his reign Julius had desired seriously to bring about a reform of the Catholic Church and to reconvene the Council of Trent, but very little was actually achieved during his five years in office. In 1551, at the request of Emperor Charles V, he consented to the reopening of the council of Trent and entered into a league against the duke of Parma and Henry II of France (1547–59), but soon afterwards made terms with his enemies and suspended the meetings of the council (1553).[4]

Julius increasingly contented himself with Italian politics and retired to his luxurious palace at the Villa Giulia, which he had built for himself close to the Porta del Popolo. From there he passed the time in comfort, emerging from time to time to make timid efforts to reform the Church through the reestablishment of the reform commissions. He was a friend of the Jesuits, to whom he granted a fresh confirmation in 1550; and through the Papal bull, Dum sollicita of August 1552, he founded the Collegium Germanicum, and granted an annual income.[5]

During his pontificate, Catholicism was restored in England under Queen Mary in 1553. Julius sent Cardinal Reginald Pole as legate with powers that he could use at his discretion to help the restoration succeed.[6] In February 1555, an envoy was dispatched from the English parliament to Julius to inform him of the country's formal submission, but the pope died before the envoy reached Rome.

Shortly before his death, Julius dispatched Cardinal Giovanni Morone to represent the interests of the Holy See at the Peace of Augsburg.[7]

Julius' papacy was marked by scandals, the most notable of which is centered around the pope's adoptive nephew, Innocenzo Ciocchi Del Monte. Innocenzo del Monte was a teenaged beggar found in the streets of Parma who was hired by the family as a lowly hall boy in their primary residence,[8] the boy's age being variously given as 14, 15 or 17 years. After the elevation of Julius to the papacy, Innocenzo Del Monte was adopted into the family by the pope's brother and by Julius was then promptly created cardinal-nephew. Julius showered his favourite with benefices, including the commendatario of the abbeys of Mont Saint-Michel in Normandy and Saint Zeno in Verona, and, later, of the abbeys of Saint Saba, Miramondo, Grottaferrata and Frascati, among others. As rumours began to circle about the particular relationship between the pope and his adoptive nephew, Julius refused to take advice. The cardinals Reginald Pole and Giovanni Carafa warned the pope of the "evil suppositions to which the elevation of a fatherless young man would give rise".[9]

Poet Joachim du Bellay, who lived in Rome through this period in the retinue of his relative, Cardinal Jean du Bellay, expressed his scandalized opinion of Julius in two sonnets in his series Les regrets (1558), hating to see, he wrote, "a Ganymede with the red hat on his head".[10][11] The courtier and poet Girolamo Muzio in a letter of 1550 to Ferrante Gonzaga, governor of Milan, wrote: "They write many bad things about this new pope; that he is vicious, proud, and odd in the head",[12] and the Pope's enemies made capital of the scandal, Thomas Beard, in the Theatre of God's judgement (1597) saying it was Julius' "custome ... to promote none to ecclesisatical livings, save only his buggerers”. In Italy it was said that Julius showed the impatience of a "lover awaiting a mistress" while awaiting Innocenzo's arrival in Rome and boasted of the boy's prowess in bed, while the Venetian ambassador reported that Innocenzo Del Monte shared the pope's bed "as if he [Innocenzo] were his [Julius'] own son or grandson."[10] "The charitably-disposed told themselves the boy might after all be simply his bastard son."[8]

Despite the damage which the scandal was inflicting on the church, it was not until after Julius' death in 1555 that anything could be done to curb Innocenzo's visibility. He underwent temporary banishment following the murder of two men who had insulted him, and then again following the rape of two women. He tried to use his connections in the College of Cardinals to plead his cause but his influence waned and he died in obscurity. He was buried in Rome in the Del Monte family chapel. One outcome of the cardinal-nephew scandal, however, was the upgrading of the position of Papal Secretary of State, as the incumbent had to take over the duties Innocenzo Del Monte was unfit to perform: the Secretary of State eventually replaced the cardinal-nephew as the most important official of the Holy See.[13]

The pope's lack of interest in political or ecclesiastical affairs caused dismay among his contemporaries. He spent the bulk of his time, and a great deal of papal money, on entertainments at the Villa Giulia, created for him by Vignola, but more significant and lasting was his patronage of the great Renaissance composer Giovanni Pierluigi da Palestrina, who he brought to Rome as his maestro di cappella, Giorgio Vasari, who supervised the design of the Villa Giulia, and Michelangelo, who worked there.

In the novel Q by Luther Blissett, Julius appears toward the end of the book as a moderate cardinal favouring religious tolerance, in the upheavals caused by the Reformation and the Roman Church's response during the 16th century. His election as pope and the subsequent unleashing of the Inquisition form the last chapters of the novel.