Pope Saint Leo IV (790 – 17 July 855) was Pope from 10 April 847 to his death in 855.[1] He is remembered for repairing Roman churches that had been damaged during Arab raids on Rome, and for organizing a league of Italian cities who fought the sea Battle of Ostia against the Saracens.

A Roman by birth, he was unanimously chosen to succeed Sergius II. When he was elected, on 10 April 847, he was cardinal of Santi Quattro Coronati and had been subdeacon of Gregory IV and archpriest under his predecessor. His pontificate was chiefly distinguished by his efforts to repair the damage done by the Saracens during the reign of his predecessor to various churches of the city, especially those of St Peter and St Paul.

The Saracens were besieging Gaeta, which led to Leo's order that the walls of the city be restored and strengthened between 848 and 849. When the Muslims approached Portus, he summoned the Repubbliche Marinare (or mariner cities of Italy) – Naples, Gaeta and Amalfi – to form a league. The command of the unified fleet was given to Cesarius, son of Duke Sergius I of Naples. The subsequent Battle of Ostia was one of the most famous in history of the papacy of the Middle Ages and is celebrated in a famous fresco by Raphael and his pupils in his Rooms of the Vatican Palace in the Vatican City. Another episode of Leo's life celebrated by the Urbinate in his series of frescoes for the Incendio di Borgo is the burning of the pilgrims' district of Rome (the "Borgo"), which, according to the legend, was stopped by Leo simply making the sign of the cross.

In order to counter the Saracen menace definitively, Leo ordered a new line of walls encompassing the suburb on the right bank of the Tiber to be built, including St. Peter's Basilica, which had been undefended until this time. The district enclosed by the walls is still known as the Leonine City, and corrensponds to the later rione of Borgo. He also restored and embellished the damaged Basilica di San Paolo fuori le Mura and St. Peter's: the latter's altar again received its gold covering (after being stolen), which weighed 206 lb. and was studded with precious gems. Following the restoration of St. Peter's, Leo appealed to the Christian kingdoms to confront the Arab raiders.[2]

Leo IV held three synods, one in 850 that was distinguished by the presence of Holy Roman Emperor Louis II, but the other two of little importance. The history of the papal struggle with Hincmar of Reims, which began during Leo's pontificate, belongs properly to that of Nicholas I.

Leo IV died on 17 July 855 and was buried in St. Peter's Basilica. Benedict III was Leo's immediate successor. A medieval tradition claimed that a woman, Pope Joan, succeeded him, disguising herself as a man, but Joan is generally believed to be fictitious.

Leo IV was originally buried in his own monument, however some years after his death, his remains were put into a tomb that contained the first four Pope Leos. In the 18th century, the relics of Leo the Great were separated from the other Leos and given their own chapel.[3]

Leo IV had the figure of a rooster placed on the Old St. Peter's Basilica or old Constantinian basilica[4] which has served as a religious icon and reminder of Peter's denial of Christ since that time, with some churches still having the cockerel on the steeple today. It is reputed that Pope Gregory I had previously said that the cock (rooster) "was the most suitable emblem of Christianity", being "the emblem of St Peter".[5][6] After Leo IV, Pope Nicholas I, who had been made a deacon by Leo IV, decreed that the figure of the cock (rooster) should be placed on every church.[7] 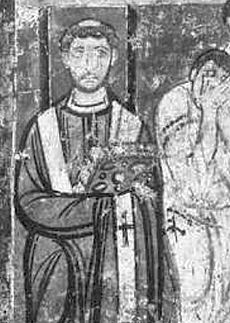