He was born at Genazzano, the son of Agapito Colonna and Caterina Conti, between January 26 and February 20, 1369.[2] He belonged to one of the oldest and most distinguished families of Rome. His brother Giordano became Prince of Salerno and Duke of Venosa, while his sister Paola was Lady of Piombino between 1441 and 1445.

Oddone most likely studied at the University of Perugia.[3] He became apostolic protonotary under Pope Urban VI (1378–89), and was created Cardinal-Deacon of San Giorgio al Velabro by Pope Innocent VII in 1405.

In 1409 he took part in the Council of Pisa, and was one of the supporters of Antipope Alexander V.[3] Later he confirmed his allegiance to Alexander's successor, John XXIII, by whom his family obtained several privileges, while Oddone obtained for himself the vicariate of Todi, Orvieto, Perugia and Umbria. He was excommunicated for this in 1411 by Pope Gregory XII. Oddone was with John XXIII's entourage at the Council of Constance and followed him in his escape at Schaffhausen on 21 March 1415. Later he returned to Constance and took part in the process leading to the deposition of John XXIII.[3]

After deposing Antipope John XXIII in 1415, the Council of Constance was long divided by the conflicting claims of Pope Gregory XII (1406–15) and Antipope Benedict XIII (1394–1423). Martin was elected pope, at the age of 48, at the Council of Constance on St. Martin's Day, 11 November 1417,[4] by a conclave consisting of twenty-three cardinals and thirty delegates of the council.

Martin left Constance at the close of the council (May 1418), but travelled slowly through Italy and lingered at Florence. His authority in Rome was represented by his brother Giordano, who had fought under Muzio Attendolo against the condottiero Braccio da Montone. The Pope at the time ruled only Rome (when not rebellious) and its environs: Braccio held Umbria, Bologna was an independent commune, while much of Romagna and the Marche was held by local "vicars", which were in fact petty hereditary lords.[3] In particular, Martin confirmed Giorgio Ordelaffi in Forlì, Ludovico Alidosi in Imola, Malatesta IV Malatesta in Rimini, and Guidantonio da Montefeltro in Spoleto, who would later marry the pope's niece Caterina Colonna. 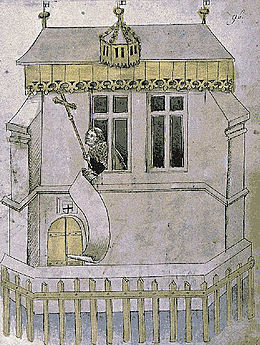 In exchange for the recognition of Joan II of Naples, Martin obtained the restitution of Benevento, several fiefs in the Kingdom of Naples for his relatives and, above all, an agreement that Muzio Attendolo, then hired by the Neapolitans, should leave Rome.[4]

After a long stay in Florence, Martin was thus able to enter Rome in September 1420. He at once set to work, establishing order and restoring the dilapidated churches, palaces, bridges, and other public structures. For this reconstruction he engaged some famous masters of the Tuscan school, and thus laid the foundation for the Roman Renaissance.[4]

When the "nations" of the council pressed their plans for reform, Martin V submitted a counter-scheme and ultimately entered into negotiations for separate concordats, for the most part vague and illusory, with the Holy Roman Empire, England and France.

By 1415 Bohemia was in turmoil and the subject of much discussion at the Council of Constance. Adherents of Jan Hus adopted the practice of Communion under both kinds. The Council sent earnest letters to the civil and ecclesiastical authorities in Bohemia, insisting they deal with the heresy. Bohemian and Moravian nobles responded that the sentence on Hus was unjust and insulting to their country, and promised to protect priests against episcopal prosecutions for heresy. Prague was placed under interdict for sheltering the excommunicate Johann of Jesenic. Beghards arrived attracted by Bohemia's reputation for religious liberty.[5]

In 1419 King Wenceslaus, who had resisted what he considered interference in his kingdom, commanded that all ejected Catholic beneficiaries should be reinstated in their offices and revenues. Prague prepared for armed resistance. Johann of Jesenic led a procession to the town hall, where under the leadership of Ziska of Troznow, a noble of southern Bohemia, the building was stormed and people found inside were thrown out of the windows on to the spears and swords of the processionists, and hacked to pieces. In Kuttenberg, hundreds of captured Hussites were thrown by the miners into the shafts of disused silver mines. King Wenceslaus swore death to all the rebels, but died of a stroke in August, 1419. The next months were marked by deeds of violence; many citizens, especially Germans, had to flee.[5]

Wenceslaus was succeeded by his brother Sigismund, German Emperor and King of Hungary, who prepared to restore order. On 1 March, 1420, Pope Martin V issued a Bull inviting all Christians to unite in a crusade against the Wycliffites, Hussites, and other heretics.[5]

Martin authorized a crusade against Africa in 1418 in relation to the slave trade.[6]

Martin declared two Crusades in 1420. The first was against heretics in Bohemia, as described above. The second was in response to the rising pressure from the Ottoman Empire. In 1419–1420 Martin had diplomatic contacts with the Byzantine emperor Manuel II, who was invoking a council in Constantinople as a move to reduce the pressure from the Ottoman Turks. On 12 July 1420 the Pope conceded to attach an indulgence to anyone who would contribute to a crusade against the latter, which would be led by Sigismund, King of the Romans.[3]

The main concern of Martin's pontificate from 1423 was the resumed war against Braccio da Montone. The following year, the combined Papal-Neapolitan army, led by Giacomo Caldora and Francesco Sforza, defeated him at the Battle of L'Aquila (2 June 1424); Braccio died a few days later.[3]

In the same year Martin obtained a reduction of the autonomy of the commune of Bologna, whose finances would be thenceforth under the authority of a papal treasurer.[3] He also ended the war with Braccio da Montone in exchange for his recognition as vicar[3] and reconciled with the deposed John XXIII, to whom he gave the title of Cardinal of Tusculum.

Canon law prohibited interest upon a loan. To avoid this, annuities were paid, interest in effect but not in name. The dispute as to the legality of annuity contracts was brought before Martin V in 1423. He held that purchased annuities, which were redeemable at the option of the seller, were lawful.[7][8] When the lawfulness of annuities was established, they were widely used in commerce; it seems that city states used them to raise compulsory loans from their citizens.

A decree of the Council of Constance ordered that councils should be held every five years. In accordance, Martin V summoned a council in 1423 that met first at Pavia and later at Siena (the "Council of Siena"). It was rather poorly attended, which gave the Pope a pretext for dissolving it, as soon as it had come to the resolution that "internal church union by reform ought to take precedence over external union". It was prorogued for seven years. The seventeenth council then met at Basel (as the "Council of Basel") in February 1431 shortly before Martin's death.

Position on the Jews

The excitement of the Church during the Hussite movement rendered the Jews apprehensive, and through Emperor Sigismund, they obtained from Pope Martin V various bulls (1418 and 1422) in which their former privileges were confirmed and in which he exhorted the friars to use moderate language. In the last years of his pontificate, however, he repealed several of his ordinances. A gathering, convoked by the Jews in Forlì, sent a deputation asking Pope Martin V to abolish the oppressive laws promulgated by Antipope Benedict XIII. The deputation succeeded in its mission.[9]

Slavery was commonplace in Europe, Africa, and Asia during Martin's reign and was accepted by "almost everyone" with few arguing against it.[10] During the 15th century, sentiment in Europe increasingly turned against the enslavement of Christians and the Church denounced such practices, but this did not extend to unbelievers.

Norman Housley finds it "... hard to avoid the conclusion that the pope was agreeing to whatever was asked of him by the king. ...political weakness compelled the Renaissance Papacy to adopt an acquiescent and unchallenging position when approached for requests for privileges in favour of these ventures."[11]

According to Burton, Martin authorized a crusade against Africa in 1418 and this coupled with a later bull (1441) sanctioned the Portuguese trade in African slaves.[6] In March 1425 a bull was issued that threatened excommunication for any Christian slave dealers and ordered Jews to wear a "badge of infamy" to deter, in part, the buying of Christians.[12] In June 1425 Martin anathematized those who sold Christian slaves to Muslims.[10] Traffic in Christian slaves was not banned, purely the sale to non-Christian owners.[13] The papal bull of excommunication issued to the Genoese merchants of Caffa related to the buying and selling of Christians, but has been considered ineffectual as prior injunctions against the Viennese, including the Laws of Gazaria, made allowances for the sale of both Christian and Muslim slaves.[14] Ten black African slaves were presented to Martin by Prince Henry of Portugal.[15] Martin supported colonial expansion.[16] Davidson (1961) argues that Martin's injunction against slavery was not a condemnation of slavery itself, but rather driven through fear of "infidel power".[17]

During his permanence in Rome, Martin moved his residence from St. Peter to Santa Maria Maggiore and, from 1424, the Basilica of Santi Apostoli near the Palazzo Colonna. He also frequently sojourned in towns held by his family in the Latium (Tivoli, Vicovaro, Marino, Gallicano and others).

When the second Pope to take the name Martin was elected in 1281, there was confusion over how many Popes had taken the name before. It was believed then that there were three, so the new Pope of 1281 became Martin IV. But, in reality, those believed to be Martin II and Martin III were actually named Marinus I and Marinus II, although they are sometimes still referred to as "Martin II" and "Martin III". This has advanced the numbering of all subsequent Popes Martin by two. Popes Martin IV–V were actually the second and third popes by that name.