A monk of the Cluniac order, he was created Cardinal-Priest of San Clemente by Pope Gregory VII (1073–85) in 1073. He was consecrated as pope in succession to Pope Urban II (1088–99) on 19 August 1099. His reign of almost twenty years was exceptionally long for a pope of the Middle Ages.

He was born in Bleda, near Forlì, Romagna. In the long struggle with the Holy Roman Emperors over investiture, he zealously carried on the Hildebrandine policy in favor of papal privilege, but with only partial success. The future Emperor Henry V took advantage of his father's excommunication to rebel, even to the point of seeking out Paschal II for absolution for associating with his father, Henry IV.[1] But, Henry V was even more persistent in maintaining the right of investiture than Emperor Henry IV had been before his death in 1105. The imperial Diet at Mainz invited Paschal II to visit Germany and settle the trouble in January 1106, but the Pope in the Council of Guastalla (October 1106) simply renewed the prohibition of investiture.[2]

In the same year he brought to an end the investiture struggle in England, in which Anselm, archbishop of Canterbury, had been engaged with Henry I of England, by retaining to himself exclusive right to invest with the ring and crozier, but recognizing the royal nomination to vacate benefices and the oath of fealty for temporal domains. Paschal went to France at the close of 1106 to seek the mediation of Philip I of France and Prince Louis in the imperial struggle, but he returned to Italy in September 1107, his negotiations remaining without result. When Henry V advanced with an army into Italy in order to be crowned, the Pope agreed to a compact in February 1111 which stipulated that the Church should surrender all the possessions and royalties it had received from the Empire and kingdom of Italy since the days of Charlemagne, while Henry V on his side should renounce lay investiture. Preparations were made for the coronation on 12 February 1111, but the Romans rose in revolt against Henry, and the German king retired, taking the Pope and Curia with him.

After 61 days of harsh imprisonment, during which Prince Robert I of Capua's Norman army was repulsed on its rescue mission, Paschal II yielded and guaranteed investiture to the Emperor. Henry V was then crowned in St. Peter's on 13 April 1111, and, after exacting a promise that no revenge would be taken for what had happened, withdrew beyond the Alps. The Hildebrandine party was aroused to action, however; a Lateran council of March 1112 declared null and void the concessions extorted by violence; a council held at Vienne in October 1111 excommunicated the Emperor; and Paschal II sanctioned the proceeding. Towards the end of his pontificate trouble began anew in England; Paschal II complained in 1115 that councils were held and bishops translated without his authorization, and he threatened Henry I with excommunication. Matilda of Tuscany was said to have bequeathed all her allodial lands to the Church upon her death in 1115, but the donation was neither publicly acknowledged in Rome nor is any documentary record of the donation preserved. Emperor Henry V at once laid claim to Matilda's lands as imperial fiefs and forced the Pope to flee from Rome. Paschal II returned after the Emperor's withdrawal at the beginning of 1118, but died within a few days, on 21 January 1118.

Actions during his reign 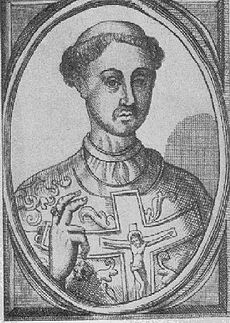 Pope Paschal II ordered the building of the a basilica of Santi Quattro Coronati on the ashes of the one burned during the Norman sack of Rome in 1084.[3]

In 1116, Paschal II, at the behest of Count Ramon Berenguer III, issued a crusade for the capture of Tarragona.[4]

During Paschal's papacy some efforts were made by the Byzantine Emperor Alexios I to bridge the schism between the Orthodox and the Catholic Church, but these failed, as he pressed the demand that the Patriarch of Constantinople recognise the Pope's primacy over "all the churches of God throughout the world" in late 1112. This was something the patriarch could not do in face of opposition from the majority of clergy, the monastic world, and the laity.[5] Paschal's demand remained the status quo condition for re-unification of the Churches, and it has never been achieved.

The first bishop of America was appointed during Paschal II's reign, nearly four centuries before Columbus' first voyage across the Atlantic. Erik Gnupsson was given the province of Greenland and Vinland, the latter believed to refer to what is now Newfoundland.[6]

Pope Paschal II issued the bull "Pie Postulatio Voluntatis" on 15 February 1113.[7] It brought under Papal protection and confirmed as a religious order the Hospital of St John of Jerusalem, later known as the Knights Hospitaller and today known as the Sovereign Military Hospitaller Order of St. John of Jerusalem of Rhodes and of Malta. It also confirmed the order's acquisitions and donations in Europe and Asia and exempted it from all authority save that of the Pope.[8]