Piccolomini was born in Sarteano on 29 May 1439 as the fourth child of Nanno Todeschini and Laudomia Piccolomini, the sister of Aeneas Silvius Piccolomini who was Pope Pius II. His brothers were Antonio, Giacomo and Andrea.[2]

He was received as a boy into the household of Aeneas Silvius who permitted him to assume the name and arms of the Piccolomini family (his brother Antonio being made Duke of Amalfi during the pontificate of Pius II). He studied law at the University of Perugia and obtained a doctorate after the completion of his studies.

Piccolomini was the administrator of the Archdiocese of Siena which his uncle had raised to the status of archbishopric. He was the administrator from 1460 to his own pontifical election. He was granted the title and the insignias of an archbishop in 1459 but didn't receive episcopal consecration. He also served as the protector of England and Germany.

Pope Pius II made his nephew a cardinal on 5 March 1460 in Siena and he was made the Cardinal-Deacon of San Eustachio. Pius II also appointed him in 1460 as the Archbishop of Siena when he was 21.[3] Within the next few months the pope sent him as the legate to the March of Ancona with the experienced Bishop of Marsico as his counsellor. He proved studious and effective in his job. Piccolomini was also the legate to Rome and the rest of the Papal States in 1464 when his uncle left for Ancona.

Piccolomini was made the archdeacon of Brabant in Cambrai in 1462 and he held that until 1503. He participated in the conclave that elected Pope Paul II in 1464 and he was named the legate to Germany in 1471. He served in this important legation for events like the Imperial diet at Regensburg/Ratisbon and remained there for Paul II's entire pontificate. He was still there after the pope died and was absent for the election of Pope Sixtus IV. He became the Cardinal Protodeacon in 1471 and served in a new legation to Umbria for the pope to restore ecclesiastical authority.[4]

He participated in the conclave of 1484 which resulted in the election of Pope Innocent VIII and as the protodeacon announced the election and performed the coronation of the new pope. He was made the administrator of Fermo in 1485 and resigned the position in 1494 in favor of Agostino Piccolomini. He was named once again when the latter stopped in 1496 and he kept that post until his pontifical election. He was also made the legate to Perugia in 1488 and he left in 1489.

He also participated in the conclave of 1492 which elected Pope Alexander VI and as such announced and crowned the new pontiff. He was also made the legate to France in 1493 to meet King Charles VIII and he returned after the monarch did not meet him in 1495. He was named the administrator of the see of Pienza and Montalcino in 1495 and occupied it until 1498 in favor of Girolamo Piccolomini. He was involved in Alexander VI's short-lived effort to reform the Roman Curia following the murder of his son Giovanni Borgia in 1497 and was named a member of a commission of six cardinals.

In 1502 he commissioned a library with access from an aisle of the Duomo di Siena that was intended to house the library of humanist texts assembled by his uncle and commissioned the artist Pinturicchio to fresco its vault and ten narrative panels along the walls depicting scenes from the life of Aeneas Silvius Piccolomini. Its iconography illustrating the donor's career gives an edited version of Pius II's life, passing over his former support of the Antipope Felix V. Though Pinturrichio labored for five years, the books never reached their splendid destination; yet the Piccolomini Library is a monument of the High Renaissance in Siena. Some of Pope Pius III's most famous portraits can be viewed in the Louvre Museum.

Pope Alexander VI died in 1503 and amid the disturbances consequent upon his death, it took the combined pressures of all the ambassadors to induce Cesare Borgia to withdraw from Rome so that an unpressured conclave might take place. Cardinal Piccolomini was elected on 22 September 1503 and he named himself "Pius III" after his uncle Pius II.[5] This selection can be seen as a compromise between factions, Borgia and della Rovere, picking a frail cardinal with long experience in the Roman Curia over the kin of either Sixtus IV or Alexander VI. 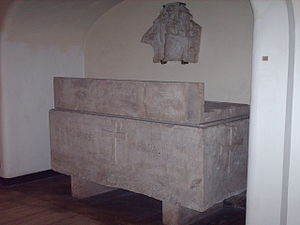 Piccolomini had not been ordained nor consecrated so on 30 September 1503 he received ordination. Cardinal Giuliano della Rovere consecrated him on 1 October 1503 in the Vatican and his coronation took place on 8 October 1503. Cardinal Protodeacon Raffaello Sansoni Riario performed the coronation and several of the features of the celebration had to be omitted due to his frail health.

On 25 September the new pontiff announced the aims of his pontificate:

He supported Cesare Borgia and reconfirmed him as Gonfalonier.

On 13 October he was on his deathbed with gout and after a brief pontificate of 26 days he died on 18 October 1503. He died after celebrating a consistory (he didn't create new cardinals) of an ulcer in the leg or, as some have alleged, of poison administered at the instigation of Pandolfo Petrucci, the ruler of Siena.

He was buried in the chapel of San Andrea in Saint Peter's Basilica next to his uncle as ordered by his brothers Giacomo and Andrea. When the basilica was being rebuilt, the monument was transferred below to the grottoes and the remains of Pius III and his uncle to the church of San Andrea della Valle in Rome put in a mausoleum created by Cardinal Alessandro Damasceni Peretti in 1614.[6]