Pope Pius VII (14 August 1742 – 20 August 1823), born Barnaba Niccolò Maria Luigi Chiaramonti,[lower-alpha 1] reigned as Pope from 14 March 1800 to his death in 1823. Chiaramonti was also a monk of the Order of Saint Benedict in addition to being a well known theologian and bishop throughout his life. When he joined his religious order in 1756, he took the name of Gregory.

In the process towards sainthood, his cause of canonization was started at the behest of Pope Benedict XVI in 2007, and he was granted the posthumous title of Servant of God.

The birthplace of Pius VII.

Barnaba Chiaramonti was born in Cesena in 1742, the son of Count Scipione Chiaramonti. His mother, Giovanna, was the daughter of the Marquess Ghini; through her, the future Pope Pius VII was related to the Braschi family of Pope Pius VI. Though his family was of noble status, they were not wealthy but rather, were of middle-class stock.

Like his brothers, he attended the Collegio dei Nobili in Ravenna but decided to join the Order of Saint Benedict at the age of 14 on 2 October 1756 as a novice at the Abbey of Santa Maria del Monte in Cesena. Two years after this on 20 August 1758, he became a professed member and assumed the name of Gregorio. He taught at Benedictine colleges in Parma and Rome, and was ordained a priest on 21 September 1765.

A series of promotions resulted after his relative, Giovanni Angelo Braschi was elected Pope Pius VI (1775–99). A few years before this election occurred, in 1773, Chiaramonti became the personal confessor to Braschi. In 1776, Pius VI appointed the 34-year-old Dom Gregory, who had been teaching at the Monastery of Sant'Anselmo in Rome, as honorary abbot in commendam of his monastery. Although this was an ancient practice, it drew complaints from the monks of the community, as monastic communities generally felt it was not in keeping with the Rule of St. Benedict.

In December 1782, the pope appointed Dom Gregory as the Bishop of Tivoli, near Rome. Pius VI soon named him, in February 1785, the Cardinal-Priest of San Callisto,[3] and as the Bishop of Imola, an office he held until 1816.[4]

When the French Revolutionary Army invaded Italy in 1797, Cardinal Chiaramonti counseled temperance and submission to the newly created Cisalpine Republic. In a letter that he addressed to the people of his diocese, Chiaramonti asked them to comply "... in the current circumstances of change of government (...)" to the authority of the victorious general Commander-in-Chief of the French army. In his Christmas homily that year, he asserted that there was no opposition between a democratic form of government and being a good Catholic: "Christian virtue makes men good democrats.... Equality is not an idea of philosophers but of Christ...and do not believe that the Catholic religion is against democracy."[5]

Following the death of Pope Pius VI, by then virtually France's prisoner, at Valence in 1799, the conclave to elect his successor met on 30 November 1799 in the Benedictine Monastery of San Giorgio in Venice. There were three main candidates, two of whom proved to be unacceptable to the Habsburgs, whose candidate, Alessandro Mattei, could not secure sufficient votes. However, Carlo Bellisomi also was a candidate, though not favoured by Austrian cardinals; a veto was imposed against him in the name of Franz II.

After several months of stalemate, Jean-Sifrein Maury proposed Chiaramonti as a compromise candidate. On 14 March 1800, Chiaramonti was elected pope, certainly not the choice of die-hard opponents of the French Revolution, and took as his pontifical name Pius VII in honour of his immediate predecessor.[5] He was crowned on 21 March in a rather unusual ceremony, wearing a papier-mâché papal tiara as the French had seized the original when apprehending Pius VI. He then left for Rome, sailing on a barely seaworthy Austrian ship, the Bellona, which lacked even a galley. The twelve-day voyage ended at Pesaro, whence he proceeded to Rome.

One of Pius VII's first acts was appointing the minor cleric Ercole Consalvi, who had performed so ably as secretary to the recent conclave, to the College of Cardinals and to the office of Cardinal Secretary of State. Consalvi immediately left for France, where he was able to negotiate the Concordat of 1801 with the First Consul Napoleon. While not effecting a return to the old Christian order, the treaty did provide certain civil guarantees to the Church, acknowledging "the Catholic, Apostolic, and Roman religion" as that of the "majority of French citizens".[6]

The main terms of the concordat between France and the pope included:

As pope, he followed a policy of cooperation with the French-established Republic and Empire. He was present at the coronation of Napoleon I in 1804. He even participated in France's Continental Blockade of Great Britain, over the objections of his Secretary of State Consalvi, who was forced to resign. Despite this, France occupied and annexed the Papal States in 1809 and took Pius VII as their prisoner, exiling him to Savona. Despite this, the pope continued to refer to Napoleon as "my dear son" but added that he was "a somewhat stubborn son, but a son still".

This exile ended only when Pius VII signed the Concordat of Fontainebleau in 1813. One result of this new treaty was the release of the exiled cardinals, including Consalvi, who, upon re-joining the papal retinue, persuaded Pius VII to revoke the concessions he had made in it. This Pius VII began to do in March 1814, which led the French authorities to re-arrest many of the opposing prelates. Their confinement, however, lasted only a matter of weeks, as Napoleon abdicated on 11 April of that year.[7]As soon as Pius VII returned to Rome, he immediately revived the Inquisition and the Index of Condemned Books.

Pius VII's imprisonment did in fact come with one bright side for him. It gave him an aura that recognized him as a living martyr, so that when he arrived back in Rome in May 1814, he was greeted most warmly by the Italians as a hero.[8]

Relationship with Napoleon I 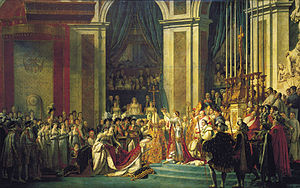 Pope Pius VII presided over the Coronation of Napoleon I.

From the time of his election as pope to the fall of Napoleon in 1815, Pius VII's reign was completely taken up in dealing with France.[9] He and the Emperor were continually in conflict, often involving the French military leader's wishes for concessions to his demands. Pius VII wanted his own release from exile as well as the return of the Papal States, and, later on, the release of the 13 "Black Cardinals", i.e., the Cardinals, including Consalvi, who had snubbed the marriage of Napoleon to Princess Marie Louise, believing that his previous marriage was still valid, and had been exiled and impoverished in consequence of their stand,[10] along with several exiled or imprisoned prelates, priests, monks, nuns and other various supporters.

Restoration of the Jesuits

Main article: Suppression of the Society of Jesus

On 7 March 1801, Pius VII issued the brief "Catholicae fidei" that approved the existence of the Society of Jesus in Russia and appointed its first superior general as Franciszek Kareu. This was the first step in the restoration of the order. On 31 July 1814, he signed the papal bull Sollicitudo omnium ecclesiarum which universally restored the Society of Jesus. He appointed Tadeusz Brzozowski as the Superior General of the order.

Pius VII joined the declaration of the 1815 Congress of Vienna, represented by Cardinal Secretary of State Ercole Consalvi, and urged for the suppression of the slave trade. This pertained particularly to places such as Spain and Portugal where slavery was economically very important. The pope wrote a letter to King Louis XVIII dated 20 September 1814 and to the King of Portugal in 1823 to urge the end of slavery. He rejected the slave trade and defined the sale of people as an injustice to the dignity of the human person. In a letter to the King of Portugal, Pius VII said: "the pope regrets that this trade in blacks, that he believed having ceased, is still exercised in some regions and even more cruel way. He begs and begs the King of Portugal that it implement all its authority and wisdom to extirpate this unholy and abominable shame".

Pius VII issued an encyclical "Diu satis" in order to advocate a return to the values of the Gospel and universalized the feast of Our Lady of Sorrows for 15 September. He condemned Freemasonry and the movement of the Carbonari in the encyclical Ecclesiam a Jesu Christo in 1821. Pius VII asserted that Freemasons must be excommunicated and it linked them with the Carbonari, an anti-clerical revolutionary group in Italy. All members of the Carbonari were also excommunicated.

Pius VII was multilingual and had the ability to speak Italian, French, English and Latin.

Pius VII was a man of culture and attempted to reinvigorate Rome with archaeological excavations in Ostia which revealed ruins and icons from ancient times. He also had walls and other buildings rebuilt and restored the Arch of Constantine. He ordered the construction of fountains and piazzas and erected the obelisk at Monte Pincio.

The pope also made sure Rome was a place for artists and the leading artists of the time like Antonio Canova and Peter von Cornelius. He also enriched the Vatican Library with numerous manuscripts and books. It was Pius VII who adopted the yellow and white flag of the Holy See as a response to the Napoleonic invasion of 1808.

Relationship with the United States 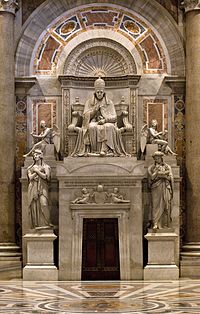 Monument by Bertel Thorvaldsen on the tomb of Pius VII inside the Basilica of St. Peter.

On the United States' undertaking of the First Barbary War to suppress the Muslim Barbary pirates along the southern Mediterranean coast, ending their kidnapping of Europeans for ransom and slavery, Pius VII declared that the United States "had done more for the cause of Christianity than the most powerful nations of Christendom have done for ages."[11]

For the United States, he established several new dioceses in 1808 for Boston, New York City, Philadelphia and Bardstown. In 1821, he also established the dioceses of Charleston, Richmond and Cincinnati.

On 3 June 1816, Pius VII condemned the works of Melkite bishop Germanos Adam. Adam's writings supported conciliarism, the view that the authority of ecumenical councils was greater than that of the papacy.[12]

In 1822, Pius VII reached his 80th birthday and his health was visibly declining. On 6 July 1823, he fractured his hip in a fall in the papal apartments and was bedridden from that point onward. In his final weeks he would often lose consciousness and would mutter the names of the cities that he had been ferried away to by the French forces. With the Cardinal Secretary of State Ercole Consalvi at his side, Pius VII succumbed to his injury on 20 August at 5 a.m. He was briefly interred in the Vatican grottoes but was later buried in a monument in Saint Peter's Basilica after his funeral on 25 August.[13][14]

On 15 August 2007, the Holy See contacted the diocese of Savona-Noli with the news that Pope Benedict XVI had declared nihil obstat (nothing stands against) the cause of beatification of the late pontiff, thus opening the diocesan process for this pope's beatification. He now has the title of Servant of God.[15]

He has since been elected as the patron of the Diocese of Savona.[16]